Baby its Cold Out There! Genealogy and the Weather 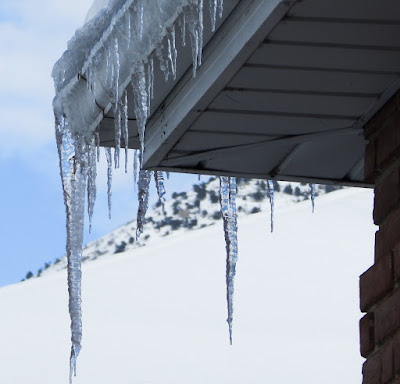 Genealogists with their heads full of names, dates and places often disassociate themselves from the reality of the lives of their ancestors. For example, what was it really like to live in the 1600s? One thing I can tell you is that our ancestors were really aware of the weather. Yesterday, after shoveling snow off and on all day, we started out to the Brigham Young University Family History Library and got a call telling us our shift had been cancelled due to weather. We ended up going to the Library anyway, but it was interesting to have weather be a factor in what we did or did not do.

I began to think about how my ancestors might have been affected by the weather. When I was very young, we lived in a house, high up on the Colorado Plateau, with no central heating. We had a wood burning stove and a fireplace for heat. The temperature up there at almost 6ooo feet above sea level gets down to 20 degrees or more below zero. Years later, central heating was installed but one time, on visiting the house many years after I had moved, we arrived to find the temperature in the house to be -14 degrees Fahrenheit. The pilot light on the heating unit that had been installed had gone out.

Many of us have had experiences with bad weather, but unless we suffer catastrophic weather events, the day to day weather goes almost unnoticed. Some of our ancestors lived without the benefits of our industrialized society. I immediately thought of the Year Without a Summer, 1816. Many of my ancestors were living in New England during this particularly bad time. The cause of the freezing temperatures in July and August was the eruption of Mount Tambora in the Dutch East Indies. This worldwide event affected the lives of anyone living at that time.

It did not take a world level disaster to affect the daily lives of our ancestors. The correlation between weather and mortality has not gone unnoticed (except by the genealogists). Here are some books about the effect of the weather on mortality and life expectancy.


The Potential Impacts of Climate Variability and Change on Temperature-Related Morbidity and Mortality in the United States., 2001.

It is difficult to separate weather related events from the incidence of disease and other natural disasters. But what is certain is that many of the unexplained events that occurred to our ancestors were likely related to one or more of these external causes. Many family histories show multiple deaths in a short period of time. It may be interesting in those cases to see if there is a correlation between the weather or other causes to those events. In my own lines, I have one family that left Ireland in the early 1800s. Their departure is too early to be attributed solely to the Potato Famine, but the general state of agriculture in Ireland at the time certainly was a decisive factor in their decision to come to America.

If you read my posts from time to time, you may have noticed one of my predominant themes is the need for genealogical researchers to become more acquainted with the history and culture of their ancestors, not just their dates and places but the entire social structure surrounding them. Genealogy should not exist in a vacuum. We all need to think more about our ancestors as people and less about them as entries in a program. One benefit of this expanded view of our ancestors is that we will be more accurate and complete in our research.
Posted by James Tanner at 7:28 AM