This is an occasional series chronicling the methodology for attacking a complex genealogical challenge. It is inevitable in this type of genealogical research that you will find yourself ordering copies of documents and looking at microfilm before going too far. But perhaps there are different ways to get started. The subject of my particular investigations is the Parkinson Family of Huntingdonshire, England. Here is the first post in this series:

My relationship to the family is set out in the first post in this series.

The first step is checking for consistency in the places identified in the family line. To do this, I include all of the verified and unverified locations listed in the Family Tree. The time period involved is also important. In this case, the earliest dates for a verified Parkinson ancestor are in the mid-1700s. Charles Parkinson was supposedly born in Great Raveley, Huntingdonshire, England in 1766. There is a christening date in the FamilySearch.org Family Tree for 12 May 1772 in Great Raveley, Huntingdonshire, England, but there are only records showing his marriage and death dates. He also shows up in the 1841 England Census. If you would like to see the sources attached, you can go to Charles Parkinson, ID# 2CY9-YDS in the Family Tree. The first research challenge is to see where the christening date was obtained since none of the records I have located so far contain either birth or christening information about Ramsey or Great Raveley.

Here is a list of all of the place names mentioned by the entries in the Family Tree starting with Thomas Parkinson and omitting places in the United States.

The next step is to look for anomalies. Any incomplete places, such as an event that occurred in "Huntingdonshire, England" or just "England" is a dead giveaway that the research is incomplete and that the entry is more than likely inaccurate or guesswork. For example, a few generations out on the Parkinson line shows the following as a spouse of a supposed ancestor named Daniel Scott, b. 1727 in Huntingdonshire, England, who was christened 12 Jun 1727 in Fowlmere, Cambridge, England. This same Daniel Scott was supposedly buried in Holme, Huntingdonshire, England on 8 Jun 1800. How far is Fowlmere (if it exists) from Holme? The issue of the two counties, Huntingdonshire and Cambridgeshire, is complicated by the fact that portions of Huntingdonshire were merged into Cambridgeshire in 1976. But the relationship between these two counties is further complicated by the fact that they are contiguous.

Fortunately, we have an almost endless supply of online, digital maps to consult. Here is a Google Maps plot showing how far Fowlmere is from Holme. 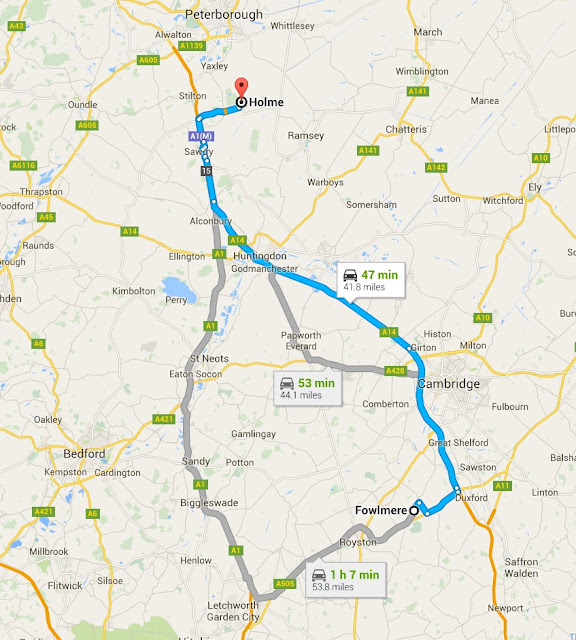 Not that far unless you realize that these people lived in the early 1700s and had to walk or depend on a horse to get anywhere. The walking time by Google Map is over 12 hours, that is two or three days depending on the person and/or the weather. My initial reaction is that if there was a Daniel Scott who was born in Huntingdonshire and who is buried in Holme, he is not the same person who was christened in Fowlmere. To make this assumption more accurately, you need to be aware of the economic status of your ancestors. In the 1841 England Census, my ancestors have been classified with the occupation of "A L" which represents agricultural laborers. These people were not likely to have traveled extended distances for births, christenings or marriages. An event recorded in the Family Tree (or anyplace else for that matter) is more likely to be an error if the places recorded are too distant from each other. But, as I have mentioned before, as we get closer to the present time, this becomes much less of an issue.

With that as an example, it is important to plot all of these locations on a map, such as Google Maps, and see how rational they are considering distances and the time it would take to ride or walk between them. Here is an example of some of them plotted on a map. 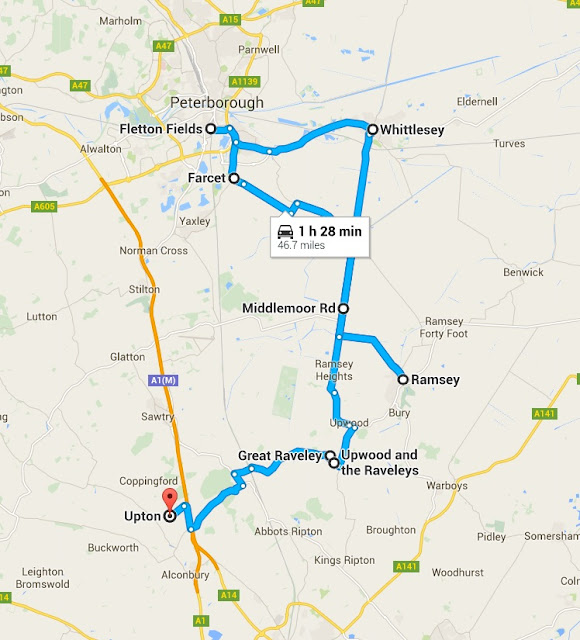 As you plot all of these places on a map, you may immediately find that some of them are not towns or other populated places. In the list above, Middlemoor is road and Glassmoor is a manor house. But the important fact here is that all of these places are relatively near each other. None of them are so far as to make it seem impossible that a person living at that time and place could have an event in their life in that place. That is why the example of Daniel Scott above is questionable. As you go back in time, the proximity of the places increases in importance. Of course, today where two people met and married can be random.

If you determine that all of these places existed, next you have to survey and find out where the records for each of the locations were likely located. In England and many other countries, this involves identifying the parishes where these people may have been born, christened, married, and buried. At this point, it is absolutely necessary to start with a definite, known location and an identified person.  So now I am back to Charles Parkinson. The key here was finding this family in the both the 1841 and 1851 England Census records.

Stay tuned for the next installment. This could take me a while since I am ordering microfilm and searching microfilm for records of this family.
Posted by James Tanner at 5:50 AM