The Question of Proof Will Not Go Away

I received an interesting comment the other day to my post entitled, "Do you ever have proof in an historical context?" The commentator made the following introductory statement:


Somehow, you seem to be ignoring the common English language definition of proof and want to redefine it. Simply put, proof is ""evidence or argument establishing or helping to establish a fact or the truth of a statement."

That is how the word is used in genealogical research and what is generally recognized by genealogists all over the world.

First, I would like to say that I must be successful in writing about proof if this comment is any indication. On the other hand, the comment does raise some interesting points. Is there a consistent way that the word "proof" is used in "genealogical research?" Further, is the meaning of the word "proof" as recognized by "genealogists all over the world" consistent with the definition supplied by the commentator?

Unfortunately, the two words, "proof and evidence," are not clearly defined by most genealogists and in fact, they are often used interchangeably. I find statements that such and such a document proves that the ancestor was born on a certain date, when the meaning of the statement is really that the document provides information from which the researcher has concluded that the event occurred on a certain date. Yes, how you characterize your personal conclusions does matter. 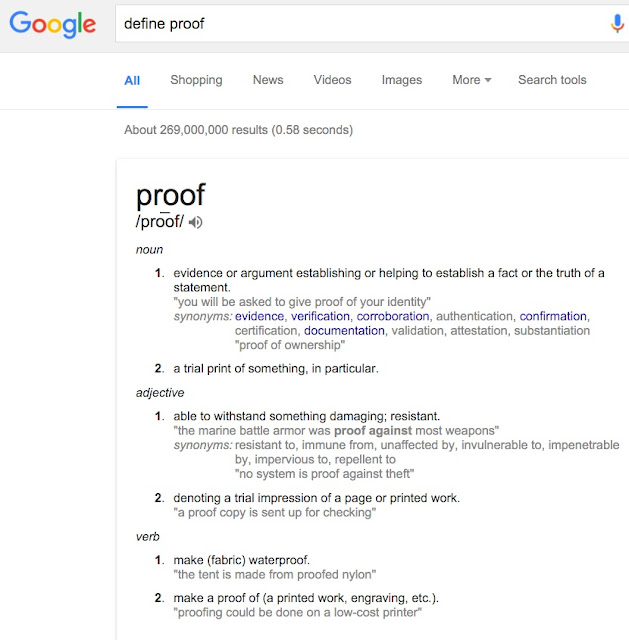 I should note that the next definition that comes up is from Mirriam-Webster:


Full Definition of proof
1a : the cogency of evidence that compels acceptance by the mind of a truth or a fact

b : the process or an instance of establishing the validity of a statement especially by derivation from other statements in accordance with principles of reasoning

Hmm. It does not seem that there is a "generally recognized" definition at all. When I search for the phrase "What is proof" in quotes, I got 818,000 results showing the term "proof" used in a huge variety of contexts. The search even comes up with a reference to one of my own previous posts.

I would suggest that were proof something that we could all agree on, we would no longer have different religions, political parties, or any other differences. What makes anyone think genealogy is any different? We all have our own opinions and beliefs. What would I need to do to "prove" to you that I was correct? Would that ever happen?

As much as we would like to believe otherwise, there are no historical absolutes. What is and has been recorded about the past will always be tentative and will always depend on finding additional documentation. Our conclusions about the past are just that; opinions and beliefs. What I find irksome in the genealogical community are those who support their personal conclusions with jargon and obfuscation and depend on formality to render their opinions as facts.

Given what I see happening every day on the FamilySearch.org Family Tree a little more skepticism about the entries would be highly beneficial to the overall accuracy of the conclusions made.
Posted by James Tanner at 9:15 AM