I just finished a long blog post on my Rejoice blog about the accuracy of family trees. One of the main points I made involves places where events were supposed to occur. Here is an example of what I am talking about. 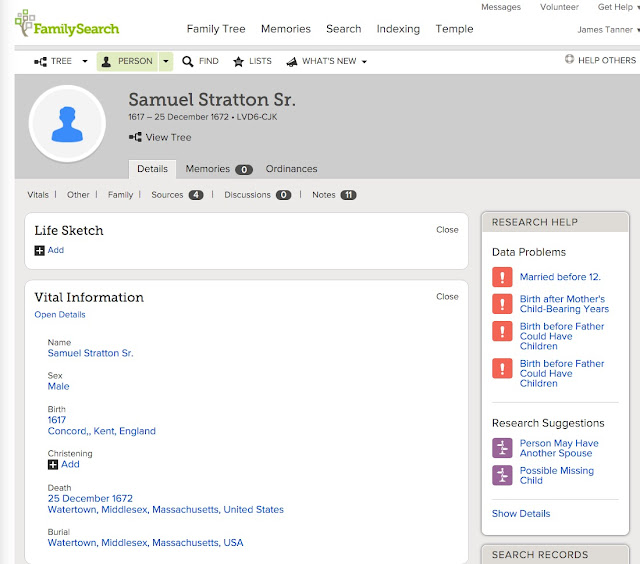 The red Data Problems look entirely at dates. Now we need to look at places with just such a critical eye. This individual is supposed to have been born in Concord, Kent, England in 1672. As I point out in my other post, there is no such place as Concord, Kent, England. Interestingly, there is a discussion on the WikiTree.com website about this very issue. Here is a screenshot of the discussion. 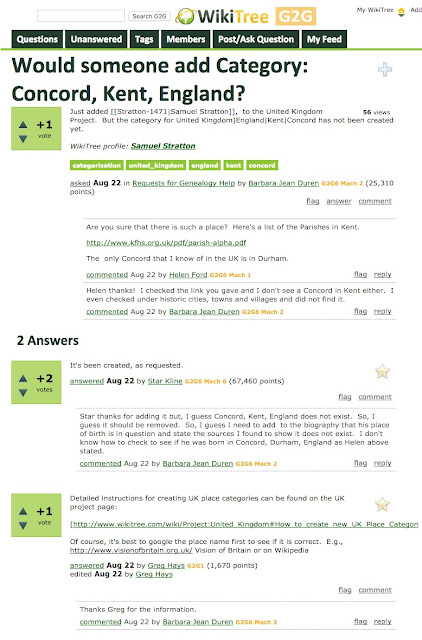 The person starting the discussion notes "Just added [[Stratton-1471|Samuel Stratton]], to the United Kingdom Project. But the category for United Kingdom|England|Kent|Concord has not been created yet." The response states:


Are you sure that there is such a place? Here's a list of the Parishes in Kent.
http://www.kfhs.org.uk/pdf/parish-alpha.pdf
The only Concord that I know of in the UK is in Durham.

Someone then created the category, but the response was as follows:


Thanks for adding it but, I guess Concord, Kent, England does not exist. So, I guess it should be removed. So, I guess I need to add to the biography that his place of birth is in question and state the sources I found to show it does not exist. I don't know how to check to see if he was born in Concord, Durham, England as above stated. (names removed)

By the way, I hope these people realized that they were posting in a public, searchable place.

OK, so why did I raise the issue of the existence of the place before I found this interchange? The answer is simple. I routinely check the accuracy of any geographic entry I find. I also check to see if the place actually existed during the time the event is supposed to have happened. This habit has set me off on searches that have lasted for years, but it also points out how errors can creep into a pedigree. The key here is the last statement, "I don't know how to check to see if he was born in Concord, Durham, England as above stated." This is key because otherwise, you or anyone who copies out a place will fall into the same trap. 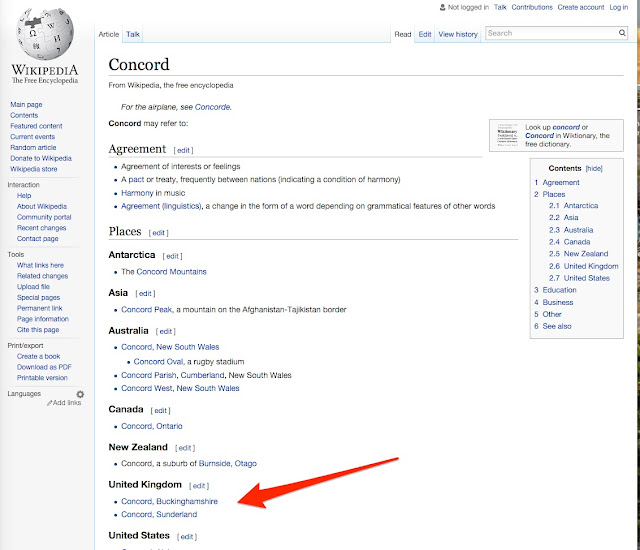 Neither of the two places found are in Kent County, England and incidentally, neither of them are in listed in Durham. But a little more searching shows that Concord, Sunderland, England was historically part of County Durham. But even here, the time period involved is crucial. We can't just go into the entry listing Concord in Kent and change it to Durham. At this point we need to assume that we have no idea where this person was born and the place needs to be removed from his entry and a note made that the previous entry listing Concord, Kent, England was erroneous. This particular entry in the FamilySearch.org Family Tree lists Samuel Stratton, Sr. as having five children. I always look to see where the children were supposed to have been born. The five children were born as follows:


Following my own advice, I find that Watertown was not established until 1630, so the birth in 1629 is probably not accurate. It looks to me that there are two sets of duplicate entries here also. There is a village in Bedfordshire called Carlton and it is about 5 miles away from Podington, but how did two of these children get born in America and two in England (I am ignoring the references to the United States in the 1600s). This looks like three trips across the Atlantic, possible but not real likely. What is most likely is that none of these entries is correct and the whole thing is a tangled mess of duplicate entries and wrongly identified family members. This is especially true when you find that Samuel Stratton, Sr.'s wife, Alice Beebe, was supposed to have been born in Great Addington, Northamptonshire, England and the marriage was in Podington, Bedfordshire, England in 1624. The son who is supposed to be my ancestor in the FamilySearch.org Family Tree is the one recorded as born in Podrington, England on 10 February 1625 and christened the same day. He is listed with three different wives. Oh, did I mention that Samuel Stratton, Sr. is listed as having five different wives but some are obvious duplicates.

So, this information is going into the WikiTree? Dates and places, separately and together, need to make sense. They need to be verified and corrected. Sources used to support the events need to come from the same places or at least refer to the places entered into a person's detail page. We have maps, gazetteers and other geographic finding aids that help us define the places that events were supposed to occur. You always need to dig deeper than simply finding a matching name.