Thoughts on increasing the probability of finding an historical record

Genealogists are generally investigating the unknown and until we actually find the information we are seeking we have no possible way to know whether or not it exists. Any possible historical record either exists or does not exist. If a record does not exist, then obviously, the probability of finding it is zero. However, even when we do "exhaustive" searching, we still do not know that the information we are seeking is not hiding somewhere in the historical records. As I have noted before, the main limitation on our search is our own patience and persistence. In my experience, most researchers give up long before all the possible historical records have been located and searched.


The Census Bureau estimates that among the 300.7 million people who live in housing units, about 94.7 percent were counted correctly, about 3.3 percent were counted erroneously, 1.6 percent provided only a census count and had their demographic characteristics imputed, or statistically inserted, and 0.4 percent needed more extensive imputation after all census follow-up efforts were attempted. Among those erroneously counted, about 84.9 percent were duplicates, while the remainder were incorrectly counted for another reason, such as people who died before Census Day (April 1, 2010), who were born after Census Day or were fictitious census records.

There is a statistical possibility that in any one U.S. Census a specific family could have been missed. The same type of analysis could be applied to any historical record. There is always the possibility that someone who should have been reported is missing. Recently, we found a parish register where all the baptism (christening) entries for the town were done on the same day and all the infants were listed with same christening date. This could have happened. The priest could have arranged to do all the christenings on one day. He could also have simply recorded them all with same date after doing them on different days.

Since historical records rely on someone responsible physically recording the information, all sorts of records can be missing. Deaths and burials may not be recorded. No one may record the birth of a child. Marriages can be performed and the minister fails to make a record. I could endlessly speculate about the possible ways information could be lost. But we need to realize that the possibility of these events all happening for every record for an individual or family is very, very small.

What about individuals who intentionally avoid making a record of their activities? This can happen because of illegal acts or for a number of other reasons. People do disappear. At any given time, we can read about missing people in the news. Some of them are never "found."

If you do any research into English parish registers, you are probably used to the fact that there is a list of "missing" dates for any given record. For example, the historical records both those digitized and those still on microfilm on FamilySearch.org have explanations about which records are mislabeled or missing. For example, see "England, Essex Parish Registers, 1503-1997 known issues."

Researchers should not be too quick to come to a conclusion that a record is missing or that an individual has chosen to disappear. As much as is possible, genealogical researchers should become aware of a wide variety of records that can provide similar information. A wide search that includes a variety of different kinds of records, can dramatically increase the probability that a missing person or information about an event can be found.

In the United States and elsewhere, land and property records are an example of persistent and complete records. If a transfer of property takes place without a deed, at some point in time that oversight will have to be rectified. Land transfers with errors or lost documents have to be reconstructed or corrected. During my legal practice, it was not unknown that we had to file a "corrective deed" to rectify some error in an original transaction. Another example of a correction is the fact that I see people who were baptized or christened in the Catholic Church when they were much older. This could happen for a number of reasons including a lack of proof of baptism due to a missing record. In searching parish records, too many times I find that researchers stopped too soon and could have found the record had they kept searching.

Recently, I was asked about how to find a missing death record. First of all, the time period in question was before civil records of deaths were being kept by the government. The FamilySearch Research Wiki contains charts for each county in the United States (most at least) showing the earliest recorded vital records in each category. Here is an example.

In this case in Arizona, birth and death records are kept by the state. So the dates show up on the state vital records page. 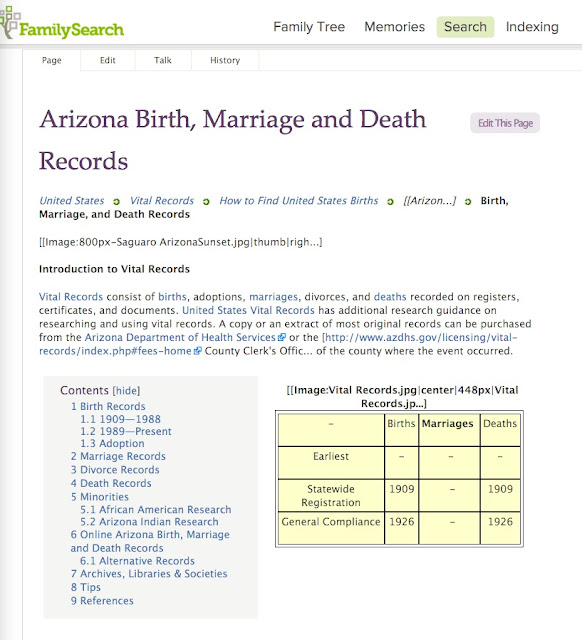 Ultimately, even if the researcher concludes that a certain record is missing, there are other avenues of research. This is true unless the time period or the place would indicate otherwise. From time to time, I am asked what can be done about finding a record in the 16th or 15th Centuries. Sometimes I have to conclude that the limit in finding any records has been reached. But for the United States, this is highly unlikely. Our history does not go back far enough to cause this type of problem. Here are two books that give extensive introductions to a variety of genealogically useful record sources. If you have not read or used these books before, I suggest you take the time to expand your understanding of what types of records can be found.

Similar books are available for other countries.
Posted by James Tanner at 7:39 AM