Who would think that this screen was a reason for celebration? This was my "test case" of an entry that could not previously be merged. The fact that I can now merge these two duplicates signals the dawn of a new age on the FamilySearch.org Family Tree.

However, no matter how important this particular change is, there are still some residual problems that cannot be yet immediately solved. Here is an example of duplicates that cannot, even now, be merged.

The reason given is "These two people cannot be merged. Both people must be in the same public or private space." I can't figure this out and will have to send in a Feedback.

This duplicate will have to be resolved by some other method. However, there were two duplicates and one of them could be merged.

The next previously blocked merge goes through without a hitch. 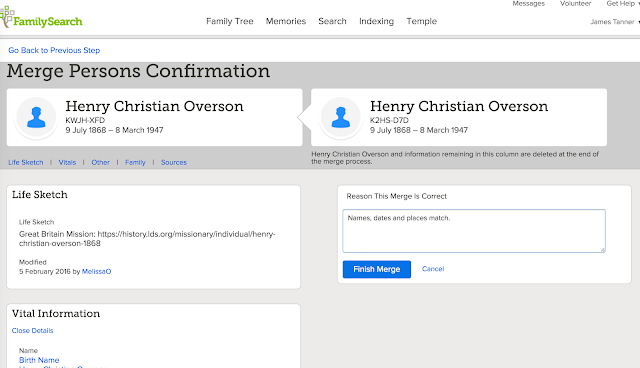 Congratulations!!! FamilySearch.org you finally did it.
Posted by James Tanner at 6:06 AM