Here is a copy of the three page will from the FamilySearch.org website. The citation for the will is as follows:

In this post I will go through this will and highlight specific passages. This particular will is from the Diocese of Canterbury in the County of Kent, England and was made on the 26th of May, 1842 by Jane Austen (not the famous writer). 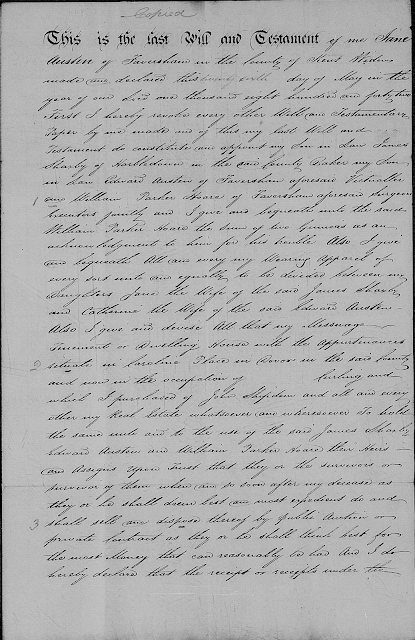 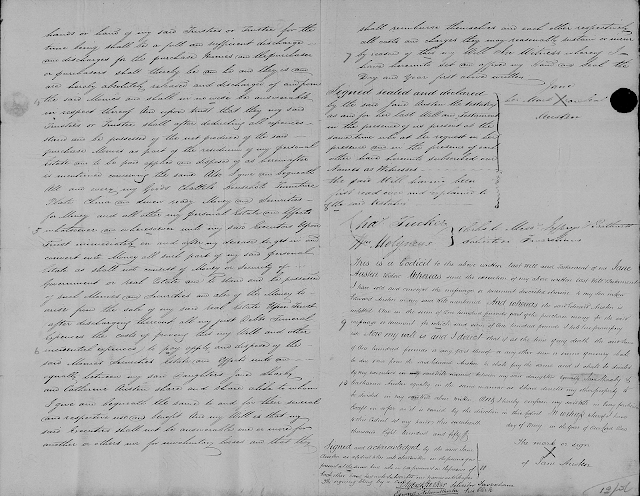 You can click on the images to increase the size or go to the original online on FamilySearch.org.

This will follows the classic will structure and the language would be familiar to any lawyer in the United States who practiced in the area of wills and probate. I will point out some of the phrases that may not be familiar to those without a strong legal background.

"made and declared"
Will language is full of formulaic statements that appear redundant. This particular phrase refers to two processes, making a will i.e. determining to have what is called "testamentary intent" or the intent to distribute property at death to particular recipients, and the physical act of putting that intent into writing.

"First, I hereby revoke every other will and testamentary paper by me made..."
This provision is directed at the real possibility that the current document is merely one in a series of similar documents made by the declarant. It is customary to try and minimize the effect of having several copies of similar documents when it is time to probate the estate. We had people who would change their will every time they had a dispute or problem with one of their heirs.

"constitute and appoint"
This is another example of seeming redundancy. The action here is naming or identifying the administrator of the will and then formally appointing that person to be the administrator. This language evolved to attempt to avoid ambiguity in the appointment of a representative of the estate.

"the said county" also "aforesaid"
The use of the word "said" seems archaic and formalistic. It is exactly that. The idea was to try and be as specific as possible especially when terms were repeated several times in same document. The word "said" means that the declarant acknowledges that the term or name has been used previously and is intentionally repeating the term.

"jointly"
The term "jointly" means that the people mentioned are to act equally in their capacity. The phrase "jointly and severally" refers to the fact that the items mentioned or duties imposed are to be shared equally among all the participants appointed or given the items or duties.

"give and bequeath"
The word bequeath means "to leave (a personal estate or one's body) to a person or other beneficiary by a will." The idea here is to clearly express intent also referred to as testamentary intent.

"give and devise"
"Give" is a general term. Devise is a specific term of art meaning to leave real estate to someone in a will. Again, this is an attempt to show specific intent.

"Appurtenances"
When used with respect to real estate, this term means all of the stuff associated with the house and property such as out buildings, lands etc. Today, we would call these things fixtures that were affixed to the property. It does not usually mean movables such as furniture. But depending on the context, the term could also apply to all of the furniture and other items contained in the house and on the property. This is where there is always a possibility of a will contest if the terms of the will are not specific enough.

"my decease"
My death.

"Trust and trustees"
In this will, the declarant states that she wants the administrators to act as trustees and dispose of her property and then distribute the funds as she directs. She is specific in this will directing the "Trustees" to sell everything and give the proceeds after paying the debts of the estate to her daughters.

"share and share alike"
Approximately the same as "jointly and severally." This phrase means that as far as possible there should be an even and equal sharing in the property, in this case, the money distributed from the sale.

"Signed, sealed and declared"
More redundancy, but necessary to express the intent of the declarant.

The witnesses to the will had to declare and sign that they witnessed the actual act of signing the will and that the person signing the will (the declarant or testator or testatrix) made the will of their own free will and choice and with testamentary intent, i.e. to dispose of their property upon death.

"Codicil"
A codicil is an amendment to the will and must be executed with same formality as the original will.

"messuage or tenement"
Messuage is an old term for house and land. She refers to the tenement because she likely does not own the land outright, but subject to some feudal claims to the estate by the crown. She apparently sold the house and land after making the original will.

I will give other examples in future posts of wills that go further back in time. If there seem to be any other terms that need explanation, please make a comment and I will address those terms in subsequent posts.
Posted by James Tanner at 7:34 AM