If you have Scandinavian ancestors and if you have been doing genealogical research for some time, you have undoubtedly become aware of the fact that all of Scandinavia used a patronymic naming system. Heritable surnames were only uniformly and universally adopted in the 21st Century. However for example in Denmark, the process of adopting fixed surnames began with the first naming act in 1526 that applied to the nobility. Several acts concerning the adoption of fixed, inheritable surnames in Denmark followed in 1771, 1856, 1904, 1961, 1981 and 2005. The later acts were directed at encouraging people to adopt a greater variety of surnames. See "Scandinavian family name etymology."

Genealogical research into Scandinavia is complicated when your ancestors adopted a completely different surname before they left Europe to come to America. Many genealogists assume the most common pattern, that the immigrant Americanized their surname upon arrival in the United States when in reality, the change may have been made before they left Scandinavia. Both my wife and I have ancestral lines in Scandinavia where our ancestors changed their name before leaving for America.

The formula used to create a patronymic surname varied with the language of the country and the particular custom associated with the changing names. There is a good summary of the changes in a Danish website called Nordic Names that includes a chart showing the possible word endings (suffixes) used in each of the countries; Denmark, Sweden, Norway, Iceland, Finland, and the Faroe Islands.

The important issue for genealogists is to realize that during the 18th and 19th Centuries, surname similarity may or may not be an indication of any relationship. In some cases, in Sweden for example, my wife's ancestor changed his name from Bengtson to Wessman. The best guess for this change was military service. The vast numbers of men with exactly the same name, became an administrative nightmare. This was not such problem in more distant times because people hardly ever moved, but with mobility came confusion and similar names became a major issue.

There is another complication of the naming patterns. Here is a quote from a genealogy blog entitled, Norwegian Ridge in an article entitled, "Understanding Norwegian Naming Patterns."


This system definitely gets confusing when you encounter names as common as Ole Olsen or Nils Hansen, so they often used their farm names to clarify their identity when conducting official business or traveling. In church records, for example, they would typically append the farm name to the patronymic name to be more precise, for example “Anders Olafsen Sandness” (or “Anders Olafsen på (from) Sandness” if Anders merely worked at Sandness). It’s very important to keep in mind that when a farm name is used, it is the farm at which they currently reside, rather than the farm at which they were born. The use of farm names is very helpful to keep in mind when looking at old records, since Norway only gradually adopted fixed surnames from the mid-1800s until they were required in 1923.

Here is one example of the patronymic name changes from one of my own family lines from Denmark.


What has happened in my own lines and what I find as an almost universal problem with Scandinavian genealogies is that lack of careful documentation down to the level of the house where the family lived, has resulted in a massive confusion of places and names. It is not enough to trace the family to a district or even a parish, it is essential that the family be traced to a specific farm or house in a town or city. It is not at all unusual to have people born with the same name on the same date who lived in families with almost identical names. Here is an example of just such a mess from the FamilySearch.org Family Tree. 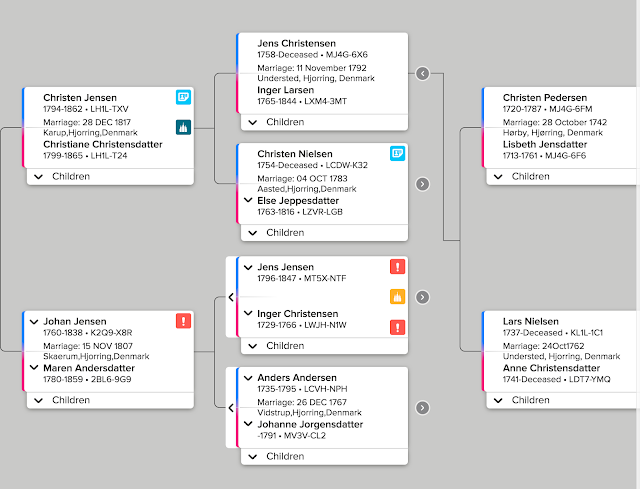 In this case, Johan Jensen is shown as born in 1760, 36 years before his "father" Jens Jensen who was supposedly born in 1796. This is just one of the many challenges I have been working through for years.