State of New York Appeals Win by Reclaim the Records 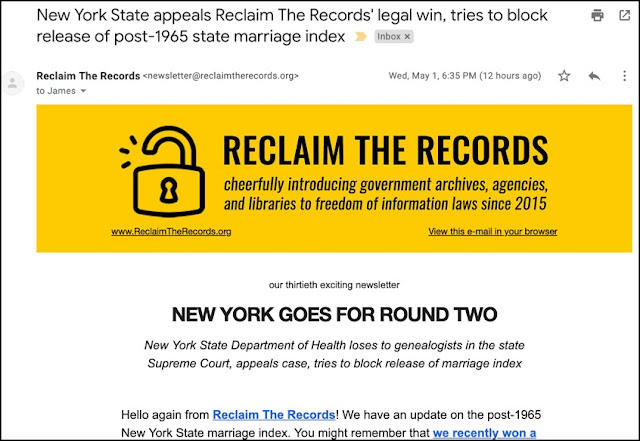 A simple explanation of what is going on is that Reclaim the Records won its lawsuit to obtain access to the post-1965 New York State marriage index and the State of New York is appealing the judgment. As a long-time trial attorney, when I see something like this happen, I can only believe that by appealing this solidly supported ruling that the State of New York is simply trying to outlast Reclaim the Records and make them spend a lot more time and money. I suspect that the State knows it will lose on appeal, but they simply want to stop Reclaim the Records from bringing any more lawsuits and so they are going to appeal every ruling and run up the attorneys' fees as high as they can. This is a very common tactic taken by government and big businesses. If I lived in New York, I would be protesting the fact that as a citizen of the State I was paying taxes so the State Government could attempt to prevent the public (me) from having access to an index of marriage records. This is a common reaction of big government to requests from the very people they are supposed to be representing and serving.

Here is what Reclaim the Records had to say:


Hello again from Reclaim The Records! We have an update on the post-1965 New York State marriage index. You might remember that we recently won a Freedom of Information lawsuit (Hepps vs. NYS DOH) in the Supreme Court of New York, our fourth lawsuit win.

We found out today that New York has filed an appeal. Today was the last possible day they could have filed, and they did. This isn't totally surprising, given that they threw everything but the kitchen sink into their initial attempt to block the release of the data, but it's still annoying.

So we're now fighting for the records again -- but we're also cross-appealing for our attorneys fees! If the state's going to push, then so are we.

More details about the appeal are on our Facebook page and all the documents and backstory relating to the original case are here on our website.

So for all of us who were hoping to finally get to use the New York State marriage index this summer to search through more recent decades of material...well, it looks like we'll have to wait a little longer. This could take a while to resolve, at least through spring of next year, maybe longer.

If New York State were to win this frivolous appeal, they would then try to justify withholding access to many more public records. By the way, this mirrors a long history of governments trying to withhold access to records. Can you believe this is happening to genealogists?
Posted by James Tanner at 6:49 AM