Don't Forget the Library of Congress 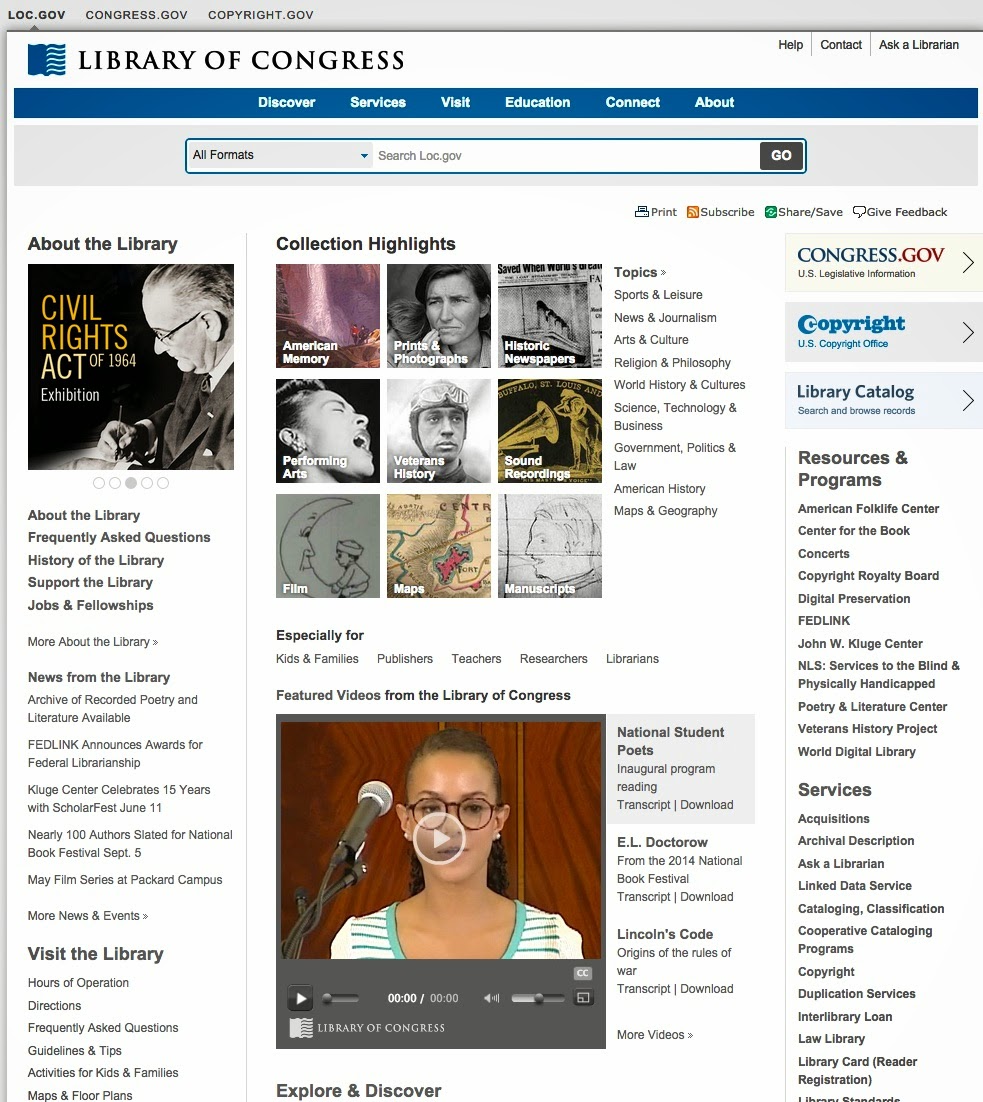 The Library of Congress is the largest library in the world. It has millions of books, recordings, photographs, maps and manuscripts. I have always viewed the Library of Congress (LOC) as the ultimate library black hole. You can spend a lot of time just browsing what is there. The good news is its size. The bad news is that the LOC, like the United States National Archives, is woefully behind the rest of the world in digitizing and making its collections available to the public. Notwithstanding this lack of digital content, what has been digitized is extensively presented on the Library's website, LOC.gov.

Part of the reason for its lack of attention to making its collections more available to the public comes from the fact that is the Library of the United States Congress. It is not a "public" library in the sense the term is generally used. As such the LOC has the task of providing confidential, objective and authoritative research and analysis to help inform the legislative debate. The LOC also oversees the United States Copyright Office.  See About the Library.

Unlike many of the genealogically valuable online resources I use frequently, the LOC is not entirely unknown to the average genealogist. If I ask a class about the LOC, there is usually a recognitive response. But if I ask how many use the LOC regularly, there is almost always no response. Why don't genealogists use the resources of the LOC more regularly? I can see several reasons. First, the LOC is mostly invisible to the average online genealogical researcher. I have never seen the LOC.gov website listed as one of the top anything websites from those who make such lists. Whereas some of the websites that frequently make such lists have only a faint shadow of the resources available. Since the LOC is not a public library, as such, it does relatively little to promote its collections.

Another reason for the LOC's lack of visibility is its almost impenetrable website. Its website is similar to many of those run by the United States government, they are so filled with information and yet so complicated that the average user cannot seem to ever find what they are seeking even if the user knows it is there. The LOC website ranks right up there with the Social Security Administration, the United States Geological Survey and the National Archives for obscure and almost useless websites.

From the standpoint of a relatively unsophisticated computer user, the LOC website is useless. Apparently, there seems to be no way to simply "look for your ancestors." Much of the website is dedicated to talking about a variety of subjects that seem to have nothing to do with finding your ancestors.

So why do I think the website is so valuable? Because I use it constantly and because despite all of the appearances I listed above, it has valuable and pertinent information. Here are some of the resources I use most frequently and by the way, if you think the only way to genealogical research is to search for your ancestors' names in some genealogical index, you are woefully in need of some major attitude changes and education. Just to be blunt.

Here I go with the resources:


Chronicling America is a Website providing access to information about historic newspapers and select digitized newspaper pages, and is produced by the National Digital Newspaper Program (NDNP). NDNP, a partnership between the National Endowment for the Humanities (NEH) and the Library of Congress (LC), is a long-term effort to develop an Internet-based, searchable database of U.S. newspapers with descriptive information and select digitization of historic pages. Supported by NEH, this rich digital resource will be developed and permanently maintained at the Library of Congress. An NEH award program will fund the contribution of content from, eventually, all U.S. states and territories.

The Chronicling America section of the LOC currently has over 9 million pages of free, fully digitized and fully searchable newspaper pages as well as the comprehensive list of the location and holding of nearly all of the newspapers published in America since 1690. The LOC has also began putting it holding on Flckr.

Here is the LOC's description of their map collection. You might note that it reinforces what I have previously noted about the digital condition of their collections.


The Library of Congress has custody of the largest and most comprehensive cartographic collection in the world with collections numbering over 5.5 million maps, 80,000 atlases, 6,000 reference works, over 500 globes and globe gores, 3,000 raised relief models, and a large number of cartographic materials in other formats, including over 19,000 cds/dvds. The online map collections represents only a small fraction that have been converted to digital form.

Notwithstanding the disclaimer, the LOC does have thousands of digitized maps online.

Genealogists should be just as interested in preserving what we do have as they are in searching those same records. The LOC is a basic reference source for information about all types of preservation, including digital preservation. The LOC website is the go-to place to find out about current preservation standards and methods. In a rare departure from their overall attitude towards the unsophisticated user, they even address the issue of Family Treasures.

From what I have been saying, you may get the impression that the LOC does not have digital collections. That is not exactly true. What I am saying is the only a very small percentage of their overall collections are digitized and made available online. However, what is available is very extensive and includes, historic sound recordings, prints and photographs and website archiving.

I think this part of the website, as well as other parts, illustrates why genealogists are not generally aware of what is available or even try to find out. This appears to be general items of historic interest. For some reason, unfathomable to me, genealogists seem oblivious to the fact that what they are doing is historical research. My experience is that the average genealogist has only about as much awareness of history as the general population of the United States which is woefully low.

Here is the description of this section of the LOC.


The American Folklife Center's Archive was originally founded as the Archive of American Folk Song at the Library in 1928. In 1978 it became part of the American Folklife Center and was subsequently renamed the Archive of Folk Culture. Today the Archive includes over three million photographs, manuscripts, audio recordings, and moving images. It consists of documentation of traditional culture from all around the world including the earliest field recordings made in the 1890s on wax cylinder through recordings made using digital technology. It is America's first national archive of traditional life, and one of the oldest and largest of such repositories in the world. To read more about the history of the Archive read"The Archive of Folk Culture at 75: A National Project with Many Workers,"[PDF, 1.52MB], by James Hardin.

Surprisingly, some of this is digitized and online.


As one of the leading genealogical collections in the country, the Library has more than 50,000 genealogies and 100,000 local histories. The collections are especially strong in North American, British Isles, and German sources. These international strengths are further supported and enriched by the Library's incomparable royalty, nobility, and heraldry collection, making it one of a few libraries in America that offer such collections.

Despite its limitations, the LOC is a very, very valuable genealogical resource.