Is there a better way to document complex familial relationships?

I recently got into an exchange with genealogist David McLean. David wrote to me outlining some of his ideas on the need to simplify the concept of relationships usually expressed by this Table of Consanguinity shown above. Personally, I cannot remember a time when I did not understand the idea of cousins once or twice removed. But as I got into teaching genealogy, rather than just doing it, I quickly learned that most people (nearly all?) were mystified by the concept.

It is important to understand that this structure is entirely Western European based. The terms used to designate relationships, which may appear to some to be "self-evident" are culturally determined and vary considerably throughout the world. We also get into the illusion of cultural superiority when we think that there is one "right" way of defining a world view. I guess occasionally, we run into a world view that differs from our own and we have wars and strife over the differences. My own ancestral history has some twists and turns that are not well accepted by the mainstream of our European-based culture, at least in the United States.

Although even in the mainstream of life in the United States today, issues such as polygamy seem rather "well settled," we actually live in a highly complex relationship structure that doesn't fit well into this Table of Consanguinity. For example, what relationship do I have to my brother's former wife? Since she is no longer an "in law" because there is no legal relationship between her and her former husband, what do I call her? Does the divorce affect my relationship with my nieces and nephews? What do I call the second wife of my uncle? Are her children, not the children of my uncle, my cousins? Are the children of my Great-grandfather's second wife, the one I am not related to by blood, my cousins? How do I explain that one cousin and I share the same Great-grandfather and Great-grandmother, but another cousin shares only my Great-grandfather?

Even though we would like to believe that the straight-forward chart above "explains it all," in fact, it is merely an artificial construct that works only within a very narrow and confined context that does not easily make allowances for the great variety of relationships that actually exist in our society. In addition, the chart fails to tell us anything about the real relationships, meaning the socially initiated relationships that exist and are the basis of the practical realities of our lives. For example, I may have almost no contact with or involvement with various family members who are "close" relations and yet have a very close relationship with other family members who are not a closely related.

Genealogy has a distinct tendency to paint family relationships, at least in the United States, with a broad, ill-defined brush. As I have written many times in the past, our genealogy programs do a poor job of preserving and documenting these "outside of the box" relationships.

Is there a way to cut through this haze of relationships and develop a common terminology? Maybe. I do think that the concerns expressed by David McLean and others are legitimate. But linguistically, I doubt that any contrived set of terms or relationships imposed by genealogists on their databases will have much of an effect on the overall concept of relationship in our country or in any other county.

The main thrust of the concerns expressed by David McLean were directed at the results of hearing things such as "a 15th cousin, three generations removed. There is a program, currently popular among some interested in genealogy, called Relative Finder from Brigham Young University (BYU). Here is a screenshot of the startup page. 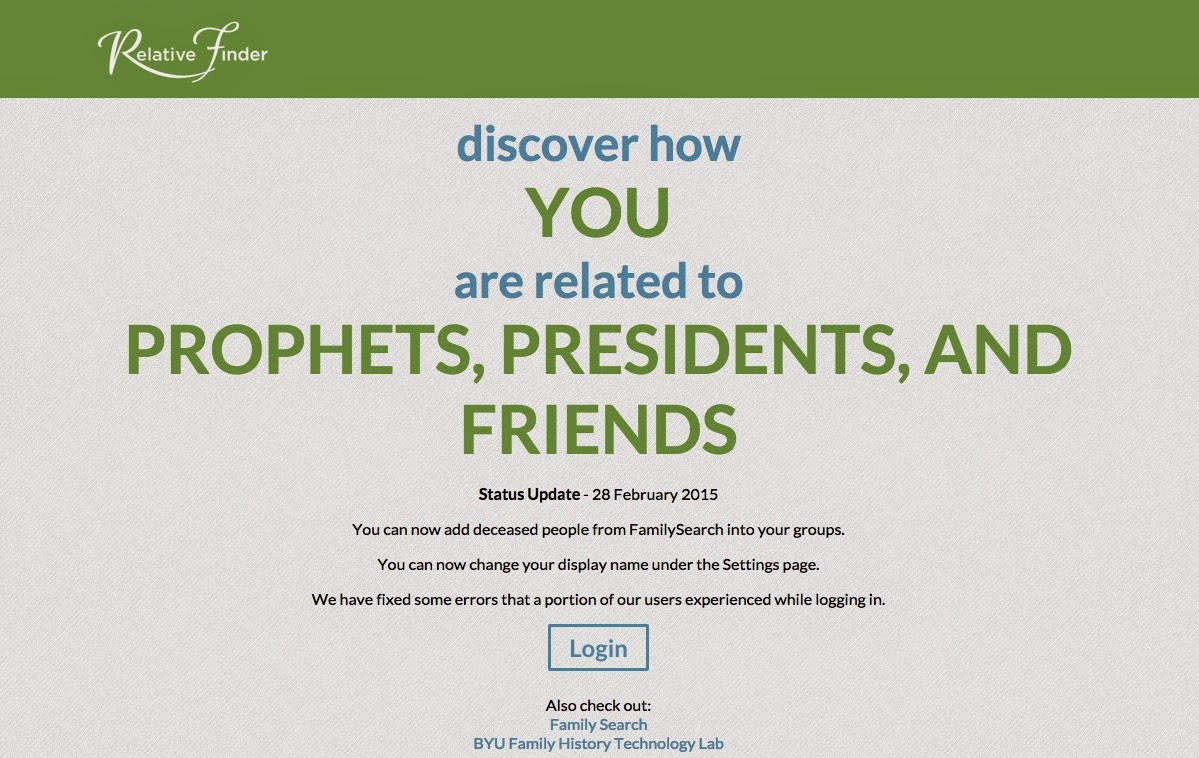 In addition, there are many other programs that purport to reveal how you are related to various famous people, both current celebrities and historic figures. All of these programs have the fatal flaw of assuming that the database used to calculate these extreme relationships are at all accurate. For example, the current local fad to use Relative Finder to establish distant relationships using the FamilySearch.org Family Tree ignores the fact that those relationships are far from settled, documented or even presumably accurate. These facts are ignored with the excuse that these types of programs are a way to get people involved with genealogy. Personally, I am not sure how my interest in genealogy was increased when I disproved a family story that I was related to Daniel Boone, but that is discussion for another post.

That said, I think David has some interesting and very helpful ideas and I certainly agree that David's explanation is a great help in understanding the sometimes impenetrable jargon!  In the context of programs such as Relative Finder, David's concept are extremely useful. He says,

This is especially useful in visualizing relationships from the BYU Relative finder. Say one of my friends is my “12th Cousin 3 Generations Removed”. This means that her 12th grandparent is my 15th grandparents (she has 14 hops to get to the common ancestor. I have 17 hops to the same common ancestor). This just means nothing more than that her ancestors, on average, were just a bit younger than my ancestors when my direct line ancestor was born (I have more hops). There no more mystery!

He goes on to criticize the use of the term "great," when applied to grandparents. Here is what he suggests:


The complexity all comes from our habit in the English language (and many other western languages) of inserting a "great-" before a grandfather, thus making the cousin relationships have an "off by one" problem. It?s hard to remember that if we share a 2nd great-grandfather, we are third cousins. Just don't use the great, he is your 3rd generation grandfather, and we are 3rd cousins. Everyone immediately understands and relationships are so much easier to visualize.

This is something I have been doing for years. I refer to my extended grandparents as my "3rd great-grandfather," but David takes this a step further and takes out the "great." Good suggestion. He goes on to talk about "removed" relationships:

This is certainly an interesting way of explaining a complex system. Thanks to David McLean for the example and suggestion for yet another blog post.
Posted by James Tanner at 12:09 PM