The availability of some types of genealogical records, by itself, often dictates where an ancestral investigation begins. Most casual or undirected research focuses on names and dates in the United States Federal Census and other sources that are highly promoted by the online repositories. The problem is that the investigation frequently ends where it begins, with a cursory examination of popular and readily available sources and no real concept of what to do next. From my standpoint, this occurs, in part, because the standard pedigree chart and the common default view of the online family trees emphasize individuals at the expense of family units.

I had this highlighted to me yesterday when I was helping a patron in the Brigham Young University Family History Library. The patron was looking at the default Detail View of one of his ancestors and asked me why the program had added in a random unrelated family. Here is what he was looking at. (I don't have his family, but the idea is the same with any family shown) 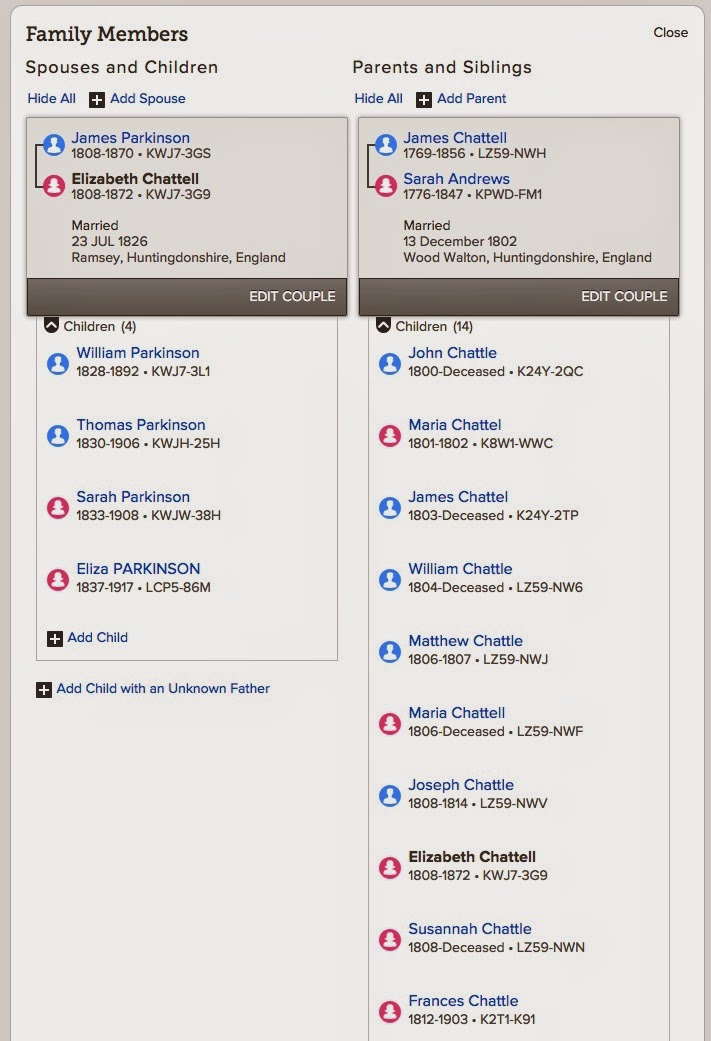 In this view, this is the wife's detail page. James Parkinson is married to Elizabeth Chattell, shown in the left column and Elizabeth's parents are shown on the right. Elizabeth appears as a child in her parents' family with her name bolded.

After looking at this type of entry or similar ones from dozens of other programs, the relationships here seem obvious. However, the patron could not figure out why the second, to him, unrelated family on the right had suddenly appeared. He did not see the surname connection between the wife on the left and her father on the right and further, missed that the wife was listed as a child. It actually took me several minutes of explanation before he got the idea of what was being shown.

This incident was not unique. It occurs frequently as people view our "standard" forms for representing families. I see the same issues with even more frequency when I try to explain the relationships in FamilySearch.org's Descendancy View.

In thinking about this type of situation, I believe that it comes from emphasis on the individual. We look for names and forget family relationships. In fact, the view shown above does more than that. It obscures interfamily relationships and their relationship to additional generations. Genealogy is not a process of filling in so many blanks in a form.

If you have ever watched a young child try to do a jigsaw puzzle, you will see what I mean. Until the child reaches a certain point in their development, they will pick up random pieces from the pile and try to fit them into any available space in the puzzle. In other words, they do not grasp the overall picture of the puzzle and the fail to see the relationship between adding the pieces and completing the picture. This is exactly the problem experienced by the patron yesterday. He failed to see the pictured formed by the members of the families shown and was trying to fit in random pieces.

This happens all too frequently with online family trees. Yesterday, I also found one of my direct line ancestors on the FamilySearch.org Family Tree had acquired three new children. This turned out to be exactly the same issue of finding pieces and trying to fit them in without looking at the whole picture. In this case, the three children came from a family with a father who had a name similar to my ancestor and a wife with the same name as my ancestor's wife. Coincidently, both the husband and wife were born in the same places as my ancestors. But the source records and the entries showed that my ancestors had married in Utah and their first child was born in St. George, Washington, Utah. There was a U.S. Census Record for 1880 showing the new family with a one year old baby in St. George. Notwithstanding this record, the children were added to the family showing their birth places in Massachusetts from another 1880 U.S. Census record where the one year old baby did not appear. It took me a few minutes to figure out what was going on, but I soon deleted the relationship of the three extra Massachusetts children.

This incident is repeated over and over again in the Family Tree and other programs. It would be easy to become overly frustrated with this jungle of poor choices out there, but the causes of this type of seemingly random behavior is inherent in the structure of the programs and forms we use for recording genealogical information. There is nothing in the Family Tree program, or any other program that I am aware of, that would point out the discrepancy between a young family in St. George, Utah and adding three children born in Massachusetts in the 1880s, at a time when traveling between St. George and anywhere in Massachusetts could take an extraordinary effort. At the time, the only way to get across the 300 miles from St. George to Salt Lake City, Utah and a connection to the railroad was by horse or ox-drawn wagon.

But even brushing aside historic transportation issues, the real failure here is looking at names, dates and places without considering the consequences to the family. I only have to go back two more generation on this same Parkinson line to see blatant examples of this problem of focusing on individuals and forgetting the family. Here is another example. 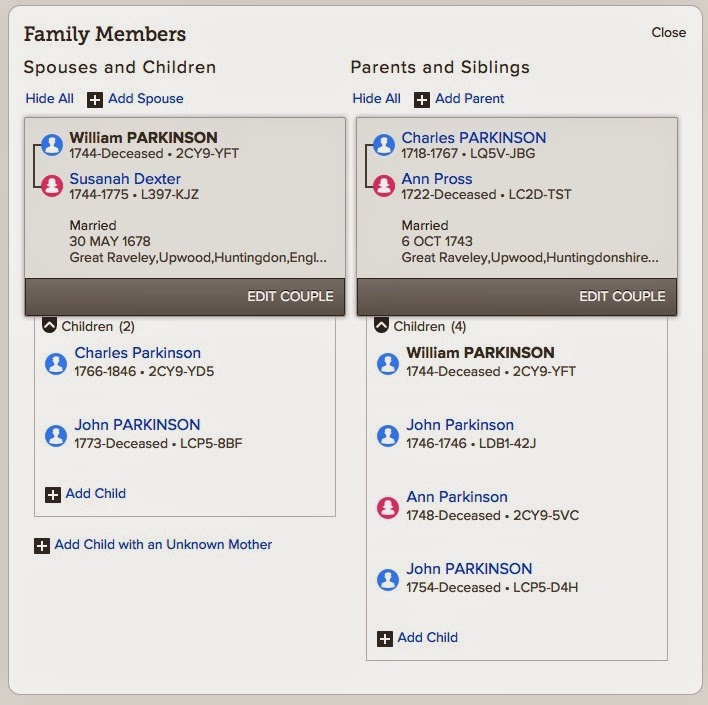 Apparently so far, no one has look at this "family." They have focused on putting the pieces without seeing the picture at all. Do you see what I am talking about? Maybe the marriage date is a typographical error, but the fact that it has been entered and no correction made is an indication of this common malady of looking at the whole picture with the level of a young child doing a jigsaw puzzle.

As the tools for analyzing the Family Tree have become more sophisticated, this type of problem is being demonstrated with more frequency. In this case the date is a typo and it took me only few seconds to correct. Now are we acting like children trying to force the wrong piece into the puzzle?
Posted by James Tanner at 7:01 AM