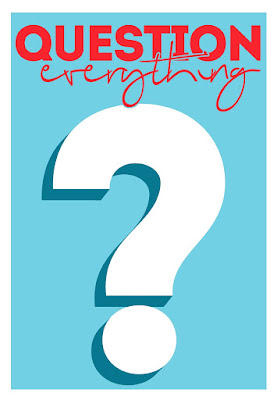 I was surprised in reading a recent article in The Costco Connection about preserving personal records to find that many of the ideas suggested were not only inaccurate and contrary to accepted archival practices but misleading and wrong. One of the disappointing things about the article entitled, "Putting a lifetime of photos and more on a DVD Preserving Memories, was that a sidebar had links to both the U.S. National Archives and the Library of Congress websites with current, accurate information that contradicted the article. Apparently, neither author nor the editorial staff of The Costco Connection took the time to investigate the recommended best practices. 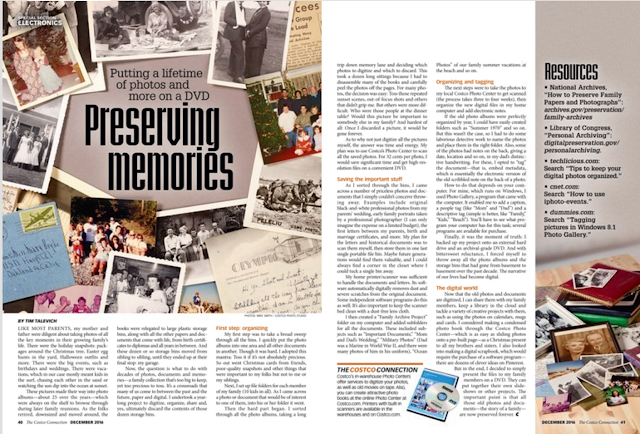 The author of the article starts out by telling about a fairly common situation where valuable family photos and documents are neglected by family members for an extended period of time and finally end up in the author's garage. I have actually rescued valuable family documents stored in garages.

From our perspective, over the years, my wife, my daughters and I have rescued a huge number of genealogically valuable records and have put thousands of them online or in libraries and archives where they will be permanently preserved. The ideas expressed in this article are very, very sad because ultimately the valuable genealogical information is destroyed or almost surely lost to the family. People following the suggested practices outlined in the article will almost certainly end up destroying valuable records and photos and losing their genealogical heritage. From a genealogical perspective, the article is a travesty.

Here is the first of many absolutely poor practices advocated:

My first step was to take a broad sweep through all the bins. I quickly put the photo albums into one area and all other documents in another. Though it was hard, I adopted this mantra: Toss it if it's not absolutely precious. So out went Christmas cards from friends, poor-quality snapshots and other things that were important to my folks but not to me or my siblings.

The author is taking it upon himself to decided what is important and what is not. He does not indicate any particular interest or knowledge about his family and certainly does not seem to care about what his parents thought was important. Granted, there are some things that have little or no historical or genealogical value, but one man's trash is another man's treasure. In this case, his lack of sensitivity and lack of investigation are outrageous. If there is any doubt at all about the value of preserved records then digitize everything. But paramount and above all, preserve what you find. A seemingly unimportant news article or holiday card may be the key to identifying a lost ancestor.

Here is the next bad practice.


Then the hard part began. I sorted through all the photo albums, taking a long trip down memory lane and deciding which photos to digitize and which to discard. This took a dozen long sittings because I had to disassemble many of the books and carefully peel the photos off the pages.

Not only has the author destroyed the arrangement and context of the photos, he has probably damaged many of them by improperly removing them from the albums. My practice is always to image the entire page from an album and then also scan the individual photos in place with any notations made.


For many photos, the decision was easy: Toss those repeated sunset scenes, out-of-focus shots and others that didn't grip me. But others were more difficult. Who were those people at the dinner table? Would this picture be important to somebody else in my family? And hardest of all: Once I discarded a picture, it would be gone forever.

Just because you don't happen to recognize your own ancestors is no criteria for "throwing out the photos." I shudder to think about the continued loss of valuable artifacts and documents this article might inspire. There is nothing in the article suggesting that the author or others take some time to identify the people in the photos before tossing them out.

The author then says it is not worth his time to digitize the photos so he is going to pay Costco to do the job for 32 cents a scan. If I were being paid 32 cents a scan, I would have been paid more than $100,000 or so for my scanning efforts plus what I have paid my grandchildren to scan documents.

The author finally begins scanning a few of the selected items himself. But then he decides to put the entire project into a standard photo utility from Microsoft called "Photo Gallery." He does not discuss either the resolution of his scans or the format of the files, all important issues for preservation. But the biggest problem is thinking that any one program will solve the preservation issue. How long will Photo Gallery be supported by Microsoft? How many of these types of programs have been abandoned and the file formats no longer supported? This is a major preservation issue. You cannot just scan and forget. You have to continue to migrate your files to new formats as time passes. Migration is a fundamental issue with digital preservation and ignored completely by this article.

The final comment from the article is extremely sad. Here it is:


But in the end, I decided to simply present the files to my family members on a DVD. They can put together their own slide-shows or other projects. The important point is that all those old photos and documents—the story of a family—are now preserved forever.

Almost none of the newly manufactured computers contain DVD drives. A so-called "archival quality DVD" depends on the availability of a drive that will be able to read the content and in this case also a program that will recognize what is on the disk. How long will you be able to read a DVD disk?

These comments are intended to point out that many of the most common practices are destructive to actually preserving our family's memories. As the author and Costco fail to point out, their suggestions are not supported by the Library of Congress. Even a casual review of this entire section of the Library of Congress website will graphically point out the errors in the Costco article.


Recordable optical discs can be convenient media for access and temporary storage. Recordable disc formats include CD-R, CD-RW, DVD-R, DVD-RW, DVD+R, and DVD+RW. Unfortunately, these media are machine-dependent, and continued access to the digital content is contingent on the availability of compatible hardware and software. Additionally, these media are subject to deterioration just like any other material.