Whatever happened to the Mesa FamilySearch Library? 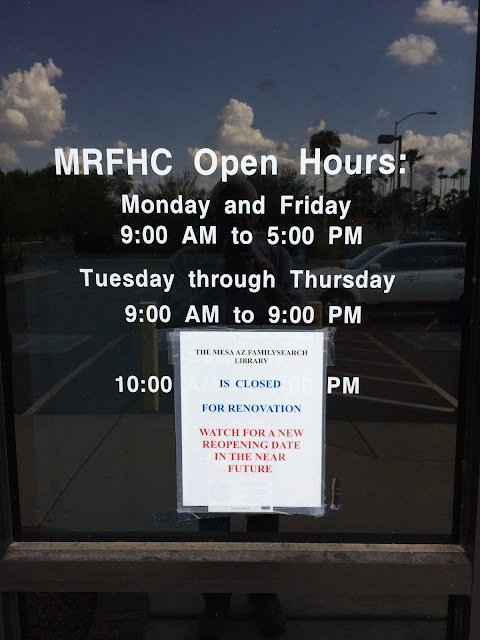 Preliminary note: The opinions expressed in this post are my own and not those of any other entity or organization including The Church of Jesus Christ of Latter-day Saints.

It has now been two years since the Mesa FamilySearch Library closed for renovations. Apparently, the renovations were to take about a month or so, but problems with the building housing the Library stopped the entire operation. Now two years later, the Library is operating out of the old building the corner of 1st Avenue and LeSueur, 464 E. 1st Avenue, Mesa, Arizona.  For some reason, the website for the Library is down at the time of this post.  I served as a volunteer missionary at the Mesa FamilySearch Library for about ten years.

During the time of its operation out of the newer building at 41 South Hobson in Mesa, there were about 150 missionaries serving and helping more than 35,000 patrons a year. At the time it closed, the Library had the following resources:

Over the last two years, I have inquired several times as to the possible disposition of the facility and the future of the Library without any firm response. Meanwhile, FamilySearch has proceeded with several other large Family History Center and Family Discovery Center projects.

As I have recently written, many of the existing Family History Centers are losing the attraction of their basic resources due to the ongoing digitization projects being finalized in the not-to-distant future by FamilySearch. The majority of the books in the Mesa FamilySearch Library have already been digitized and added to the FamilySearch.org website. Currently, the FamilySearch.org Books collection has 321,206 digitized volumes. With the conclusion of the digitization of the microfilm collection in the Salt Lake Family History Library in the next few years, the main reasons for doing research in a facility like the Mesa FamilySearch Library will end. Most of the reasons for visiting a library or center such as the one in Mesa were based on the research resources available. Here in the United States, for example, most of the people in the country now have access to online computers at home. A Pew Institute Study entitled, "Americans' Internet Access: 2000-2015" indicates that in 2015, 84% of the adults in the United States had internet access.

However, one component of some of the Family History Centers, including Mesa, is the ability to provide excellent training and support to patrons. If the type of center in Mesa is going to continue to operate in the future, these centers will have to become primarily teaching, training, and support facilities. It may well be that this almost certain future of the existing Family History Centers dominates the reasoning behind virtually closing down much of the Mesa facility's operation. If that is the case, then many of the Family History Centers in the United States will probably suffer the same fate as the one in Mesa, particularly those