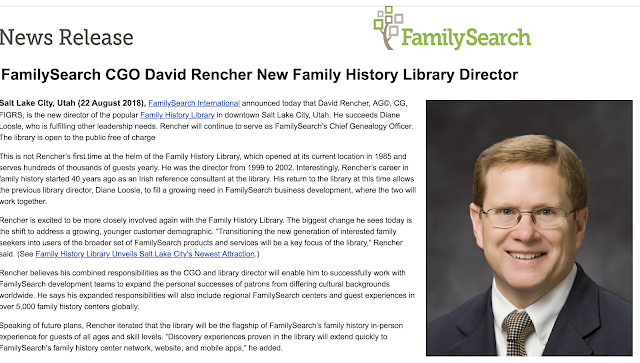 On August 22, 2018, FamilySearch International announced that David Rencher, the current Chief Genealogy Officer of FamilySearch will also serve as the new director of the Family History Library. Here is part of the announcement:

This is not Rencher’s first time at the helm of the Family History Library, which opened at its current location in 1985 and serves hundreds of thousands of guests yearly. He was the director from 1999 to 2002. Interestingly, Rencher’s career in family history started 40 years ago as an Irish reference consultant at the library. His return to the library at this time allows the previous library director, Diane Loosle, to fill a growing need in FamilySearch business development, where the two will work together.

I look forward to being able to visit the Family History Library again when we return to Utah.