Lessons in Genealogy from 1915 Part Two 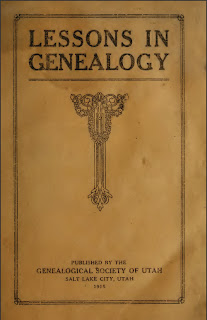 At the time the Lessons in Genealogy book was written the big event of the year was the International Congress of Genealogy held in July, 1915 in conjunction with the San Francisco World's Fair. The Utah delegation made up nearly half of the delegates to the Congress. The proceedings of the Congress are digitized online on Archive.org. 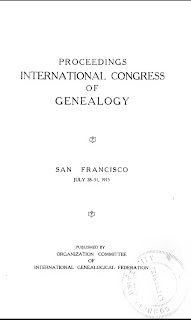 The first American work on genealogy was published in 1771. The second in 1787. The third in 1813. In 1874 a total of 400 genealogical works was listed. From that time to the present this class of publications has greatly increased. Every year sees a large number added to the list. The New England society has been instrumental in having printed 137 volumes of vital records of towns in the state of Massachusetts, and this good work is still going on. Other American societies are actively gathering, preserving, and publishing genealogical matter. Thousands of individuals have been moved upon to spend much money and years of time to gather \ their family records and issue them in printed form.

There is no question that record availability is a major factor in the changes since 1915. For example, the Newberry Library now has over 17,000 published genealogies and extensive collections of local histories, census records, military records, and periodicals. The collection in the Library of Congress has grown enormously with has more than 50,000 genealogies and 100,000 local histories. The collections are especially strong in North American, British Isles, and German sources.

In 1915, the UGS, the past predecessor of FamilySearch had a library of 3,000 volumes. Today the Family History Library, in its modern building in Salt Lake City, Utah, is the home of a collection that includes over 2.4 million rolls of microfilmed genealogical records; 727,000 microfiche; 356,000 books, serials, and other formats; over 4,500 periodicals and 3,725 electronic resources.

When was the last time you used the resources of the Family History Library? The point is simple. Record availability will not affect the way you do genealogy if you do not use the records.

More about the Lessons in Genealogy from 1915 in future posts.