Many genealogists would think they had died and gone to heaven if they found an entire book about their ancestors. It is true that some of my earliest memories of "family history" came from various books my father had accumulated over the years, but as I have done more and more research about my family, I have discovered that surname books are a mixed blessing at best and misleading at worst.

One recent experience with an ancestor book came from the venerable Tanner family book cited as:

The copy of the book I have is a revised edition cited as:

These books are helpful in giving an overview of the family and supplying dates and places not otherwise easily available. Unfortunately, few of this type of book were written when the academic standards included adding source citations for the information contained in the book. Often, however, the author was personally acquainted with some or all of the older people in the book. The Tanner book is 698 pages long and includes a reference to my own father and his family.

The detail of the information given lends credence to the contents, but the lack of source citations is frustrating when even a minimal amount of research begins to reveal discrepancies and inconsistencies in the narrative. As with many surname books focusing on the descendants of a certain ancestor, the Tanner book has only a very brief reference to the ancestor's progenitors.

I recently focused on John Tanner's father, Joshua Tanner (b. 27 July 1757, d. 12 September 1807). These dates have been copied by literally thousands of family trees on the Web without questioning the authenticity for years. I have verified the birth place of Joshua Tanner in Hopkinton, Washington, Rhode Island but his death and burial are more problematical. The 1923 edition of the Tanner book is available online. Here is the excerpt of the book on page 9 referring to Joshua Tanner:

From this short account, you would be led to believe that Joshua Tanner died in or near "Reed's Corners, located in Washington County, New York with an exact date of death. As I previously noted, there are no sources cited for this information. Nearly all of the online family trees I have examined have copied this information without question. So when and where did Joshua Tanner die?

He does appear in the 1800 U.S. Census living in Argyle, Washington, New York. Here is a copy of the U.S. Census record:

Is there a "Reed's Corners" in Washington County near to Argyle? Apparently, none of the thousands of descendants of Joshua Tanner have questioned the Tanner Books authority on this subject. This seems to be the common theme among the vast majority of family tree gatherers; snatch the information from a book without question.

Here is a screenshot of Argyle, Washington, New York from Google Maps: 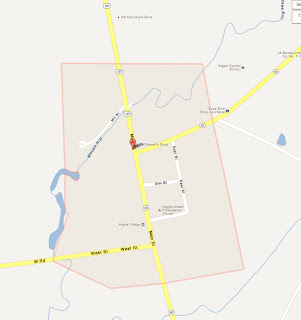 As you can see, the place isn't very large. Here is the historical description of the town from Wikipedia:

The town was formed from the Argyll Patent of 1764 while still in Albany County, Province of New York and became a town in Charlotte County when it was created March 24, 1772. Following the American Revolution, in 1784 the State of New York renamed Charlotte County as Washington County. Since many of the original settlers were from Argyll, Scotland, they adopted the name of their native land to the town. Although population growth was slow, the town was the most populous in the county by 1790.

In 1803, part of the town was used to establish the new Town of Greenwich.

There is a further reference to the Alpheus Barber Farm in the Washington County, New York NyGenWeb. Here is the entry:

However, I find no reference to Josua Tanner's death or burial. In fact, the Geographic Names Information System of the United States Geographic Survey shows eight places in the U.S. with the name Reed's Corners and none of them are in Washington County, New York. Here is a screenshot of a search:

You will have to click on the image to see the detail. So what are we to conclude? How useful is the entry in the Tanner book? It would be helpful if we had a burial location for Joshua Tanner, but I have yet to find that information.

If you are fortunate enough to find and use a surname book, a word to the wise, use the information with discretion.
Posted by James Tanner at 9:14 AM