My background is partially in anthropology and linguistics. As a results of my previous training, I am aware that there are multiple methods for illustrating family or kinship relationships that seldom crossover into the world of genealogy. Most of these systems were developed by anthropologists working with non-European and very non-traditional family structures from the standpoint of mainstream genealogy programs. Even if the programs have a provision to record multiple marriages, much of the genealogically pertinent information is obscured. There are a very few programs, such as Heredis.com, that graphically show all possible family relationships. This feature in the Heredis program is called the "Extended Family View" and is described as follows:


This new and more comprehensive view of your family shows its composition as a whole: siblings, remarriage, stepchildren, step-brothers and step-sisters, children from other unions of the different spouses… noting or not when they belong to the direct lineage. All the people with whom they lived, all those who they knew are in the extended family. A practical tool for analyzing re-marriages in the family.

It is this one sentence "All the people with whom they lived, all those who they knew are in the extended family" that opens the door to relationships that are usually reserved to kinship charts. But due to the traditional genealogical focus on the Western European family structure and the use of standardized family group records and pedigree charts, many, if not most, genealogists fail to include significant familial relationships in their research. I have written about this issue several times in the past, but it is a recurring issue.

Let me give an example of what I am thinking about lately. Let's suppose that a standard family is shown on a pedigree chart. The chart may be biologically accurate or even modified to show adopted family lines, but it fails to show the "real" relationships between the family members. This issue can be as simple as the fact that the family members lived in different parts of the country or even in different countries to the fact that family feuds have splintered the family into factions where there has been little or no communication between certain family members for years. In these cases, relationships with cousins or friends may be much more important to a family than the strictly biological relationships shown on a pedigree and if a genealogist is looking for information about a particular ancestor, failure to take these facts into account can result in failure to find valuable, genealogically pertinent information.

There is no completely acceptable definition of "kinship." It is usually used to refer to the overall pattern of social relationships. Here is an example of a kinship chart using standard anthropological symbols: 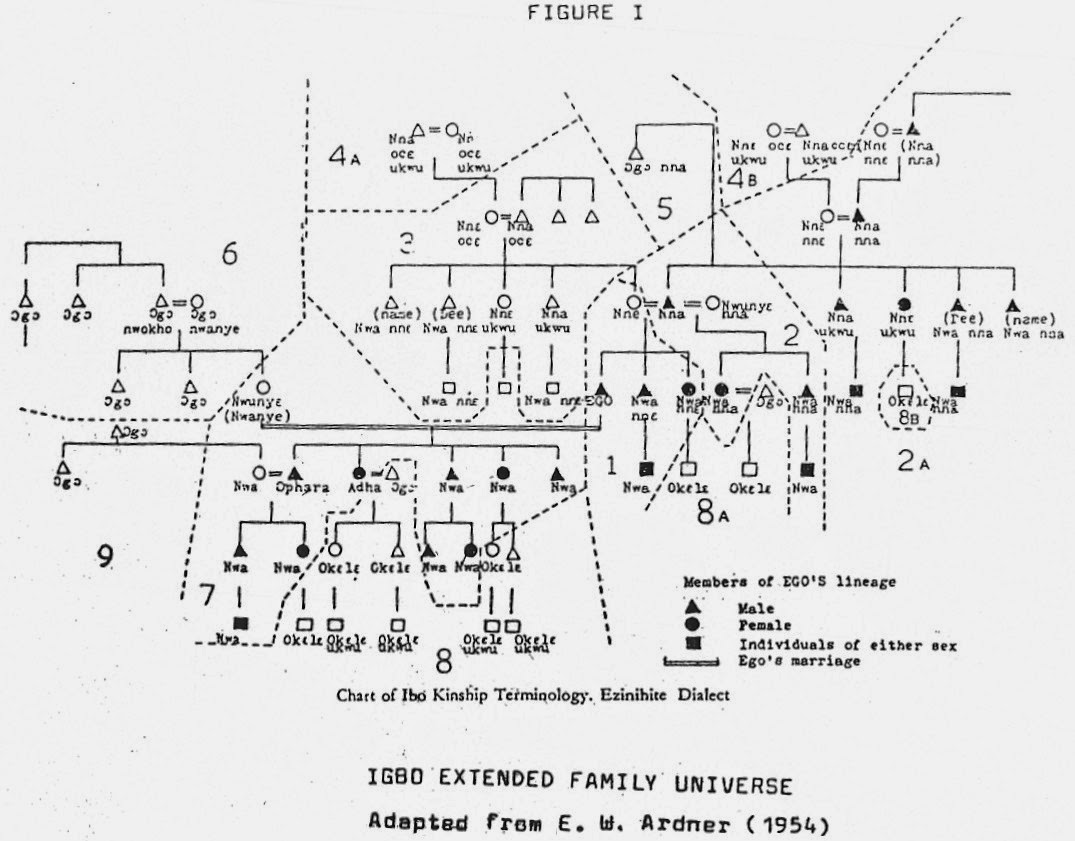 Imagine trying to visualize this family if the information were in a "traditional" genealogy program. There have been some attempts to diagram and even attempts to program these types of relationships but none have been adopted into the "mainstream" genealogy programs. See Tony Proctor's Parallax View blog, especially, "Happy Families." Even a program such as the one sold by Heredis.com can only reflect those relationships of which the family researcher is aware. As I grew up, I had very little, if any, contact with certain family members. In some cases, I knew some of the reasons, but in many cases, I only learned the reasons after spending a considerable time gathering family records and reviewing those records. The reasons for certain instances of lack of contact turned out to be complex.  Unfortunately, it is extremely difficult to reconstruct and even explain some of these relationship issues in the past. Sometimes we can only guess as to the reasons for lack of contact.

As genealogical researchers, how do we approach these complex family relationships? In some instances, making a chart or diagram will help with understanding these issues, but in all cases, the research that is done must extend beyond the core family to include neighbors, friends and any individuals associated through the cultural definition of family.

Here is one current example. Let's suppose the family we are researching contains one or more divorced family situations. How do the present and now, divorced, family members interact with each other? Are the former in-laws included in family gatherings or excluded? Do the siblings of the divorced family member correspond with the former spouse and children? These issues can be become even more entangled and the degree of connection can vary from instance to instance.

Although we may be painfully aware of these issues in our own immediate and living family, we seem to become inexplicably blind to these issues in our ancestors. Many researchers are firmly focused on a "brick wall" situation in their family line, but it has never occurred to them to widen their research to the entire extended family and include neighbors and friends. In one situation from my own ancestors, one of my Tanner great-parents families lived in a very small town. In the same town there was another Tanner family. They were related but not closely. The two Tanners were cousins. It would be all too easy to ignore this other family merely because they were not directly related to my "direct line" ancestors but to do so would be a mistake because the two families were necessarily closely associated through living in the same small town.

Awareness of extended kinship arrangements not only adds depth to our research, but will also aid in solving seeming intractable genealogical conundrums.
Posted by James Tanner at 10:03 AM