The Missing Links. -- The Last (or First) Link Back to Adam

Warning Note: In writing this blog post, I am not claiming that any historical or Biblical figure did or did not exist. I am merely examining the historical record to illustrate those ancestral connections that cannot be verified using generally accepted genealogical evidence and record sources.

As genealogists, we live in two worlds: one world that is governed by verifiable sources and another world that is a fantasy land of ancient pedigrees. I got started with this issue (oh, no, not again!!!) when my wife found Vol. XIX, July, 1928, No. 3, of the The Utah Genealogical and Historical Magazine. Pasted into the front of this issue was a huge fold out pedigree of several prominent Utah pioneers tracing their ancestry back to Adam. This started me thinking. Here is a photo of the unfolded insert: 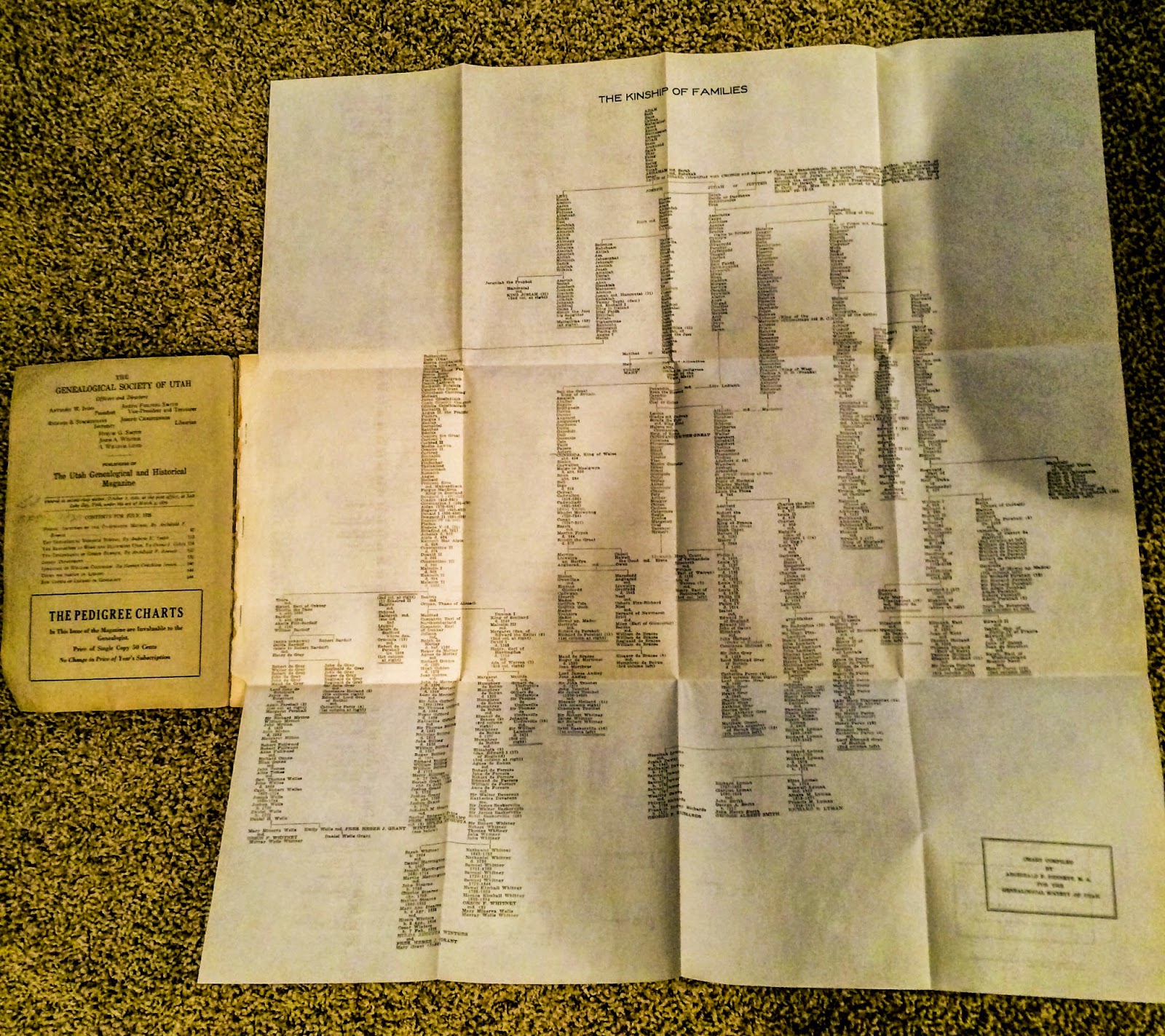 Then I thought, what if I search in FamilySearch.org Family Tree for Adam born in the Garden of Eden with a wife named Eve. Here is a screenshot of the results: 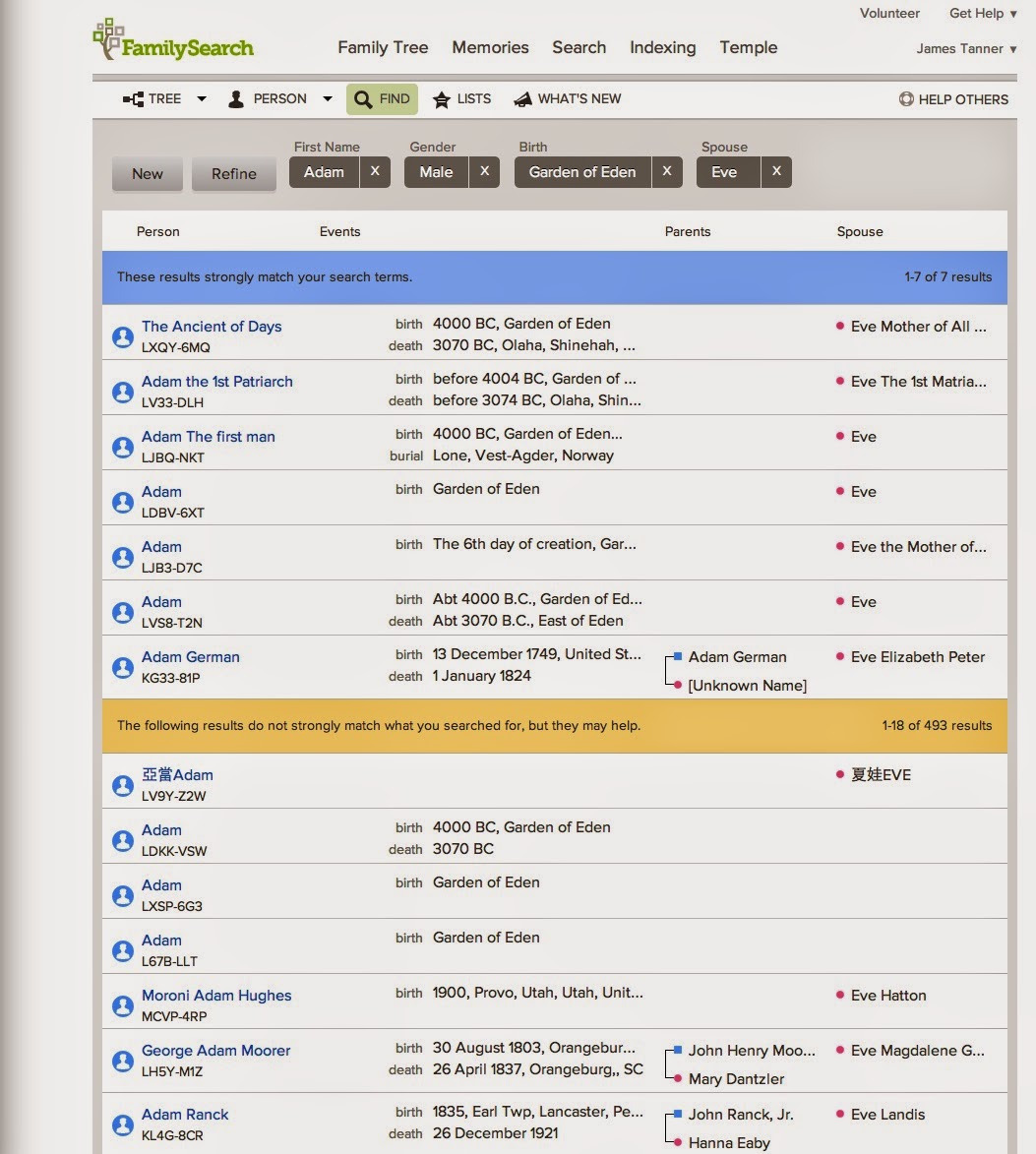 The most interesting entry is the one that has his burial place as "Lone, Vest-Agder, Norway." I was also fascinated by the death place of Olaha, Shinehah, East of Eden. I was wondering who transported to the body to Norway and how that was accomplished. I was also fascinated to learn the names of two more of Adam's children; Awan bint Adam and Azura Bint Adam. It was comforting to know that all these people were deceased.

I decided to follow the line down to see what happened. Oh, I almost forgot, the Adam I choose to follow did not have any sources. I was wondering if the person who added this to their own pedigree had read the Bible. The did have a picture however. Here is a screenshot: 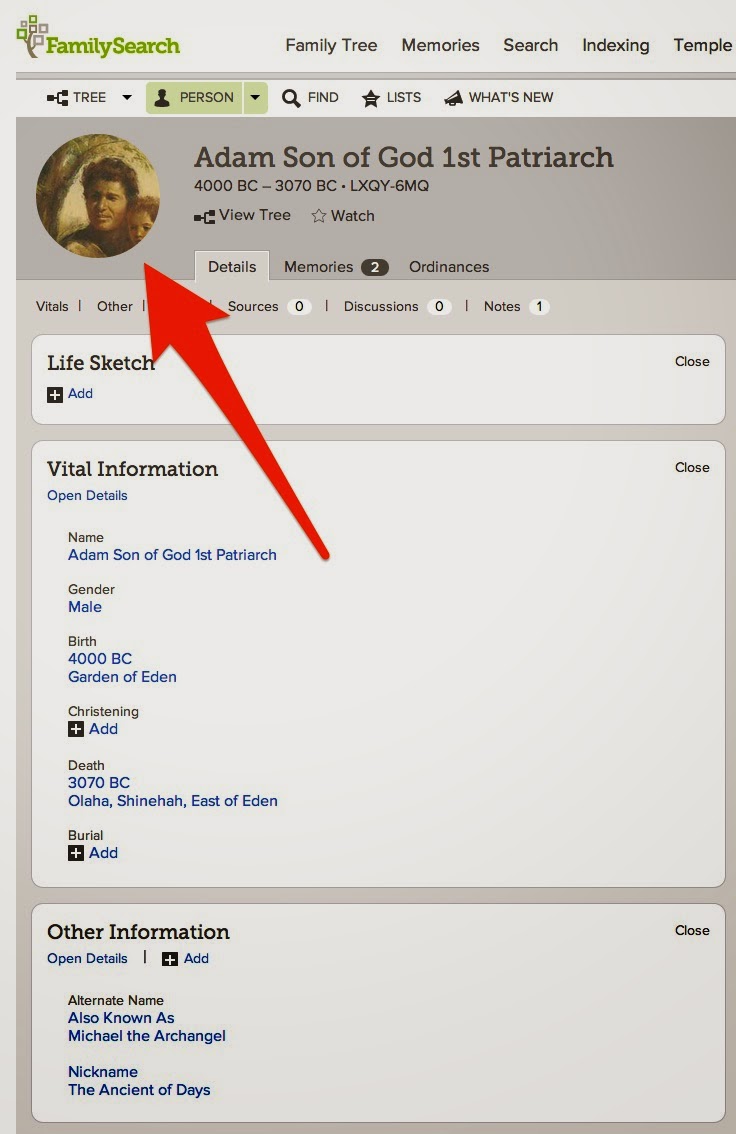 I have cut off the names of those who have edited this entry, for obvious reasons. Well, this one was a dry well, it showed a son, Seth ben Adam, 2d Patriarch, but no children for Seth. I guess I will have to try another. The next one had the couple of Seth ben Adam married to Azura bint Adam with one child, Enos ben Seth. I am guessing these people must have spoken Hebrew or a related language.

OK, I will not bore you with the clicking down through the names. Unfortunately, I not able to verify any of the sources, since none were listed. Apparently the first group of descendants all lived in the same town or subdivision; Olaha, Shinehah, East of Eden. I did get to an interesting name rather quickly; Barakiel ben Enos. I found out the following from Wikipedia (I am really glad that at least I have a reliable source):

Barachiel (Heb. ברכיאל "Bārkiʼēl", Lightning of God; Arabic: بُراقيل "Burāqīl") is one of the seven Archangelsin Eastern Orthodox tradition.
In the Third Book of Enoch he is described as one of the angelic princes, with a myriad of some 496,000 ministering angels attending him. He is counted as one of the four ruling seraphim, and counted the prince of the second heaven and of the order of confessors. He is described in the Almadel of Solomon as one of the chief angels of the first and fourth chora.[1] He is regarded as the angel of lightning.[2]

I was puzzled how Barakiel or Barachiel got born in Olaha, Shinehah, East of Eden, but I guess that is one of the mysteries. However, there was no mention of him being fathered by Enos.

So, I thought I might just try another line. I went back to my search and choose another Adam (I was not certain if the people who added all these Adams checked for duplicates or really thought there was a whole congregation of Adams out there to choose from).

Third try. This one was buried in the Lone and Dreary Wilderness. I know exactly where that is. It is located just west of Provo in Skull Valley. Just in case you are losing faith, here is the screenshot of this entry: 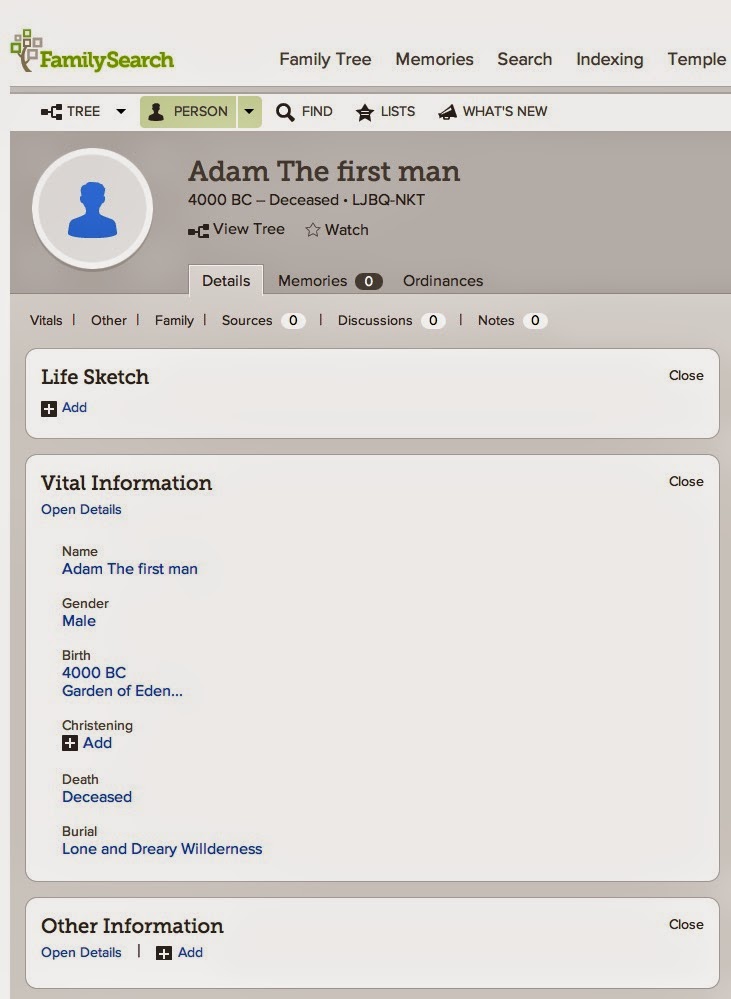 This one also had a son named Seth and so forth. Still no sources. I am really puzzled where these people got this information, if it was not in the Bible. But I started clicking down through the descendants. No birth or death information, just the reassuring note that they are all deceased. I did recognize all of the names of the descendants. I guessed that this submitter had read the same books I had. I was interested to get to Noah to see which of the three sons would be listed. Apparently, this person needed to do a little more research, only one son, Shem, was listed. I wondered how he or she came to the conclusion to neglect to mention the other sons and their wives. I also wondered if a DNA study would give me some conclusive evidence to choose which of the sons I was a descendant from; Shem, Ham or Japheth.

I finally got down to Arphaxad and apparently these particular genealogical researchers were not big on identifying other family members or wives. Reminded of some other pedigrees I had seen lately. OK, so now we were down to Selah.Whew, a bit more clicking and I was at Abraham. I began to wonder where all the other people came from? I got a little perturbed with this line when I got to Abraham and his wives etc. were not listed. Finally, when I got to Judah, he had two sons and a wife.

I was a little disturbed when I got to Aaron. He had four sons but none of them had any children. The line went on through Nahshon. Just in case I had forgotten that these people all spoke Hebrew, the line continued with Obed ben Boaz and his son, Jesse ben Obed. Hmm. Then it got really strange. King David was married to Maacha von Gessur ( a German??). Dates started showing up about here. Oh dear, this line ended with Amazja von Juda (still speaking German) in 826-773. Back a ways to see what else I could learn. Suddenly, with Rehoboam Rey de Judá, they all started speaking Spanish. Still not a lot of wives around. It is a wonder these lines could keep descending without women.

By the time I got to Jehoshaphat King of Judah, they were back to speaking English. Its a good thing read  and speak some German, Hebrew and Spanish, I can get along with all my ancestors. Oops, apparently Jehoshaphat must have married a Spanish speaking wife, his son was Jehoram Rey de Judá.

This is getting a little bit ridiculous. I decided to quickly skip ahead through all the Reyes de Judá and see what happened. Oh dear, not again. The line ended with Josia ó José Rey de Judá (apparently, whoever put all this in Family Tree (remember this is coming right out of Family Tree) didn't speak much Spanish when he or she put an accent on the "o." Now I was completely lost with no where to go. I tried another line and that link was missing also. I was at a loss to guess how to find the descendancy line and then I remembered the wonderful Descendancy View. I backtracked to King David.

I kept following one line until it got to Éloiémaï David in 100 BC and then it started to go backwards with names of of people born with higher numbers. I finally figured out that they must have jumped over the 0 mark and were going positive. Every other generation was an unknown name. I figured I had reached the end of the line.  I am entirely puzzled by all this. I did not find even one entry with a source.

I finally got tired of the whole thing and decided I had enough when they switched back to Hebrew. I would call this a wild goose chase but what do I know. Here is a screenshot of part of what I found: 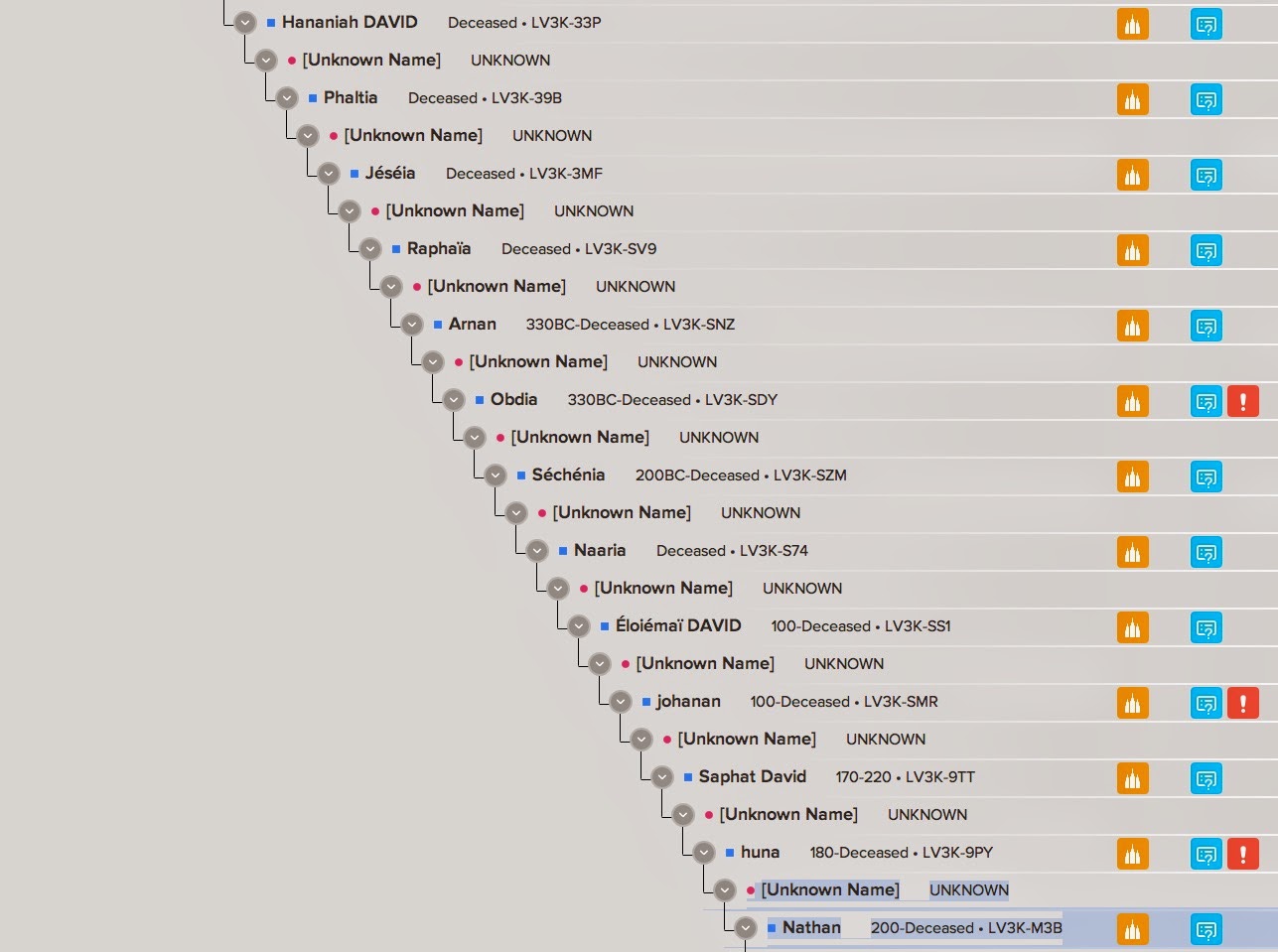 The red caution notices were for people who were born before their father could have children or before the father was born. This gave me a lot of confidence in the pedigree. This is the fantasy world I was speaking about at the beginning of this ridiculous post. Oh, wait a minute, this post isn't ridiculous, the pedigrees are.