Middle name creep: the process by which descendants or other interested parties give an ancestor or historical figure a middle name after his death, the error then spreading in genealogical databases, e.g., Erastus “Fairbanks” Snow, George “Eskridge” Washington, John “Hamilton” Morgan, etc. 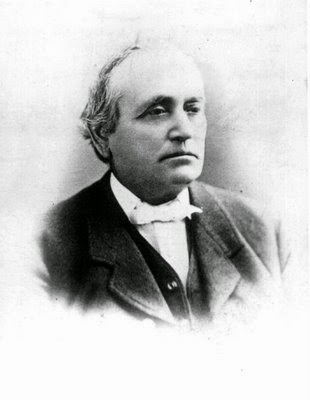 This influential early Mormon Apostle joined The Church of Jesus Christ of Latter-day Saints in Vermont in the 1830s and directed the Southern Utah settlements. The town of Snowflake, Arizona, was half named after him.

How did he acquire the middle name “Fairbanks”? Snow participated in plural marriage and went on the underground in the 1880s. While on the underground he used the pseudonym “Fairbanks,” probably because he was named after Erastus Fairbanks, and sometime after his death, [1] someone attached “Fairbanks” to his name and it was used in family records for decades until descendant Donald R. Snow, now retired from the BYU Math Department, tracked down the origin and use of the name, and recommended it not be used anymore.

Due to Middle Name Creep, many Ancestry family trees still use the name “Fairbanks,” [2] and his books are cataloged on WorldCat under the name, “Erastus Fairbanks Snow.”

No, he did not have a middle name. (See his birth record in the Washington family bible here.)

George Washington’s Middle Name Creep seems to be based on speculation that his mother named him after her guardian, George Eskridge.

George Jarvis (1823-1913)
Several years ago, my father and I noticed that English sailor and Mormon convert George Jarvis was showing up in genealogical databases with a middle name, Franklin. My father would correct his name and give an explanation, someone would switch it back, my father would correct it, and so forth. At some point the situation became ridiculous, so I decided it was time for some overkill, and wrote a comprehensive guide proving that George Jarvis did not have a middle name: [4]

Did George Jarvis Have a Middle Name? No. 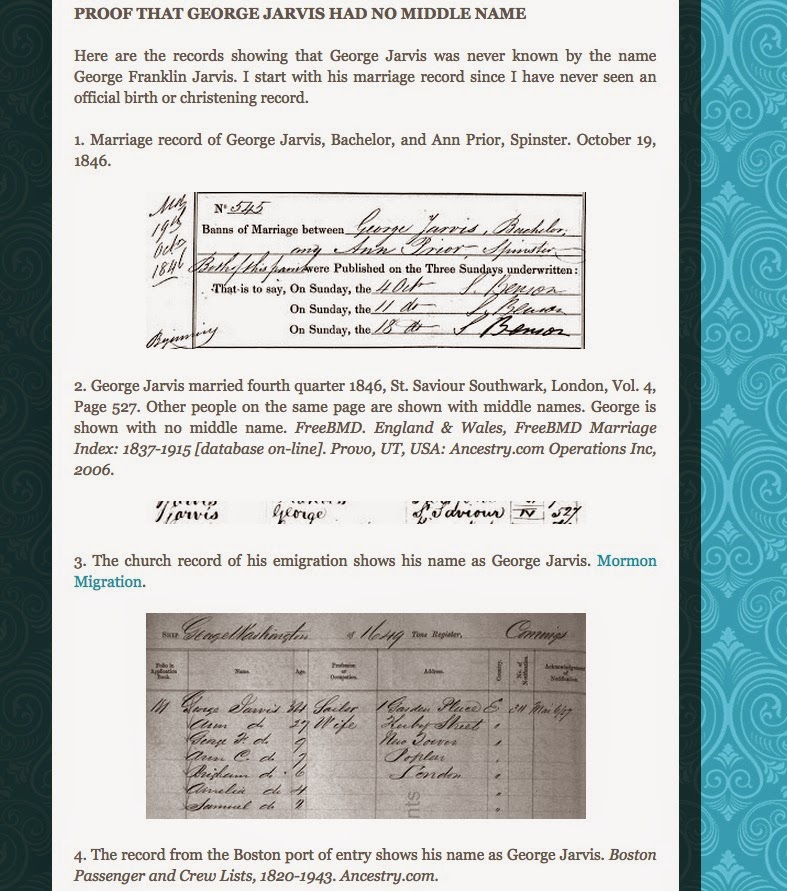 Ira Hatch (1835-1909)
Ira Hatch was the son of New Englander Ira Stearns Hatch. Ira was a missionary to the Indians and a participant in the Mountain Meadows Massacre.

My husband and I were recently discussing American Indian slavery, and I pulled up Ira’s FamilySearch Family Tree entry to see what racial category was used in the census for Ira’s children with his Piute wife Maraboots (Sarah Dyson).

To our surprise, someone had changed Ira’s name to “Ira Steven Hatch.” Ira is not a relative of mine or an ancestor of my husband, but the non-sourced change was so ridiculous [5] that I switched his name back and noted tersely, “No middle name.” [6]

Hopefully this Middle Name Creep is of short enough existence that it will not infect the Hatch family genealogy. [7]

John Morgan (1842-1894)
John Morgan was a Civil War veteran, one of the Presidents of the Seventy in the LDS Church, and long-time President of the Southern States Mission.

As long as he’s been in my consciousness—he’s my grandmother’s grandfather—I’ve “known” that his name was John Hamilton Morgan. My father notes that the error was perpetuated as late as this morning, when he used the middle initial in his blog post: "Was your ancestor in the military?"

It took a few years of working with his history for me to realize that John Morgan is never listed with the middle name Hamilton in any source created during his lifetime.

His Middle Name Creep may have originated with the book The Life and Ministry of John Morgan, which includes the following statement from his son Nicholas: “Although christened ‘John Hamilton Morgan,’ the ‘Hamilton’ name coming from his mother’s people, my father confined his name, throughout his mature life to ‘John Morgan.’”

Nicholas may have been correct, but he was a young boy when his father died, and since no sources corroborate his memory, John Morgan should be listed without a middle name. [8]

Edwin Pettit (1834-1924)
Edwin was born in Long Island, New York, and after bring orphaned made his way west with the Mormon pioneers. He went to California to join the Gold Rush, but eventually made his way back to Utah and married and raised a large family.

He was a master storyteller and one of his stories is in the lovely children’s book, I Walked to Zion. Unfortunately, by the time the author chose his story for the book, Edwin had become a victim of Middle Name Creep. Someone had renamed him Edwin Alfred Pettit, and that’s how he showed up in some of the genealogical databases, so he is Edwin Alfred Pettit in the book. [9]

The Pettit family does not seem to be as tenacious as the Jarvis family, so a simple explanation sufficed, and his name has remained correct in Family Tree for several years although the middle name “Alfred” sometimes shows up in Ancestry.

Moral of the Story
I could suggest a number of morals, but will leave the task to you, and if you know of any other examples, please do share.

Notes
This was originally posted on Keepapitchinin: The Mormon History Blog.

[1] To illustrate that the Middle Name Creep happened after his death, Erastus Snow’s gravestone does not include the name Fairbanks, but his FindAGrave entry does.

[2] Last month someone contacted me for information on Erastus Snow since I have his records in a private Ancestry tree that I created for researching the Eminent Women of the St. George Temple project, and I saw that when I added him to my database several years ago, I’d added “Fairbanks.” Since he’s a minor figure in the project, I’d never looked at his information since, so I fixed his entry and thanked the woman who contacted me for bringing that to my attention. She snapped back, “Please know that Erastus’s middle name IS Fairbanks.”

[3] The error shows up continually on Ancestry and FamilySearch Family Tree. He also occasionally shows up as George Augustine Washington. Augustine was his father.

[4] The George “Franklin” Jarvis error had made its way into the Mormon Overland Travel database, which helped perpetuate the use of the spurious middle, but an explanation to the missionaries who run the database fixed it.

[5] Not only is “Ira Hatch” used exclusively as his name, except in the cases where he’s mistaken for his father, Ira Steans Hatch, or listed by his Indian nickname, “Pu-am-ey,” but the spelling of “Steven” was a red flag since that would be an atypical spelling for the time and place of his birth.

[6] In cases like this I normally ask for information or make the change and note that if someone cares to prove otherwise, I will happily look at the documentation.

[7] The change was made on December 2, so if this error shows up elsewhere, it will have happened very quickly.

[8] The only time John Morgan is known to be listed with a middle name or initial is in the 1850 Census, where he is clearly shown as John W. Morgan. The only “W” name in the family, except for his older brother William, is Woodson, the name of an uncle, so if he did have a middle name that he didn’t use, it was more likely to be Woodson than Hamilton. Despite my speculation, FamilySearch Family Tree has recently started locking certain entries, and John Morgan’s entry has been locked, so he will remain John Hamilton Morgan there; and, to be honest, “Hamilton” does help differentiate him from the many other John Morgans. As my husband said, “Living with a little ambiguity is better than inventing middle names.”

[9] Alfred was Edwin Pettit’s brother, and I’m not sure the cause of the confusion.
Posted by Amy T at 10:00 AM