In my last post in this series, I started to examine the probate file of Caleb W. Haws filed in Utah County, Utah. This particular file had 62 pages of documents. As I noted in the previous post, Caleb died in 1871 in England but his probate was ultimately not concluded until 1904.

Moving along through the file, the Inventory and Appraisement is often neglected by researchers because it seems to be a simple list of items owned. But if you think about it, the property we own at the time of our death is a pretty good indication of our economic level, our work and interests. The amount of property or lack thereof is a good indicator of the number of additional records that might be available about an individual or family.

By now, you should be aware that a complete probate file is going to contain some of the same types of documents even back into the dim past. One type of document present in the court system is the cover sheet. These documents can be used to established when certain actions took place in the court. The Orders and other filings may have dates other than the date of actual filing of the document with the court.

The last documents I included in the previous post were dated in 1884. We are now 13 years after the death of Caleb W. Haws and still in the midst of the probate proceeding. The next document is the Decree Authorizing Conveyance. This follows the pattern of a petition, followed by any response thereto, the setting of a hearing, holding the hearing, issuance of an order and then the final decree. Some or all of these terms may be unfamiliar in this context but similar terms are used today as they have been for many, many years. 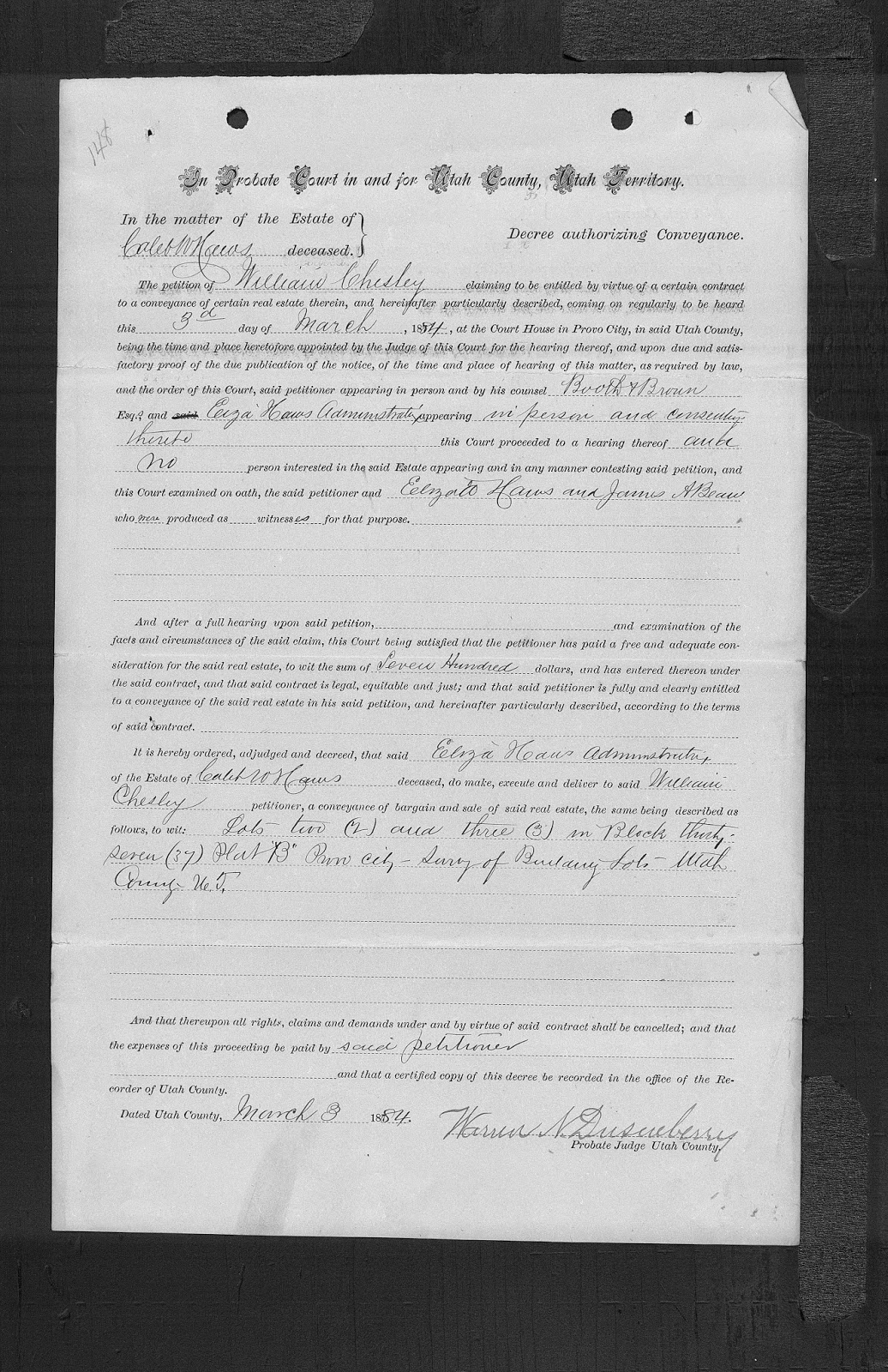 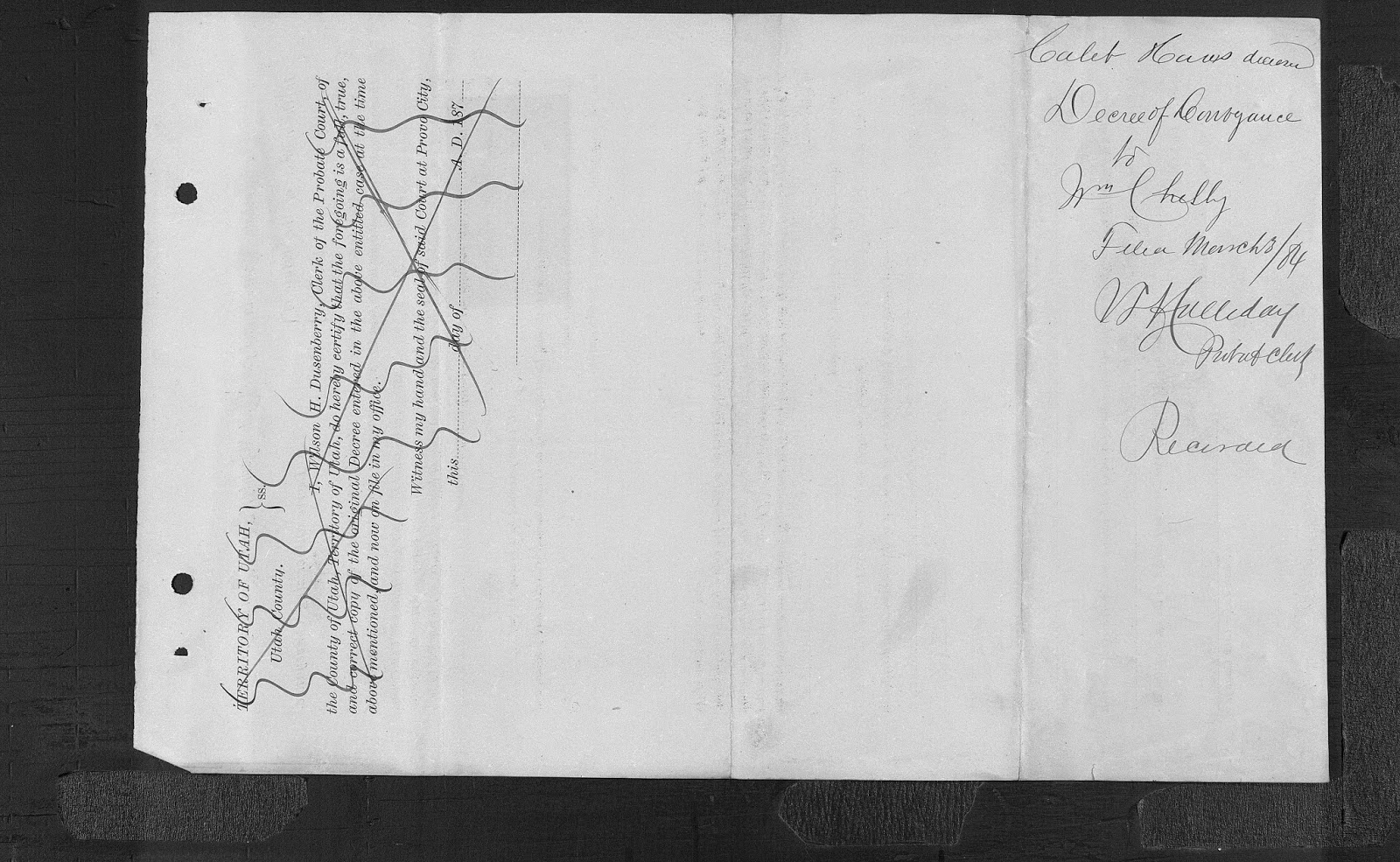 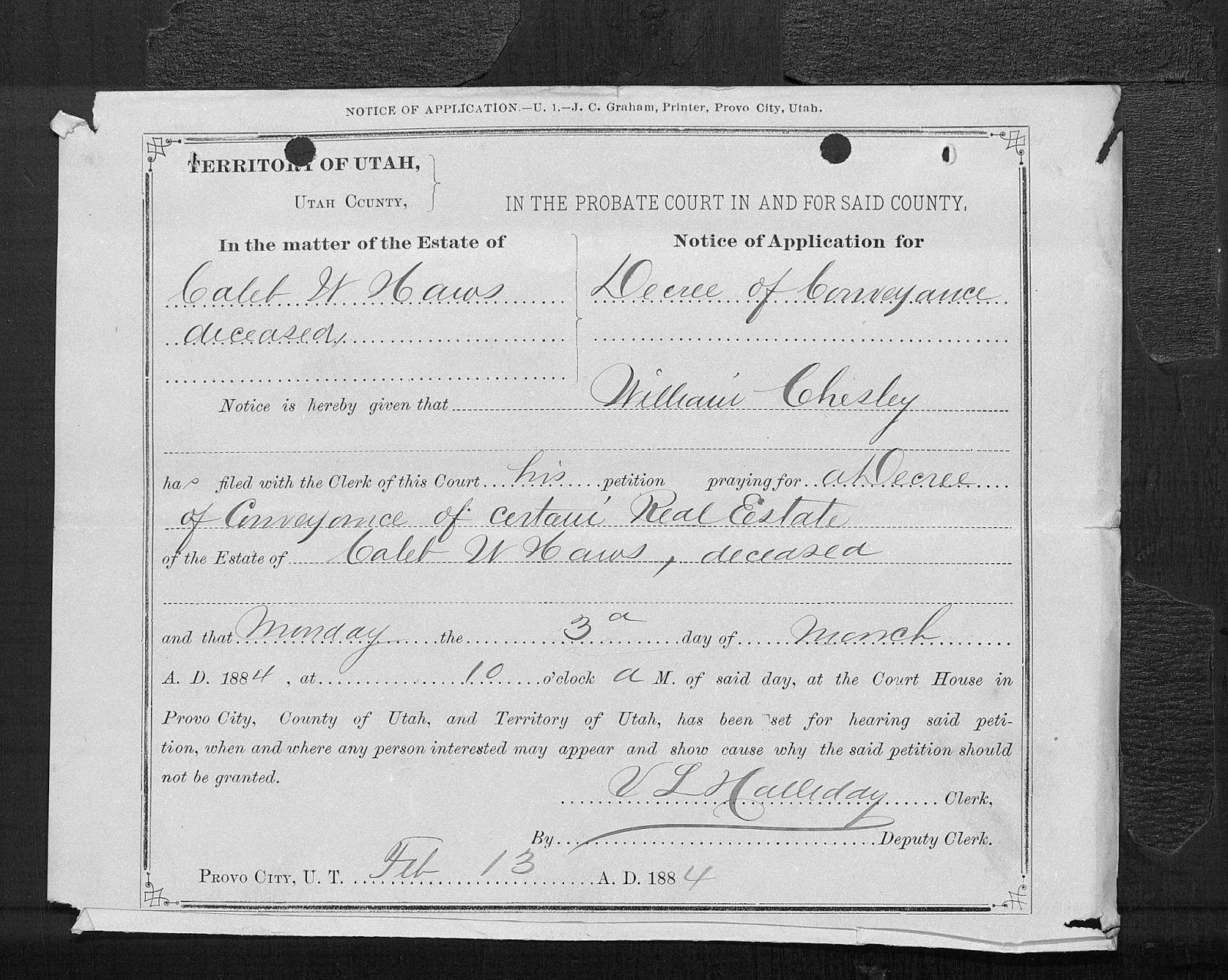 From my own perspective, the next document is rather strange. Not that the document itself is strange, but the fact that it was prepared and filed so long after the death is interesting. This is the Proof of Publication of the Notice to Creditors. When a person dies, they may or may not have creditors, that is, people or entities that claim to be owned money by the deceased. Many times the debts of the deceased are "taken care of" by the heirs (survivors) in an informal way. But in order to be assured that there are no more unknown claims, the probate procedures allow for a notice to be given generally to the public requesting that anyone who thinks they have a claim against the deceased come forward and present their claim. The laws usually provide that unless this is done within a stipulated time period, the claims are then barred (prohibited from being asserted). Here is the Proof of Publication: 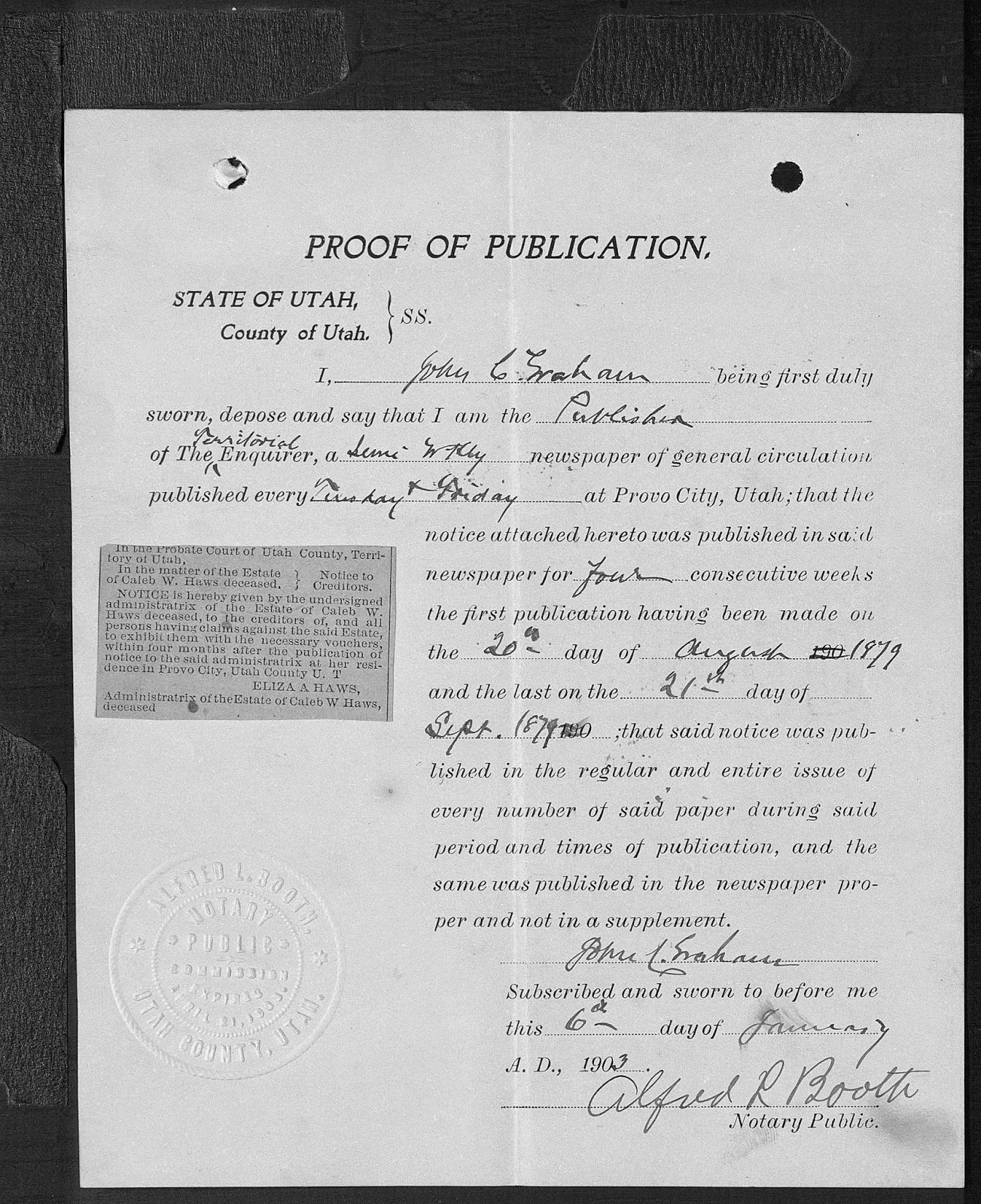 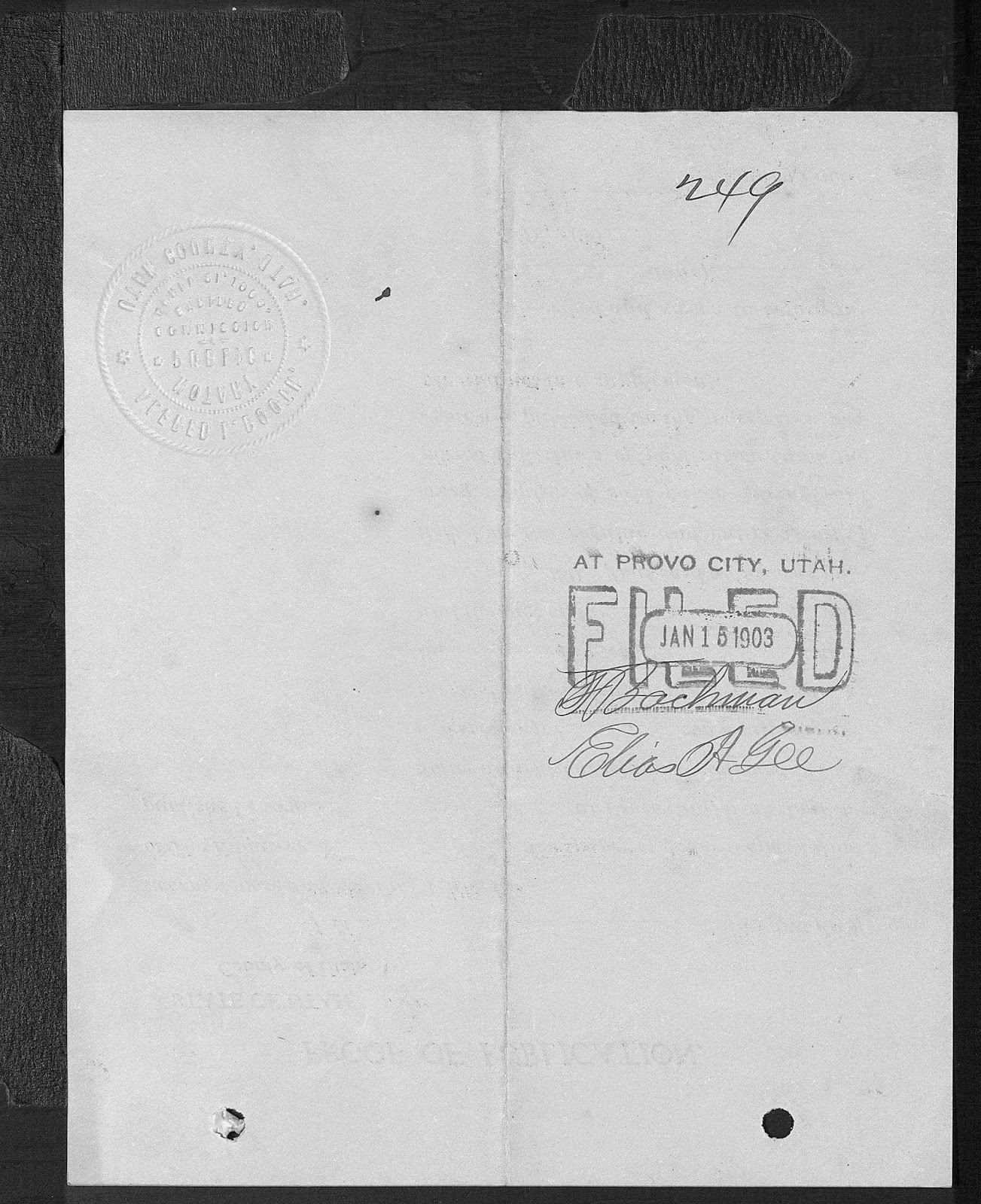 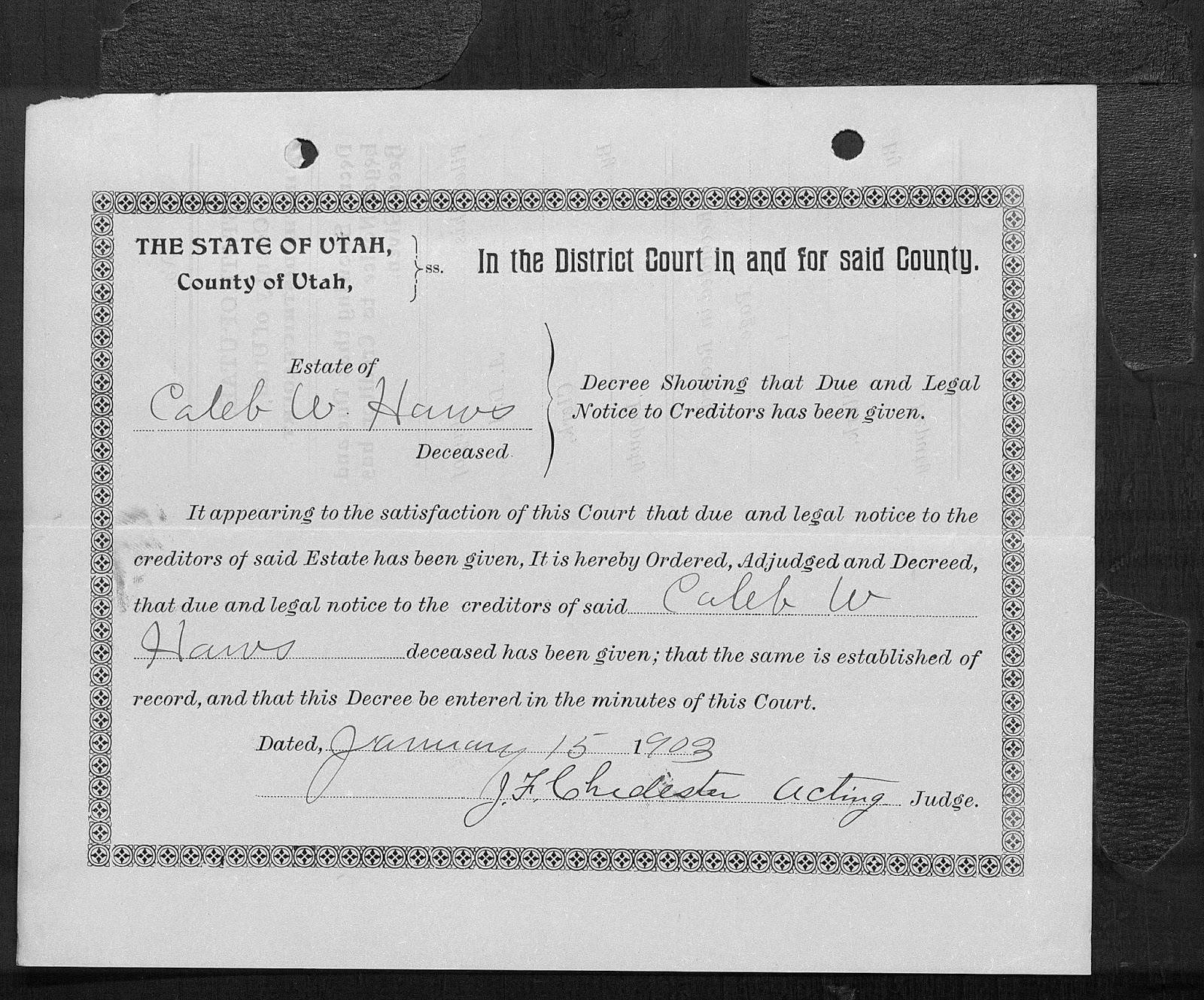 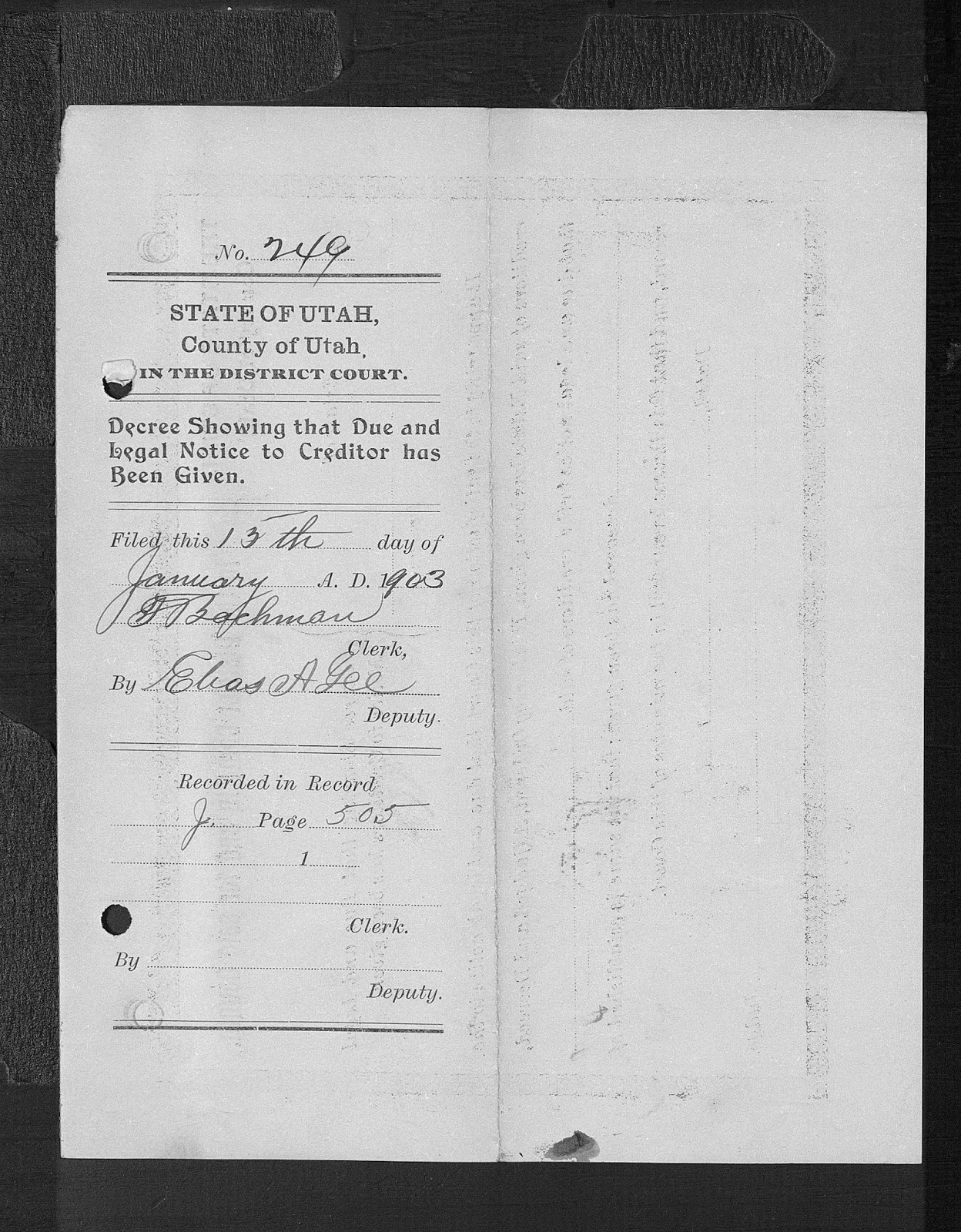 The strange part of these particular documents is that the publication took place eight years after the death of the decedent and the Proof of Publication was not filed until almost four years later in 1903. Anytime during that time period any creditor could have come forward and made a claim. It is certainly in the best interests of the heirs to have this time period as short as possible as allowed by the laws and procedures in effect. So much time passed in this particular case, there was a substantial risk that the laws and or the procedures could have changed during the pendency of this action (not a very good situation).

You can probably get the idea that there are several steps in the filing process in the probate court: filing, notice, proof of notice, hearing, order, decree. You will see the same pattern over and over again.

Once we get to this point in this particular probate, we see a dramatic change: typewritten documents. I might mention that in today's court system in Maricopa County, where I practiced, the rule has been implemented that all documents are filed electronically. Now we get to the interesting part of the proceeding. The Administratrix dies. Here is the document filed by the son, Caleb W. Haws, explaining to the court everything that has happened: 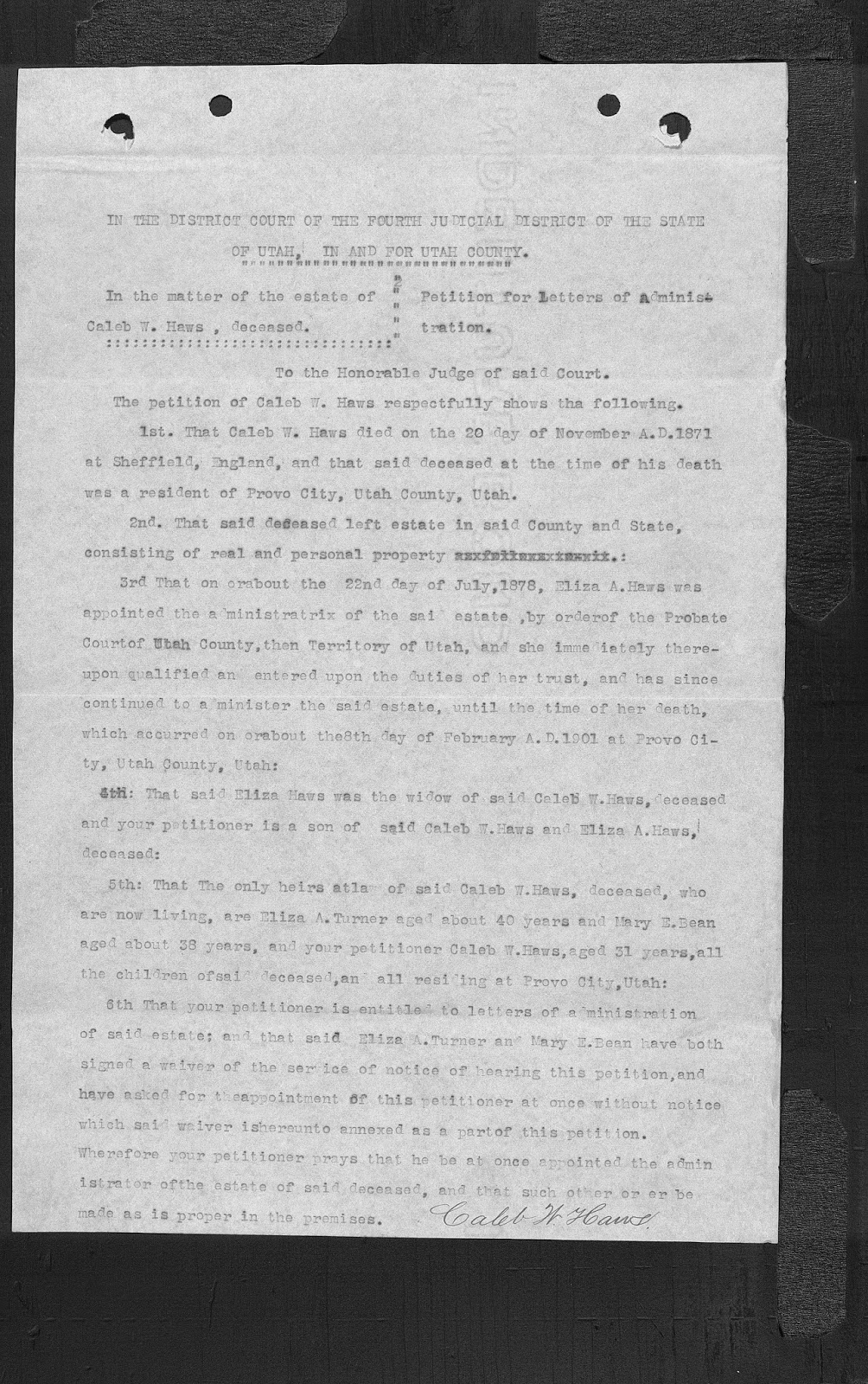 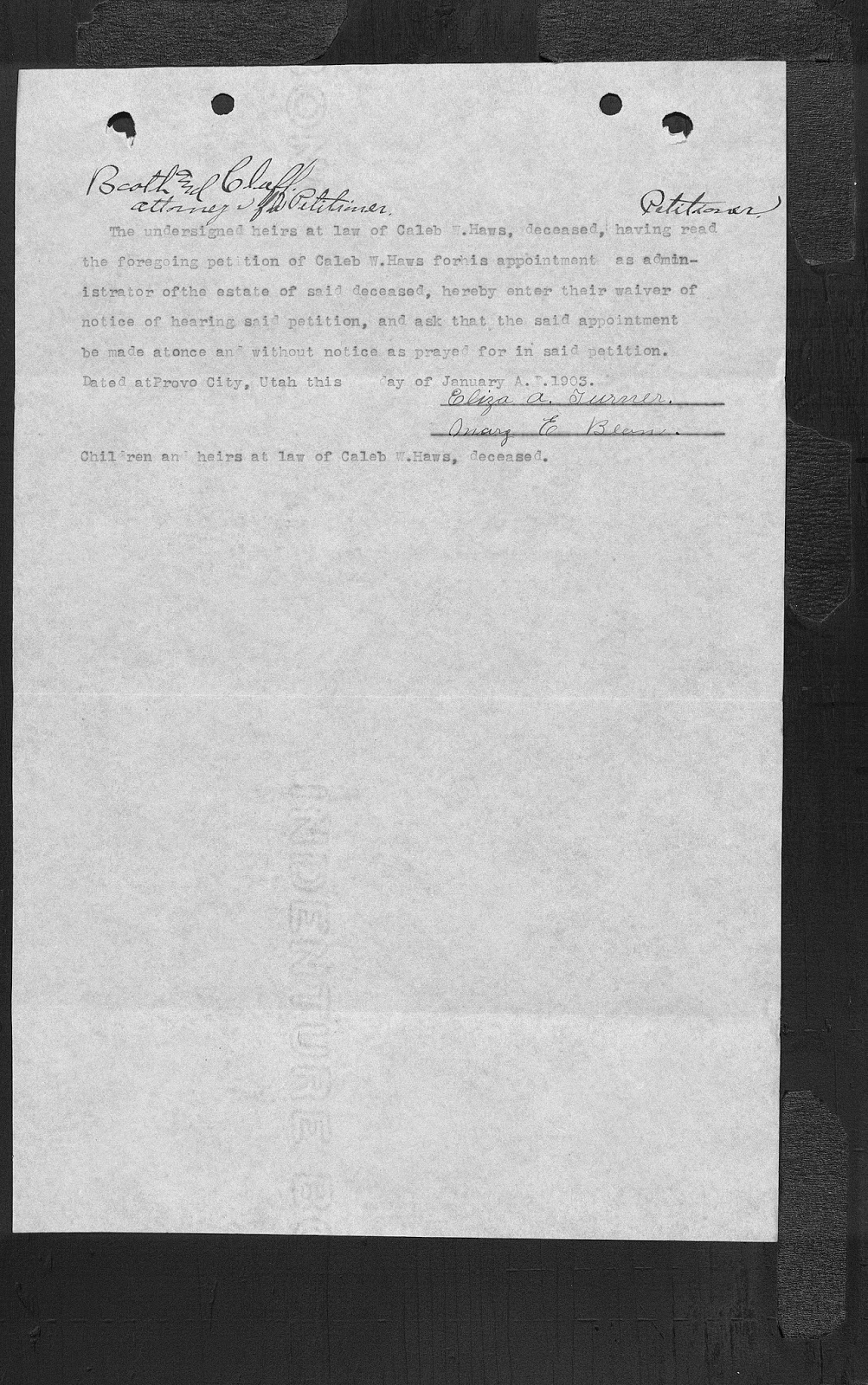 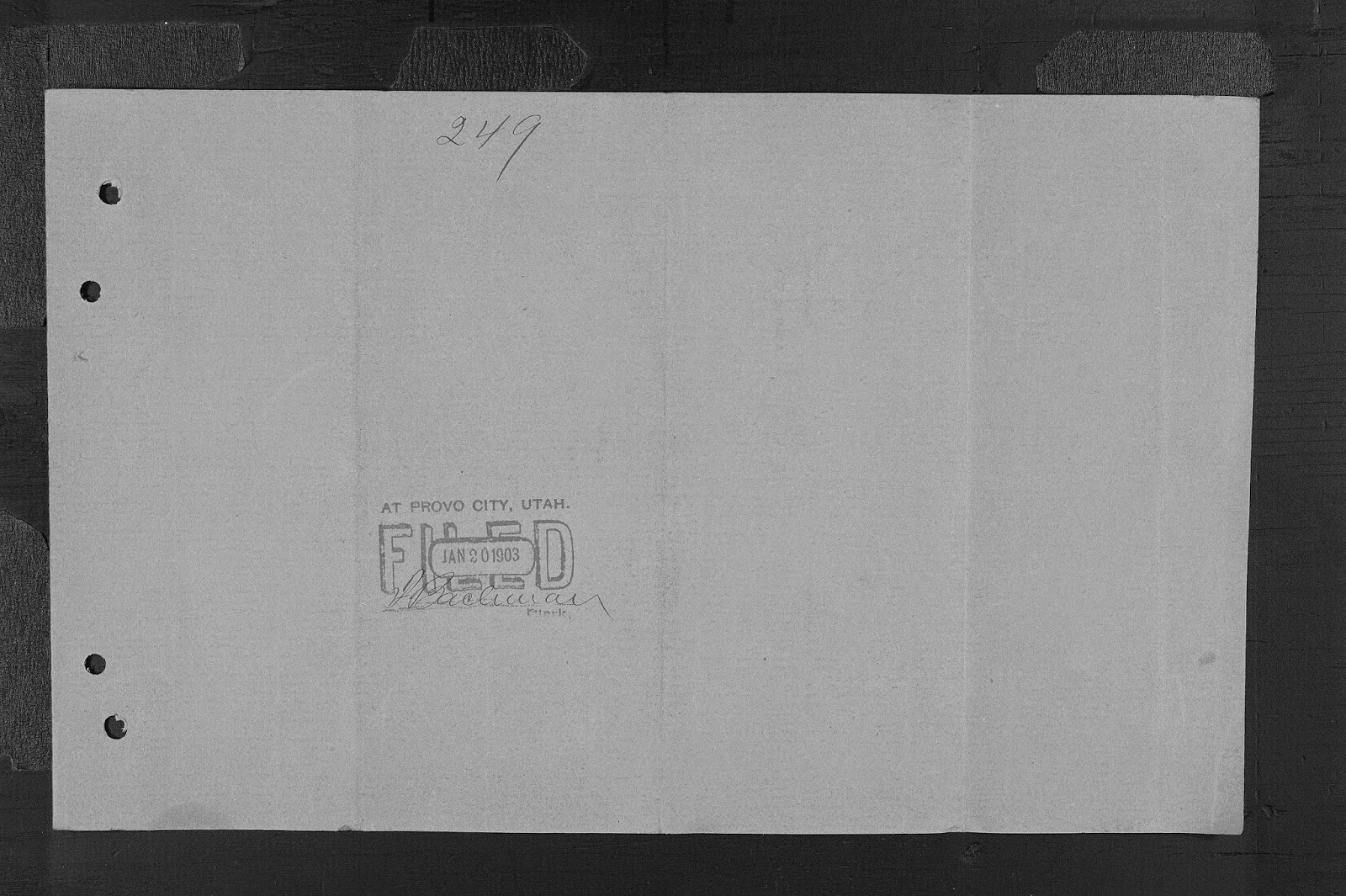 If you are lost at this point, I suggest that you read the above petition carefully. You can click on the images to see them in larger size. You will see that this contains an additional bonanza of information in that it gives the children and their ages at a certain point in time. The suggests birth and marriage records could be located, but if not, then here is first-hand documentation of the family members and their ages.

Here is the order appointing the son, Caleb W. Haws as the new Administrator of both his father's and mother's estates. You might notice that the other heirs joined in to waive the requirement for a hearing. 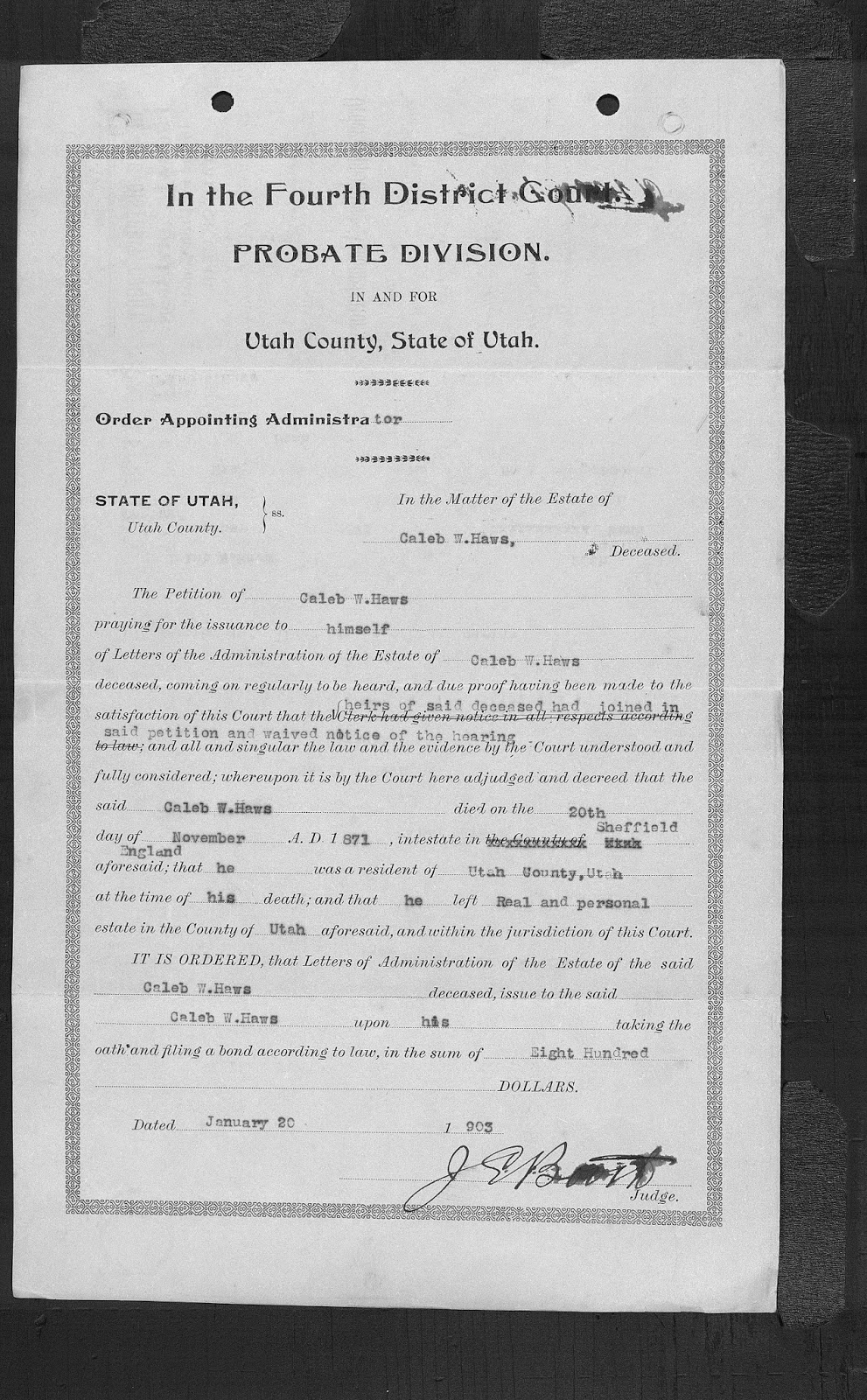 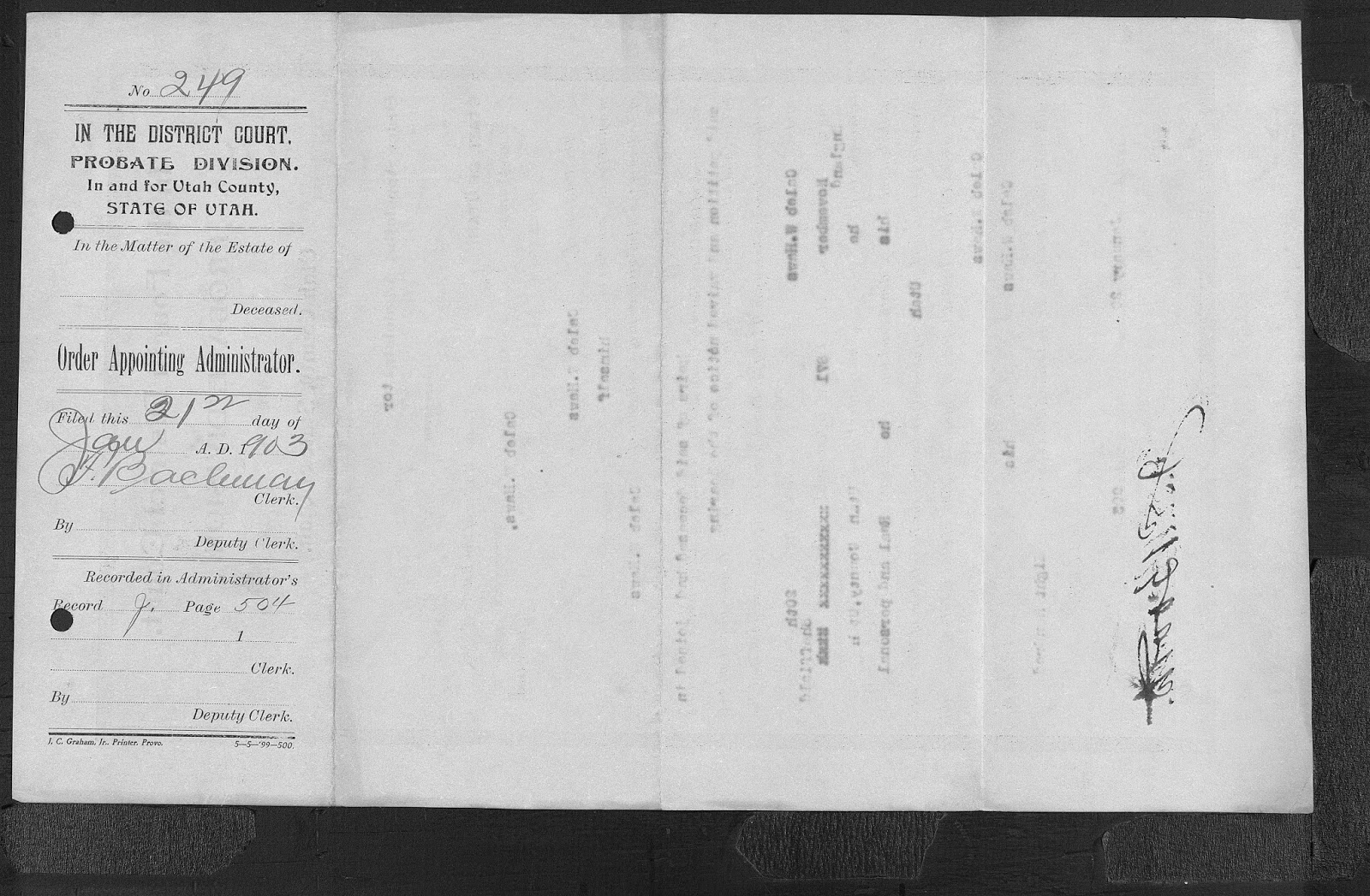 Now, in a sense, we are back at the beginning of the probate action. But this is not nearly the end. I hope that you have the patience to continue learning about these types of proceedings and have an appreciation for the wealth of information contained in a probate file. Even if the file seems to be rather short, the information can be valuable. I might add that this particular proceeding is in no way unusual in the overall world of probate. I choose this file at random but although I view the time periods as unusual, the rest of the proceeding is not unusual.

Stay tuned for the continued parts of this particular post in the series on probate. I realize that this particular series is getting rather complicated, but I can only say that it is a lot less complicated than an actual probate case.

The Ins and Outs of Probate for Genealogists - Part Six - Where do I find probate documents?