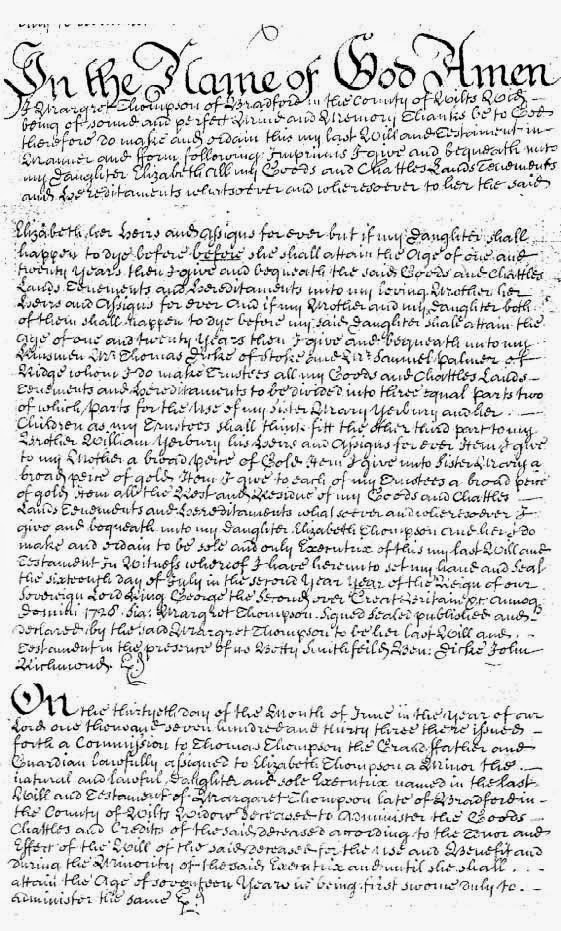 Legal language is extremely conservative. A will written in the 1700s contains some of the same language as one written in the 1900s. But this is changing. There is a definite movement among those in the legal profession to "modernize" or update the language in all legal documents. This is both good and bad. In the United States, we rely on the English Common Law system with a few exceptions. This is a system that relies on stare decisis, that is the precedence of prior court rulings. When you change the language of a document, such as a will, you may have to go all the way back through the court system to determine what the new language means and how the change in the language applies to the current law. For this reason, there are still a number of attorneys that rely on the old forms.

The fact that the language, particularly that used in wills, has changed very little over many hundreds of years, makes reading old wills much easier for those already educated in the law. On the other hand, the old language and terms can make reading a will for those not initiated to the language, extremely difficult. Like many areas of genealogical research, using old legal documents can be a challenge and take some considerable study and experience. Fortunately, there are extensive resources both in books and online.

The most common and most valuable book for understanding legal language is the Black's Law Dictionary. This book has been reprinted a number of times and is currently in the 10th Edition. For genealogical purposes, even some of the oldest versions are useful. A new paper copy of the latest edition will set you back about $80, but there are a number of copies of the older editions online for free. Here are a few links. The idea here is to use the dictionary to understand any terms you are not familiar with.

I debated listing some of the common terms in this post, but the problem is where to stop. There is also no clear distinction between what is common and what is not. Some of the more archaic terms from antiquity have disappeared and some of the more modern terms change meaning from state to state. For example, in the 1970s, there was a national movement to adopt a Uniform Probate Code (UPC). Arizona adopted the UPC just as I started law school. Only 16 states adopted the entire code and now, almost forty years later, the provisions of the UPC have been modified many times. The terminology used by the UPC is markedly different than the traditional language used in wills in other parts of the country.

When you begin the process of trying to decipher an old will, you may find that the handwriting is first of many challenges, especially if the will was a holographic will or written by the testator himself. On the other hand, once you have penetrated the handwriting, you may find that all wills in the English Common Law tradition follow a similar pattern. Rather unfortunately today, there are an abundance of online websites that encourage people to "write their own will." Sometimes these websites contain a sample form for a will. The unfortunate part of this is that they ignore the differences in the formal requirements of a will from state to state and despite the efforts of the testator, the will could be declared invalid. There are, notwithstanding the differences, some common provisions of wills.

Here is a list of the common provisions, which may come in about any order, that you might find in a will;
Remember that the will is the document executed by the living testator. It is only the first step in probating an estate. You might want to go back and read parts one and two of this series. This may turn out to be a very long series.