Was your ancestor in the military? You might want to be careful to follow the right ancestor

The need for genealogists to be aware of the history surrounding their ancestors is no where more evident than the importance of military records. But even if you have made a search for records usually associated with military service, you should also be aware that there are many other types of associated records. The record shown above purports to be for my Great-Grandfather, John Morgan, is an excellent example. The record would not normally be considered a "military" record but it could be an excellent way to identify the pertinent records and also provides additional valuable personal information. This particular collection of over 18,000 records is described as follows in the FamilySearch.org Research Wiki:


This collection is a card file consisting of thousands of cards arranged by county, then by city, and then by the veteran’s name. Only in Salt Lake City were the records filed by cemetery and then by veteran’s name. The records cover the time period from the earliest territorial time to 1966.

These records were compiled by the Military Records Section of the Utah State Historical Society. Form letters were sent to the next of kin of deceased veterans and the information returned was transcribed onto printed cards. This process began about 1957 and continued until 1970. Beginning in 1969 the information returned was entered directly into a database and the transcribing of information onto cards was abandoned the following year. The database continued to grow and information formerly on cards was entered into the database until 1986. In 1990 the existing cards (and some form letters) were microfilmed and subsequently destroyed. The collection published here is derived from microfilming completed in 1966 and therefore excludes any of the subsequent additions to the collection. The records identify thousands of men buried in Utah who had served in the United States military.

These records were compiled to track veteran burial locations to assist veterans’ families in obtaining grave markers and help veterans’ organizations to place flags on graves on Decoration Day (later designated Memorial Day). The records are fairly reliable considering that they were compiled from responses to a form letter.

In this particular case, locating John Morgan's actual military record could be relatively difficult because his name is quite common. Without specific information, such as that given in this record, you might not be sure you had found the right person. But the real question is whether or not the information in the record is correct. In this case, as you will see, it is not. You might take notice of the explanation of these records as "fairly reliable."

Using the unit designation above, that is coupled with the additional personal information about John Morgan such as birth date and the place he enlisted, I go directly to the description of the records for the 123rd Regiment of the Indiana Infantry also contained in the FamilySearch.org Research Wiki. The first record website I find from the Research Wiki is the The Civil War Archive for Union Regimental Histories for Indiana. It is likely that the record for a Private, such as my Great-Grandfather, is not going to be extensive, so a history of the Regiment that he served in will be a great assistance in discovering and verifying what he did during the U.S. War between the States or Civil War. The website gives a timeline of the movements of the Regiment and the casualties. It appears from the service dates of John Morgan, that he may have served during the entire existence of the 123rd Regiment.

From this point, it could be possible to do further research on each of the battles and get an excellent idea of what happened to my ancestor during the War. In addition, there is a reference on this one website to a collection of thirty-four letters written by a Private John Miller of Company F, that might have provided additional insight into the history experienced by my own ancestor. The letters are transcribed on this same website. This is particularly true since my original record showed my ancestor served in Company E and the letter writer served in Company F.

Back to the FamilySearch.org Research Wiki, I find a list of the Companies and links to each Company's roster. Here is where the real research begins. I find that the published roster for Company E of the 123rd Infantry does not contain the name of my ancestor. There is a John Morgan but he is John F. Morgan and my ancestor is John H. Morgan. Also the place of muster is not the same as listed on the first record from Utah shown above. Here is a screenshot of the muster record: 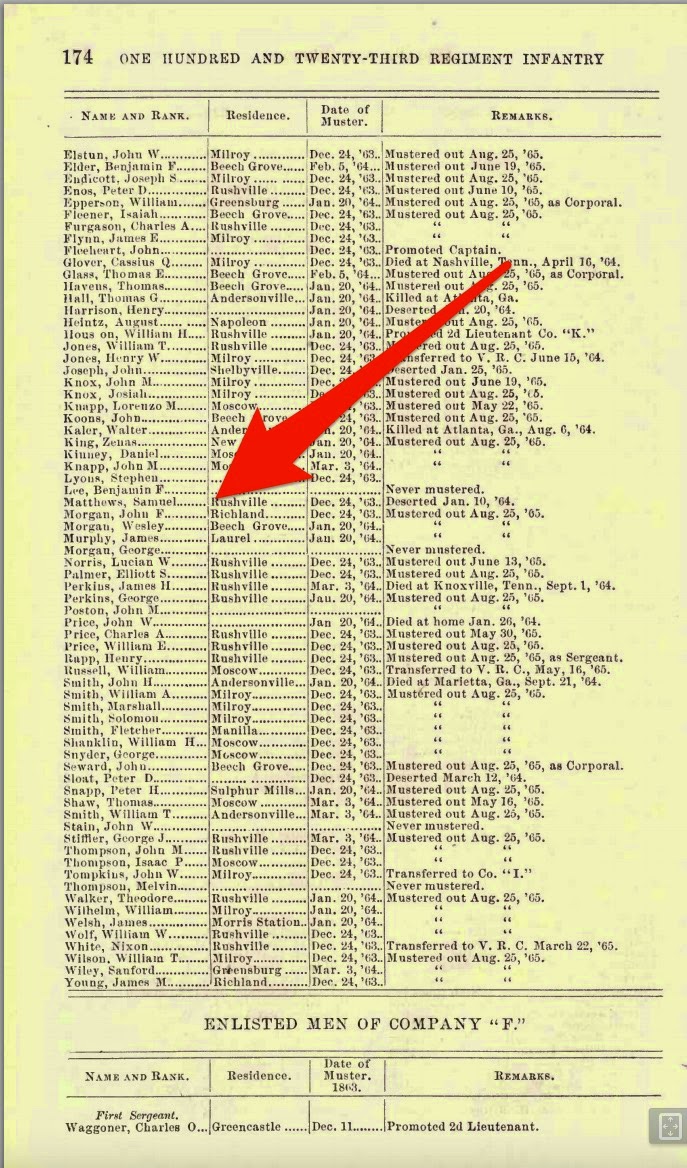 Well, back to the drawing board. I have some nice Civil War background information about an Indiana Regiment, but it turns out to be the wrong one for my particular John Morgan ancestor.

So much for the reliability of the form letter sent out in Utah. Fortunately, my own ancestor shows up in Wikipedia. I do a simple Google Search for "John Hamilton Morgan" Civil War Record and find the Wikipedia article. The confusion of the Utah record is cleared up when I find that he served in the 123rd Illinois Volunteer Infantry Regiment not Indiana. Back to the FamilySearch.org Research Wiki and I find links to further records. I go to the National Park Service website for The Civil War. With the correct unit information, I find his listing: 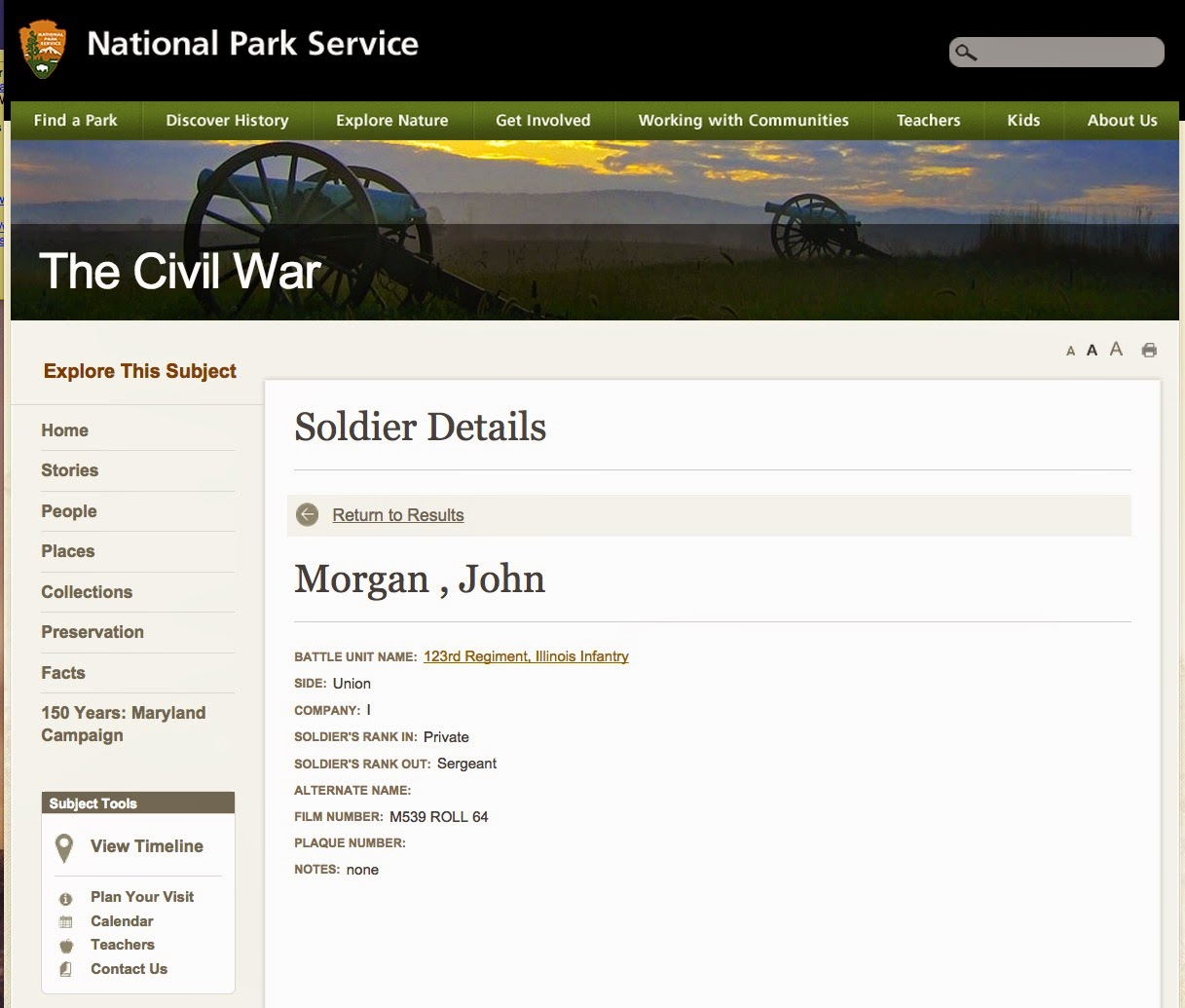 I also find a summary of the unit's history:

Regiment lost during service 3 Officers and 82 Enlisted men killed and mortally wounded and 1 Officer and 133 Enlisted men by disease. Total 219.

I now have a huge amount of information as the basis for further research on each of these battles. Of course, from my own ancestors, I have led you on a wild goose chase for the purpose of showing some of the records that may be available. In my case, I have a biography of John Morgan, that relates some of his military history. The book is as follows:

Richardson, Arthur M., and Nicholas G. Morgan. The Life and Ministry of John Morgan: For a Wise and Glorious Purpose. [Place of publication not identified]: N.G. Morgan, 1965.

John Morgan did indeed serve during almost the entire Civil War. But, in this case, as in all others involving military records, you must be absolutely sure you are following the right person. As a closing, I might suggest the Cornell University Library, Making of America, Civil War documents. I might also suggest the following book that contains an extensive listing of sources for John Morgan: