The End and Beginning of an Odyssey: The Publication of the Mesa City Cemetery Records 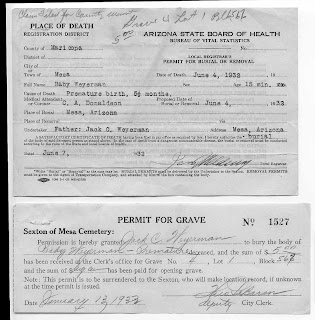 On 8 March 2013, FamilySearch.org published the Arizona, Maricopa, Mesa City Cemetery Records, 1885-1960. This publication culminated a two and half year odyssey that began with the tragic death of my 11 year old grand-daughter, Allison Bowers. During the preparation for her burial in late October, 2010, I was waiting at the small office building of the Mesa City Cemetery and noticed some very old cemetery records displayed in a glass case. I inquired about the records and was told that they went back to the 1800s and had never been cataloged or preserved on microfilm. There were, in fact, two file cabinets of the records. Without further thought, I immediately volunteered to digitize the records.

It turns out that these records consisted of Permits for Burial, Tax Rolls, Sexton Ledgers and other burial and funeral records. They often contain the names and burial information of infants and young children who were likely otherwise not recorded in any other records.

I contacted some of my friends at FamilySearch and was directed to the right people in the records acquisition department. I learned of a pilot program partially under development to provide for the digitization of smaller collections of records outside of the normal types of records acquired by the formal volunteers with expensive industrial-type cameras digitizing hundreds of thousands of records at a time. After a meeting at RootsTech in 2011, I negotiated a contract between the City of Mesa and FamilySearch to do the digitizing. This took a great deal of time and patience. Finally, by the end of 2011, we obtained permission from all the concerned parties.

Another challenge with the project was the development of software and digitizing standards for this type of acquisition using a desktop flatbed scanner and a pro-sumer camera. This development process required trips to Arizona by FamilySearch staff and my visits to Utah to coordinate the work and de-bug the programs. I began digitizing the records in November of 2011 and continued with numerous interruptions for software issues and family concerns into 2012.

Digitizing the records was physically tiring and emotionally demanding. Reading about the cause of death of so many people and even young infants and children became a challenge. Space in the Cemetery building was extremely limited and I had to carry in the equipment each time I did some scanning and then remove the equipment at the end of each session.

Over 13,000 images later, the job was finally finished with some help from by wife and my grandson. But then this was only a beginning. This type of record had never been captured in this way before. It took some time to work the images into the existing collections and gain approval of the process and adjustment to the high digitization standards of the FamilySearch acquisition team. All along I received marvelous help and encouragement from the staff at FamilySearch with an unquenchable willingness to surmount any and all problems.

So, now the records are published online in the FamilySearch.org Historical Record Collections. The Permits for Burial are likely a type of record created for every publicly owned cemetery in the United States. But very, very few of these records have as of yet made their way online.

This is only beginning.  In the near future, I hope that we will be working on other records with FamilySearch that we already know about. I have several other people interested in helping gather both cemetery records and other types of records that have missed the digitizing efforts up until now. Thanks to FamilySearch for all their interest and help in preserving these valuable records.
Posted by James Tanner at 7:07 PM