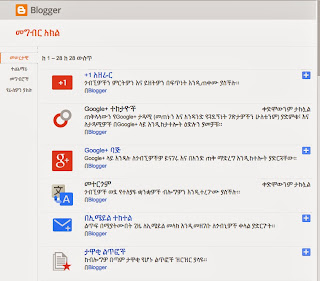 As you can see from the image above, the problem with the display of scripts on my Blogger program continues. I appreciate all of the comments and suggestions that have been made. But after trying a number of options, as suggested by commentators, and after examining the HTML code in detail. I have still not cracked the problem. I have made two requests to Google so far. But my experience with Google help in the past has been extremely poor and I do not really expect any response.

I'm going to outline my analysis so far:

1. The problem only appears in the Blogger program. Any references to items outside of the program appear in normal text. None of the text problems appear in any of the blog posts. The change in the script is confined to menu items. Any user inserted items appear in normal script.

2. The script appears to be a literal transliteration of English. In other words, the symbols are a substitution not a translation. Putting the text into Google Translate shows that the program recognizes the text as English. It is also not a choice of font problem apparently. Changing the fonts with Fonts Changer from Google makes no difference. The problem seems entirely confined to Blogger and no other program. I have examined the settings and preferences that I have available and they all show normal font selection. Changing the font selection has no effect on the problem.

3. I have examined the entire HTML for different pages and all of the references to fonts in the HTML file or the normal fonts specified. All of the menu items function normally except for the labels. Some of the individual labels remain in the normal script.

My analysis is that the problem is embedded in the Google Blogger program itself and I'm not sure that I have access to the level of code where the problem arises. I am wondering if Google should be paying me to solve this problem?

I'm not entirely convinced yet that the problem arises as a result of a specific attack on my blog. But I am not far from that conclusion. I have resolved issues caused by linking to a corrupted URL previously, but this problem does not appear to be related to an embedded link.

I realize that this whole problem is entirely meaningless to anyone not confronted with the same issues, but if I find a solution, the process that I've gone through should be illustrative of how to solve other problems you may encounter online.
Posted by James Tanner at 9:30 AM