What is a genealogical source?

One issue confronting genealogists is the accurate identifying of documents, books and other items as original sources. The challenge is to determine which of all the copies contain the correct information. 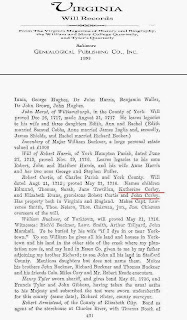 Now there is a very interesting question posed by this hypothetical. What is the legal effect of the changes made to the court's transcription of the original will? Legally, the will should have been probated exactly as it was written, but it is not impossible that provisions of the will could have been modified if the court heard convincing evidence that the document as originally written was defective. The absence of a reference in the court record to the accuracy of the copy or further an explanation of the changes would create a presumption that the changes were done with the knowledge of the court. Otherwise, the heirs would have detected the fact that the court copy, on which the disposition of the estate was based, was faulty. So which is the "original?" The only thing that can be concluded, assuming that a further search of the court record discloses no mention of a problem with the transcription, is that the original document was modified by the courts ruling. The court record is the "original." The original copy of the will should be ignored.

As a genealogist what would you think? I would guess that 9 times out of 10, the researcher would find the original will and consider that to be superior to any copy, even that of the court. What if the information in the so-called original will (the one presented to the court) mis-identified the heirs and that the evidence in the court correctly identified them and the court's copy was changed to conform to the facts as presented to the court under oath?

You can see from this hypothetical that the issue of an "original source" can be difficult to resolve. In the years I used as an example, copying a legal document, such as a will, into the court or town record was not unusual. Finding the original will document written by the deceased or under his or her direction would be very much less common although not impossible. If the researcher in the hypothetical were reversed, it is possible that the unreliable will could be found before the more reliable court transcript. But how many researchers would automatically accept the "original" will as correct over the copy. Especially since we all know how unreliable copies can be?

The answer to this question goes to the heart of issue over the definition of an original. Fast forwarding to today, it is no longer something we discuss in court. Copies of original documents are acceptable in court for all purposes and producing the original document is seldom necessary except in very limited circumstances such as when there is a dispute about the execution of the document itself rather than its contents. But of course, we are talking about photocopies today and back then, the copies would have all been transcriptions done by hand. But what I am positing here is a situation where the copy is unreliable, but the only evidence we have of its unreliability is the suspect transcript. Aren't we going to believe the original? I have already said that we are going to do exactly that.

Back to the hypothetical. In this case the second researcher is a stickler for accuracy. He examines the original will and notices the discrepancies. He then puts the entire document and the copies into a suspect category and does more research. His subsequent research validates the copy found in the court record and the researcher's distrust of the original will is also validated.

There are too many situations where something similar could have happened. No one source document should be accepted on its face unless other circumstances surrounding the creation of the document substantiate the contents. Don't believe all that you read and don't believe anything just because it is in print or reproduced digitally. Genealogists should always assume that the facts as supported by documentary evidence are entirely tentative. Every "fact" in our genealogical database is suspect awaiting further evidence.

Some researchers find living in an environment of doubt very disturbing. They cannot accept the fact that the names, dates, places and events in their files are subject to change. But change is inherent in the process of research. A researcher continually adjusts any theories to conform to newly discovered evidence. Unfortunately, a huge portion of the genealogical community blindly accept the first evidence they find and are confused and defensive when further evidence raises contradictions. This issue can be raised by something as simple as alternate spellings of a name in the U.S. Census records or as complicated as the example I gave above. As Ralph Waldo Emerson wrote, "A foolish consistency is the hobgoblin of little minds, adored by little statesmen and philosophers and divines." I would also add adored by genealogists.

How do we then survive in an atmosphere permeated with doubt? It does make life difficult, I admit. The important thing is to view evidence objectively and not become married to your evidence. This attitude does not extend to basic beliefs about life. But as René Descartes is reported to have said, "If you would be a real seeker after truth, it is necessary that at least once in your life you doubt, as far as possible, all things." Descartes also said, "When it is not in our power to determine what is true, we ought to follow what is most probable."  One last Descartes quote, "Doubt is the origin of wisdom."