Some of the questions I have been asked lately at the Mesa FamilySearch Center reminded me of the issue of the differences between cultural kinship systems. Our perspective as genealogists in a pervasive Western European environment almost forces us to exist within the rigid structure of the "standard" pedigree and/or fan chart environment. 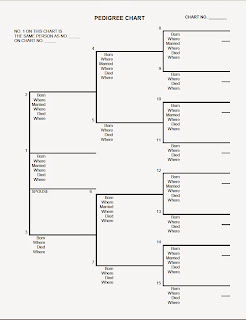 What is seldom discussed and even less often realized is that this "standard" chart fails to represent the "real" relationships between family members are even worse, obscures those relationships. I have discussed this issue somewhat before, but the recent questions directly raised these issues. Let me list some of the relationships in our own U.S. based culture that are obscured by this type of approach:

We sometimes lump all of the "outside the pedigree" relatives into a category of "unrelated." Does that convenient category answer the questions raised? For example, if you had a daughter that got married, had a child and then got divorced, do you have any relationship to your grandchild/s other grandparents through his or her father? 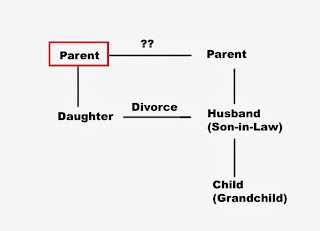 We face this situation all the time with totally inadequate tools to handle all of the various relationships in a way that accounts for what really happened. Focusing on a strictly biological pedigree relationship may make this situation impossible to understand. What if the grandparent with custody was the mother of the son-in-law and she did not have the same married name as her son and the child changed his or her name to the that of the grandparents who raised the child?

A kinship systems in anthropology is defined as the system of social relationships that constitute kinship in a particular culture, including the terminology that is used and the reciprocal obligations that are entailed. Here is a more expansive definition from Answers.com citing the Britannica Concise Encyclopedia:


System of social organization between people who are or are held to be biologically related or who are given the status of relatives by marriage, adoption, or other ritual. Kinship is the broad term for all the relationships that people are born into or create later in life that are considered binding in the eyes of society. Every person belongs to a family of orientation (e.g., mother, father, brothers, and sisters), and many adults also belong to a family of procreation (which includes a spouse or spouses and children). Familial bonds of descent and marriage may be traced through a genealogy, a written or oral statement of the names of individuals and their kin relations to one another. Inheritance and succession (the transmission of power and position in society) usually follow kinship lines.
Read more: http://www.answers.com/topic/kinship#ixzz2nGpbOw23

As genealogists, even in families where the complex challenges I outline above do not occur, we have a very difficult time representing those relationships because the limitations of our standard tools.

If we are to "internationalize" genealogy and further, if we are to really document all of the possible circumstances that occur in various cultures across the world, I suggest we need to start thinking about how we are going to do this in a way that preserves and does not obscure all of these relationships.
Posted by James Tanner at 7:37 AM