Died in the House -- a useful tool?

Thomas Milton Tinney, Sr. made a comment to one of my recent posts and suggested an interesting website, Died In House – Has Someone Died in Your House? Is this a new tool for genealogical research? Thomas' comment was as follows:

It is not promoted as a genealogy tool; however, it seems to me that anyone having any residential location in the United States, could clearly benefit, by obtaining a home history; relatives and occupants. The Died in House service is the first of its kind; it provides users with death records associated to a specific address. This seems to have tremendous potential, for the genealogy and family history community, especially for close knit neighborhoods, considering data obtained from obituary notices and death certificates.

Subsequently, Tony Proctor made the following comment about the UK:

I'd like to suggest a generalisation of this topic James. There is a homes-based collaborative site in UK too called MyHomesPast.

Tony also explains his thoughts about the program in another Google+ post:

MyHomesPast is a collaborative site allowing people to create a pictorial history of the homes they've lived in, including details of former residents and timelines for the properties. This is one of the forms of local history that I mentioned as falling outside of traditional genealogy but having a strong overlap with it - hence my use of the preferred term micro-history. The site was only launched in 2012 and so has a few teething troubles, such as requiring a mandatory postal code. This automatically eliminates many of the properties that were demolished during the slum clearance projects of the 1960-70's in England, and leaves people like myself unable to use it. Still, this is the way things are going and I hope the site succeeds.

This is an interesting avenue of research, but here in Arizona there are some strange obstacles to this type of endeavor. It is currently impermissible for real estate sales people to mention that anyone died in a house to a potential purchaser. In Arizona you are not required to disclose if your home has been the site of a natural death, suicide, homicide or any other crime classified as a felony. So even if the above websites became viable options, where are they going to get their basic information?

I have been heavily involved in Arizona real estate law and actually had a real estate license for a while and I cannot think of anyway I could find out whether or not someone had died in a house here in Arizona other than by chance. Here is a copy of my Great-grandfather's death certificate. He fell and was injured at his daughter's house in Gilbert, Maricopa, Arizona on 13 March 1935 and died on 21 March 1935. Look carefully and see if you can find the address or the location of where he died? 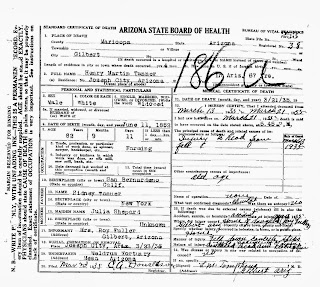 Guess what? There is nothing on this death certificate giving the address of either the site of the accident or the place where he died. Of course, this may be entirely different in states other than Arizona, but I am sure that the home occupied by his daughter in 1935 is very likely still being used. Did he die at home or in a hospital? By the way the death certificate says "If death occurred in a hospital or institution give its NAME instead of street number." Neither of these is present on this death certificate.

Just a thought.
Posted by James Tanner at 7:39 AM