Thanks to a tip from John Reid in his Canada's Anglo-Celtic Connections blog, sending me to the Northern Ireland Placenames website. Here is a screenshot of the new website's startup page: 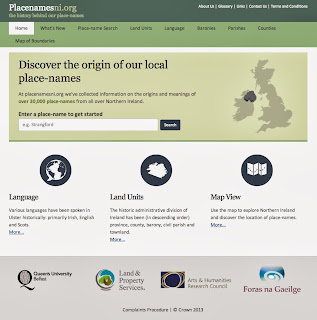 The website was developed with support from:
With further subventions from the:

This is an obviously valuable resource for anyone doing research in Northern Ireland. Here is a short description of the content taken from the website:

The corpus of Northern Ireland place-names includes historical administrative names (6 counties, 60-plus barony and district names, 269 civil parishes, 9,600 townlands) and at least 20,000 non-administrative names (including the names of rivers, lakes, mountains, and other physical features). This database contains a gazetteer of these names which was compiled by the Northern Ireland Place-Name Project from map and other sources. The gazetteer continues to grow; additions are constantly required as new names are coined in urban landscapes and as traditional names (which have previously been unrecorded) are discovered in the field.

These names originated in a variety of languages: primarily Irish historically (e.g Belfast < Béal Feirste), but with increasing numbers of names in English (Draperstown) and Scots (Glarryford) appearing on record since the Plantation of Ulster in the seventeenth century. There are also names which originated in Old Norse (Strangford) or which indicate contact with, or knowledge of, other languages such as French (Pomeroy). The corpus of historical citations for these names currently stands at approximately 130,000 references in the database; these citations have been abstracted from a wide variety of sources stretching over the best part of two millenia.

Since I have ancestors from Northern Ireland, this website will be of use to me personally.
Posted by James Tanner at 7:16 AM