A Look into Genealogical Source Evaluation: Let's Get Real

When I was very young, we used to have books of trading stamps. There were several varieties, but S and H Green Stamps were the most common. The idea persists today with the bar code cards many people carry around to obtain discounts from various merchants. We dutifully produce our bar code card although we aren't quite sure if we are getting anything in return. The difference with Green Stamps was that you could fill books of stamps and redeem them for actual products in S and H Green Stamp redemption locations or by mail.

Well, I think genealogy, in some cases, has become a game of pasting names into a book to get some, usually only partially defined, benefit such as "connecting with our ancestors" or whatever. Don't get me wrong, there are real, fundamentally important reasons for researching our ancestors, but there is a level of genealogical activity that is more interested in filling in the blank spaces then deriving any real value from what is produced. How do we get away from the Green Stamp approach to genealogy? May I suggest that a significant step will be to begin critically examining the information we acquire.

Unlike the generic nature of the trading stamp, our ancestors are not identical items to be pasted into an album or booklet. The real significance of the research comes at the point when you begin to realize that these were real people with real challenges and some significant problems. This realization only comes when you move beyond the superficial collection stage (aka the U.S. Census stage) and start to view your ancestors in their place in the vast sweep of history. In fact, it might be a good idea to start with your own place in history.

I can certainly work at the collection level in genealogy but I also know when I have moved past being a collector into considering the reality of the people I am researching. I think this change comes when I stop looking at my ancestors as blank spots on a fan chart and start asking questions about how much I know about their lives and their circumstances. Perhaps, we all need to spend more time thinking about our ancestor's lives as real people. I can treat genealogy like a puzzle where I look for pieces that fill in the gaps, or I can think of my ancestors as people who lived and died with all the experiences in between where my job becomes understanding and documenting their story.

How do I know this is an issue? When I am asked by researchers how many sources are needed for each person in their family tree.

I spent most of my life being paid to essentially do research. The underlying motivation of all this research was to prove that my clients were right and another attorney's clients were wrong. Of course, the opposing attorney was trying to prove the exact opposite. Some genealogists treat their research as if they were trying to prove a point and as I have written many time before, they adopt a whole hierarchy of levels of ways to "evaluate" the "evidence" and prove their conclusions. Generally, they also have clients that they are trying to represent. When I first started to get really serious about genealogy, I too thought about representing clients and getting paid for my research. But after a very few experiences in "representing clients" I realized that the concept of advocacy in genealogy defeated the ultimate interests in discovering the past.

Every historical document tells a story. If we get caught up in the legalistic evaluation of documents as primary and secondary, original or derivative, direct or indirect, then we a caught in the paradigm that at some point we are going to prevail and prove that we are right and the rest of the world is wrong. Maybe, we should look at documents as individual stories, some are more reliable than others, but each tells us something about the people we are researching. Maybe we will never know the "full story" but we can gather everything we can and come to our own conclusions. But if we ignore this crucial step of critical evaluation, we are shunted back to the level of collectors filling in empty spaces on a chart.

It was interesting to me that after many years of conducting initial client interviews, I could tell rather quickly whether or not my potential client was telling me the truth. What was interesting, especially early on with criminal cases, was that after representing hundreds of criminal defendants, I only had two that I could remember who actually were telling me the truth and in one of those cases, my client was trying to lie to me. I distinctly remember one civil jury trial where I suddenly realized that my client was lying, the opposing client was lying and the opposing attorney was lying. I felt sorry for the jury.

Let's look at a specific issue genealogical issue from the FamilySearch.org Family Tree for an example of critically examining the documents. Here is an individual I have been researching lately. I used part of this same family as an example in my last post. 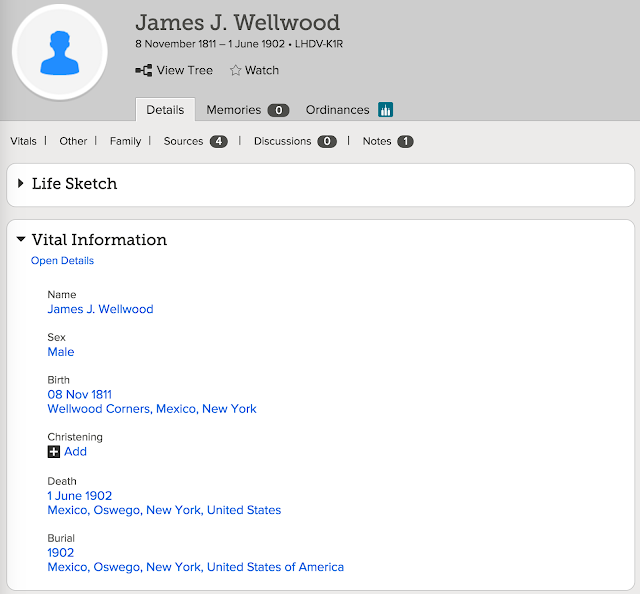 You can see that he was supposed to be born in "Wellwood Corners, Mexico, New York" and an exact date is recorded. Let's look at the sources so far.

All of these sources except the Legacy NFS source were added by me. How do we know when James J. Wellwood was born? Well, the 1900 U.S. Federal Census document says that he was born in December of 1810. The 1850 U.S. Federal Census document indicates he was born about 1813. The FindAGrave.com entry indicates that his birth date is unknown. Lastly, the Legacy new.FamilySearch (NFS) source says that family records give a birth date of 8 November 1811 in Mexico, Oswego, New York. 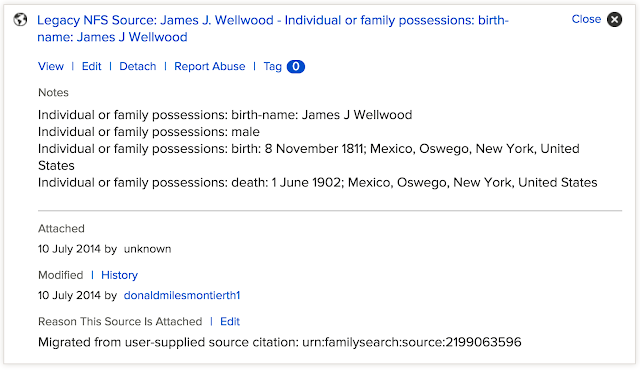 When and where was he born? The real answer at this point is we don't know. Does this matter? Did James J. Wellwood or Welwood really live? Does the fact that the FindAGrave.com website has a photo of his grave marker make any difference? Where do we go from here? Here is what the 1900 U.S. Federal Census has to say. 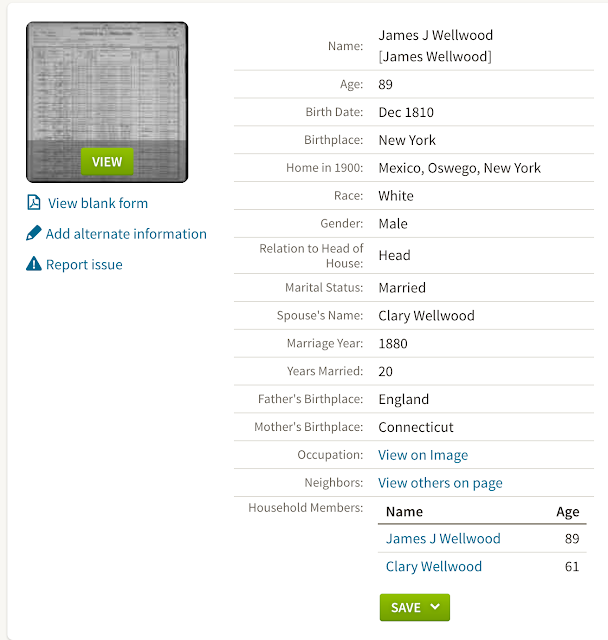 Here is the actual Census record. 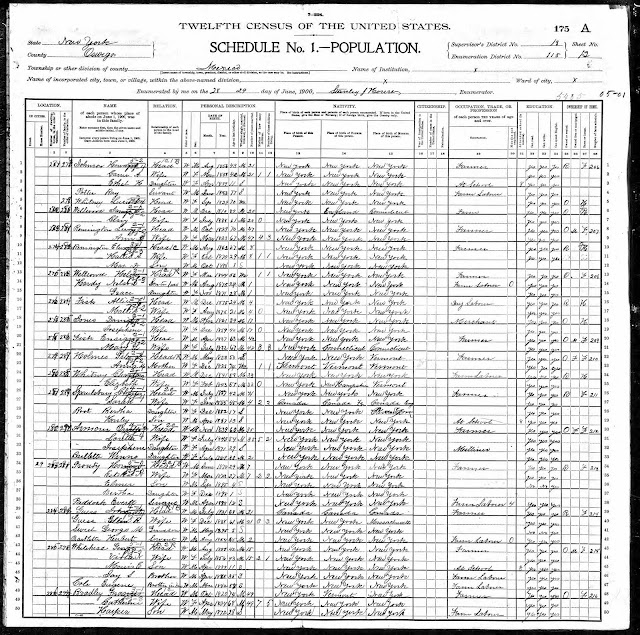 It might help to know that there is a place called Wellwood in New York and that there is note in the FindAGrave.com entry as follows: "Wellwood, also known as South Mexico, was named in honor of James Wellwood who settled there in 1838." From here the plot thickens as they say. Actually, the first Wellwood in the area was likely named John who arrived with his wife Esther Tanner Wellwood in Mexico, New York in 1838 from Rhode Island. The 1900 U.S. Census shows that some one said that James's father was born in England and his mother was born in Connecticut. John Wellwood, James's father is recorded as being born in New York and his mother as being born in Rhode Island.

OK, this is enough to illustrate my point. If I were just copying out the entries from these various "sources" it should be apparent that the family dates and identities would be an unsolvable mess. Somewhere in this mess, there is something reliable, but right now, a lot more research needs to be done. Could we fill in our stamp book with the names and dates we already have? Yes, we could but we are very, very likely wrong about most, if not all of the details and we are still not sure who these people were. Although we may never resolve some of the differences in dates, we can get to the point where we know about this family in a way that makes them distinctive individuals.

Let's get real in our research.
Posted by James Tanner at 7:09 AM