Looking at PAF Reviews -- The Program that Refuses to Die 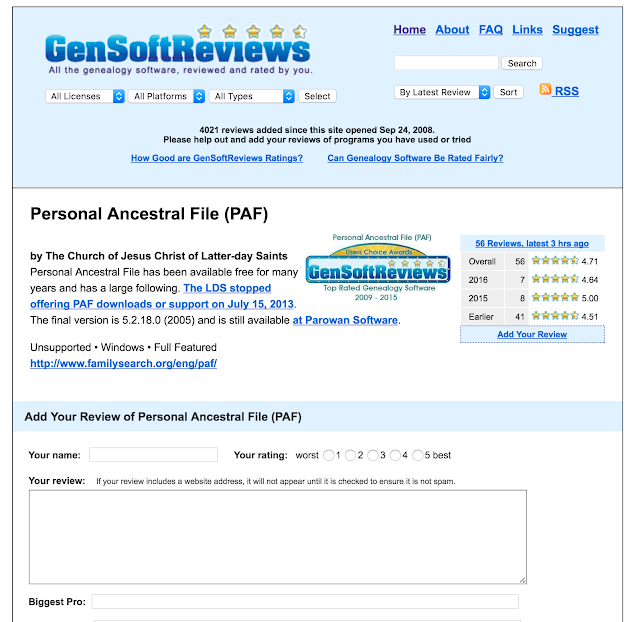 I get an updated list of all the new reviews on GenSoftReviews.com and I was fascinated to see a currenly posted review of the Personal Ancestral File or PAF program. Here is a copy of the notice you can see above in the screenshot:

The program has its own Wikipedia page. See Wikipedia: Personal Ancestral File. I do like old cars and some antique furniture, but I really have no time in my schedule for old computer programs. The PAF programs was first released in 1984 and was written in BASIC and ran only on the DOS operating system. The last revised version of the program was released in 2002 for Windows NT. I think I stopped using the program when the Macintosh version was discontinued in about 1994. Yes, you read all that correctly, this is a 32 year old program that hasn't been updated for 14 years and it still is being reviewed and has a 4.71 overall star rating out of 5.00 possible.

Now, I could conclude from this that since the initial release of PAF software for the program has gone into suspended animation and it only wakes up periodically, sort of like Brigadoon, to dance around for a while and then go back to sleep. But the reality is that the program is still being used by a huge number of people everyday to keep all their genealogical data on whatever computer they happen to have as long as it uses a Windows operating system.

Now, if PAF were the only "free" program out there, perhaps there would be some sort of perverse logic in keeping alive a thirty+ year old program with no current updates. But there are more than a few free genealogy programs available such as the MyHeritage.com Family Tree Builder program and free versions of several other propular programs. By the way, the main reason why PAF has no advanced Internet support is because the features of the Internet and the devices to use those features did not exist when PAF was introduced. For example, the first iPhone was released in 2007, five years after the last PAF update.

What worries me is that some day the program will fail to work on a particular Windows upgrade and a huge amount of user data will be on its way to being lost. Presently, it is getting harder and harder to find the programs and the electronic devices to resurrect PAF data files.

But I do think that the fact that PAF is still being used demonstrates a simple fact: no one has come up with a replacement that convinces the users to pay a few dollars for a better program. I really can't believe that all those PAF users are still driving 14 year old cars and wearing the same clothes and buying the same products they used up to thirty years ago. But for whatever reason, they have not seen a reason to upgrade their software.

The large online genealogy companies have to realize that they are trying to sell their services to people who are using a decades old computer program that cannot even see the Internet.
Posted by James Tanner at 5:00 AM