The Challenges of Adding Sources to Family Trees -- Part One: The Historical Reality 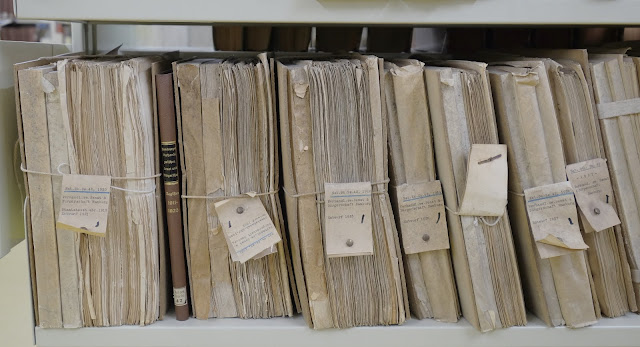 Genealogy is not immune to movements, fashions and fads. Some of these turn out to be beneficial to individual genealogists, others not so much. In the past, a considerable amount of the genealogical effort went into compiling "surname books," the generic term for compiled family histories that either detailed the descendants of a remote ancestor or the ancestors of a more recent person. Many of these books were compiled from "personal information" or undocumented sources. I have at least five of these family history books about branches of my family tree and none of the five cite any significant number of sources. Errors in these publications have proliferated into the current crop of online family tree.

Until quite recently, the concept of documenting the sources of information referred to in compiling a family tree was almost completely missing from in the entire genealogical community. In fact, adding sources was actively discouraged by the paper forms used to record family information. Here is a screenshot of a "family group record" actively used for recording research between about 1940 and the present day which I selected at random from the FamilySearch.org website Historical Record Collections. 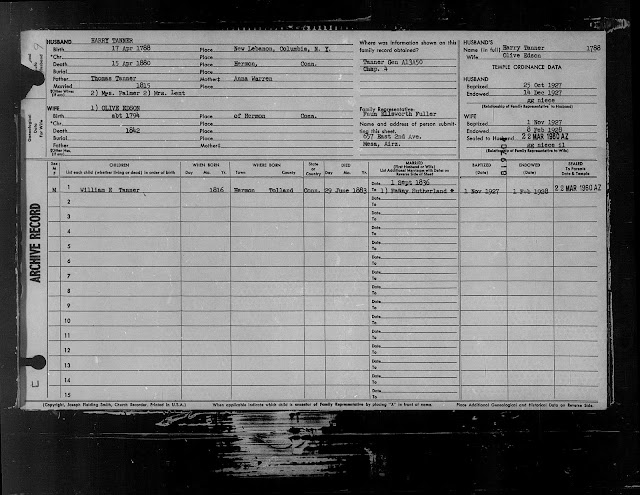 I certainly don't fault the people who were compiling and submitting these forms for their lack of documentation. Here is a close up of the section allowed for source citations. 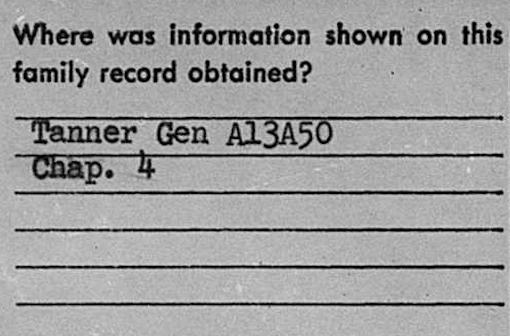 The number for the item identified as a "Tanner Gen" does not appear in the FamilySearch.org Catalog. The number is very likely as modified form of a method of marking the relationships of the people in a book to the beginning or most prominent individual. The point here is that this old, and still commonly used form does not encourage documentation and the documentation that was provided is entirely insufficient to identify the source. Some of the more sophisticated genealogical researchers used the backs of the forms to type in a list of sources; but this rarely happened.

It would be impossible to accurately determine how many of the now-existing, online family trees owe their genesis to these undocumented family group records. As far as I know, the individual shown above, Harry Tanner, is not my relative. There are several unrelated Tanner families in the United States from England and Switzerland. By the way, there are over 2,500 individuals named "Harry Tanner" listed in the FamilySearch.org Family Tree and  incidentally, there is no such place as Hermon, Connecticut where the wife is supposed to have been from. I did find a reference to this same Harry Tanner in an Ancestry.com family tree and the source for the information was listed as the Ancestral File, a compilation of these same family group records.

So the cycle is repeated. The original reference is in an undocumented surname book which is then copied to a family group record and then incorporated in the Ancestral File which is used to add the individual, unchanged, to an online family tree on the Ancestry.com website. 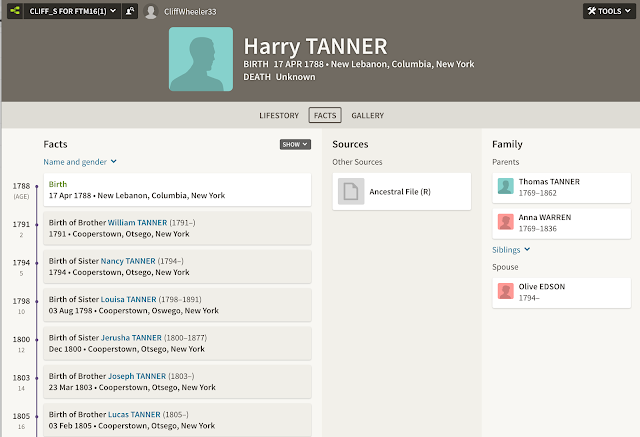 Here is the entry for Harry Tanner from the FamilySearch.org Ancestral File. 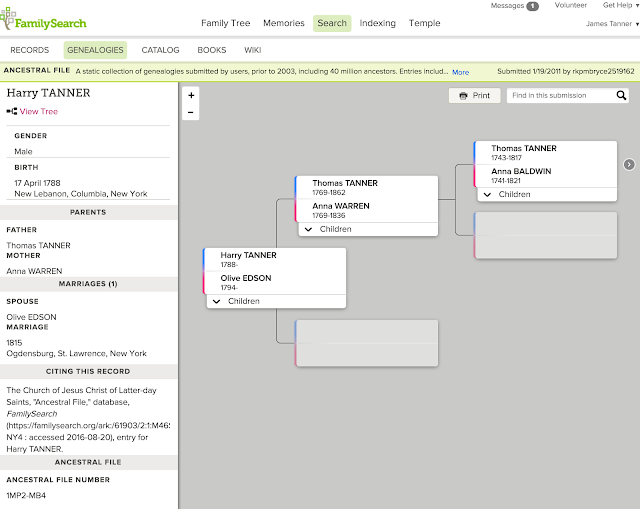 Interestingly, the entry in the Ancestral File gives you a way to cite the reference:

If I were to believe this undocumented entry, I would find that indeed Harry Tanner and I are related as the pedigree shown in the Ancestral File goes back to our common ancestor.  Unfortunately, the entries in the FamilySearch.org Family Tree about this common ancestor are presently duplicative and unsupported. In fact, as it now stands, the descendants of the common ancestor do not include this particular family line. To date, there is no documented connection between the early, colonial Tanner family in Connecticut and my Tanner family in Rhode Island.

This phase of genealogical research in which documentation was almost uniformly lacking is still with with us. As I have noted on many occasions, most of the online family trees are lacking in documentation and as I have demonstrated, the origin of some of the information is highly unreliable.

The idea behind this series is to examine the present cultural attitudes and physical limitations placed on researchers who wish to adequately document their research.
Posted by James Tanner at 6:58 AM