Comments about PAF are not surprising -- Part One 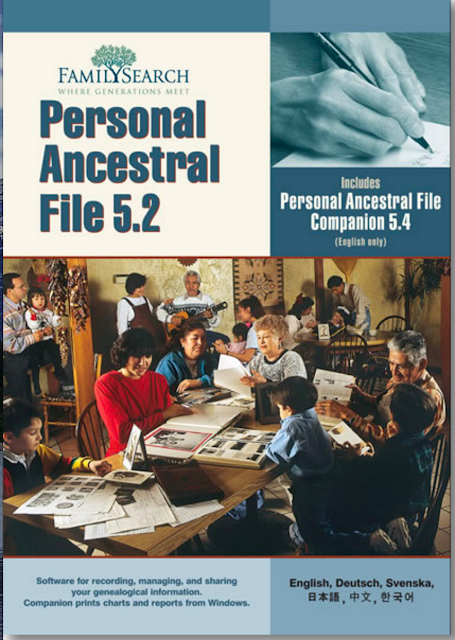 I don't usually respond to comments in subsequent posts, but every so often the commentators raise some interesting questions. In this case, I have already had a number of long comments about my recent post on the Personal Ancestral File (PAF) program the merit a response. First, let me be very clear about my opinion about the program.

In 1984, Personal Ancestral File, was a remarkable and innovative program for creating a personal, genealogical database. GEDCOM support was added in 1986 with version 2.0 for DOS, Apple II and CP/M. There were a number of revisions to the program. The Macintosh version was PAF 2.31 released in 1994 and was never upgraded and so ultimately stopped working on the newer Macintosh computers. The PC version of the program was upgraded from DOS to Win9x/NT in 1999. The last upgrade, to version 5.2 occurred in July of 2002.

The last version of the program supports GEDCOM 5.5.

Quoting from the Wikipedia Article on PAF:


Version 5.2.18.0 began with an adaptation of Incline Software's Ancestral Quest program,[7] written by Gaylon Findlay.[8] Findlay has been involved in updates of PAF.[5] Ancestral Quest has been developed separately, although it retains much of the basic visual layout and file structure of PAF.

I left in the footnote links in case you need more information. Essentially, the updated version of PAF with all of the most recent features is the Ancestral Quest program.  Which is currently available and supported by Incline Software for $29.99, in my opinion a ridiculously low price. I talked to Gaylon Findlay just a short time ago (about a week or so) and he is coming out with some new features in the near future. I will talk about Ancestral Quest when the new feature announcements are made.

That said, in my experience, PAF users can make a rather seamless transition from using PAF to Ancestral Quest. So, the real issue is spending a few bucks on a major upgrade to the "free" program. The reason PAF was "free" was that it was subsidized and supported by The Church of Jesus Christ of Latter-day Saints. In fact, the boxed program was not free, it was sold for $6.00 through the Church's distribution network. The "free" copies of the program were available only as a download when the Internet finally became available as a medium for distributing software.

PAF became the "de facto" standard for genealogy programs, a fact that I have always lamented. From a genealogical standpoint, the program has some serious problems and limitations. Although, at the time, it was among the best programs available given the limited storage capacity of the existing computer systems and the limitations imposed by the operating systems. Managing a large genealogy file on PAF is a nightmare. On the old computer systems, running a duplicate check, for example, was time consuming.

OK, let me get down to brass tacks. I have spent a major amount of my time during the past 13 years "supporting" PAF users. When statements are made that the program is so simple that people do not need support, that is simply a fantasy. Most of the Family History Centers in existence at the time ran endless series of classes on the program. My experience in teaching those series of classes for years was that most of the users had no idea how to use the program without extensive instruction. Of course, after years and years of use, they know something about the program, but they are still coming to me and many others for "support."

Fast forward to the present. We are now dealing with the FamilySearch.org Family Tree. I am now getting a constant stream of complaints about the problems with the data in the Family Tree. I will show what I mean in a subsequent post, but for now it is sufficient to say that a huge number of the problems associated with the Family Tree database originate with the limitations and quirks of the PAF program. The program will continue to haunt us as long as there are people who do not recognize that the continued use of PAF is problem not a solution to any problem.

Don't get me started again on GEDCOM.

Stay tuned.
Posted by James Tanner at 7:45 AM