Looking back to the origins of Genealogy's Star 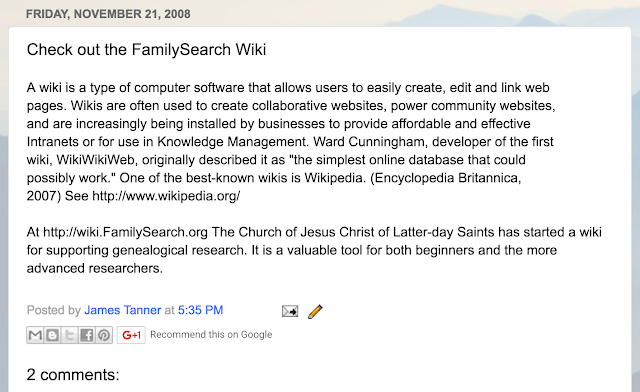 Since that small beginning, I have written and published 4468 posts and have kept writing now for almost eight years. When I wrote that first short blog post, I had no idea how extensively writing online would affect my life. Genealogically speaking, I have come a long way since that first, very tentative, offering.

Probably the most interesting part of the whole experience has been meeting so many wonderful people. Of course, if you know me, you realize that if I am not writing, I am probably talking. So one of the spinoffs of the writing experience has been teaching a steady stream of classes and presentations.

As an additional benefit of writing this blog, I have been asked to participate as a blogger at the annual RootsTech conference in Salt Lake City, Utah. Now, that we live in Provo, about an hour south of downtown Salt Lake, it is not quite as much of a production to attend the conference, but it is still a highlight of the year. My participation has turned out to involve the entire week of the conference, starting with the Brigham Young University Family History Technology Workshop on Tuesday and the Innovator Summit on Wednesday. This next year will probably be even more interesting than past years. The past two years, I have concentrated more on writing and meeting than presenting, but I have still had a constant schedule of meetings during all of the conferences and parts.

Just as a side note, you may want to go to RootsTech.org and keep updated on the conference scheduled for February 8 - 11, 2017. Hotel rooms tend to fill up for the conference and it is a good idea to plan way ahead.

Of course, the most dramatic change that has come in part from my involvement in genealogy is our move to Provo and my involvement with the Brigham Young University Family History Library. I have seven additional live, online webinars to present in September, 2016 and the spin off of this constant stream of webinars has been even more far reaching than the blogs. By posting the webinars on Google's YouTube on the BYU Family History Library Channel, I have seen a steady increase in the impact of this more immediate media outlet.

One interesting side effect of moving to Provo was that I almost completely stopped being invited to speak at conferences around the U.S. and Canada. In reality, that turned out to be a benefit, because now, I spend my time writing presentations for video output. But I have been involved in a lot of local conferences, in fact, both my wife and I are teach three classes each this Saturday for the Provo Grandview South Stake here in Provo.

Now another word about the name of this blog. If I had it to do over again, I would probably choose a different name. I was mostly thinking of an analogy to a guiding star or the sense that the term "star" is used by newspapers, particularly in Arizona. But I soon was embarrassed to realize my choice was somewhat presumptuous, but by that time, I was committed with the name and ran with it. Well, here we are, still writing away.

You would think I would run out of topics, but in reality I have long lists of topics to write on that I haven't had time to get to yet. When I run out of things to say, I will let you know.