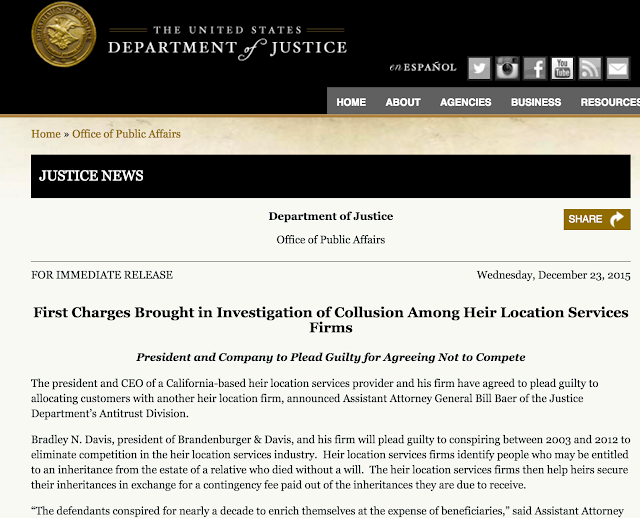 News stories are appearing about a United States, Department of Justice investigation of antitrust violations among heir location firms around the country. The news broke here locally in Utah with the filing of an antitrust case against Salt Lake City based company called Kemp and Associates. See bigstory.ap.org "Utah firm that finds distant heirs accused in antitrust case." Quoting from the U.S. Department of Justice website about the first lawsuits:

“The defendants conspired for nearly a decade to enrich themselves at the expense of beneficiaries,” said Assistant Attorney General Baer. “Heirs of relatives who died without a will deserve better. Working with the FBI and our other law enforcement partners, the Antitrust Division will continue to hold the leaders of companies that corrupt the competitive process accountable for their crimes.”

Brandenburger & Davis has agreed to pay an $890,000 criminal fine for its role in the conspiracy. In a separate plea agreement, Davis and the Antitrust Division have jointly agreed to allow the court to determine an appropriate criminal sentence. In addition, both the company and Davis have agreed to assist the government in its investigation. The charge was filed today in the U.S. District Court of the Northern District of Illinois. The terms of the plea agreements are subject to approval of the court.

An heir location firm generally agrees to attempt to find the unknown heirs of a deceased person for a percentage of the estate should the heirs be located. The Utah article explains the process:


The allegations stem from a Justice Department investigation into anti-competitive practices in the industry in which companies track down distant relations when someone dies without a will or close family.

Workers sift through probate filings in search of recently deceased people who may have missing or unknown heirs.

For competitive reasons, details of the estate are typically withheld until the heir signs a contract with the company.

The firms then use court records, genealogical documents and other public data to help them secure the inheritance in exchange for part of the assets.

The industry defends its practices, saying it has helped heirs secure millions of dollars in inheritances they otherwise would never have known about.

Even though I practiced probate law for many years and represented clients in probate cases, I never had the need to employ one of these companies. The appeal of this type of investigation is in representing very large estates where the recovery would warrant a sizable fee. Those who perform heir investigation services do not have to be attorneys neither are they regulated. Although this type of antitrust action may result in their regulation by the government in the future. This is a rather rare occurrence, when a genealogy-related activity makes the national news.
Posted by James Tanner at 10:26 AM