Expanded Access to Ebooks from the Digital Public Library of America 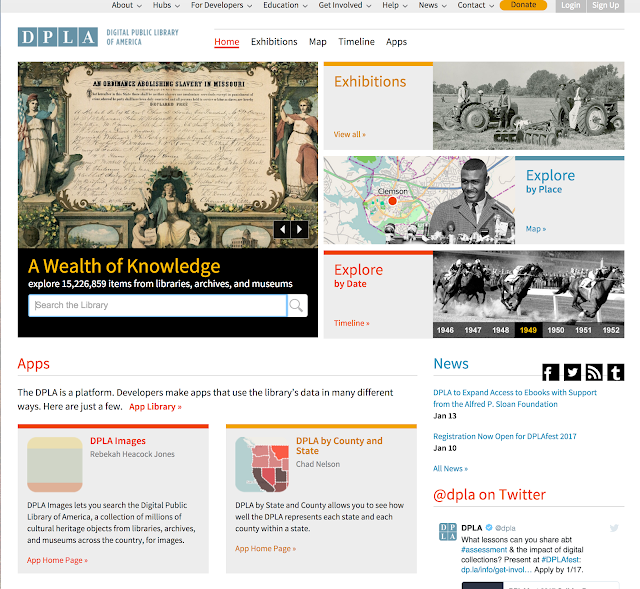 The Digital Public Library of America or DPLA has been awarded $1.5 million to expand its efforts to provide broad access to widely read ebooks across America. Here is a summary of the grant from the announcement:


The Digital Public Library of America is thrilled to announce that the Alfred P. Sloan Foundation has awarded DPLA $1.5 million to greatly expand its efforts to provide broad access to widely read ebooks. The grant will support improved channels for public libraries to bolster their ebook collections, and for millions of readers nationwide to access those works easily.

The announcement goes on to explain further:


The Sloan grant will help DPLA build upon its existing successful ebook work, such as in the Open eBooks Initiative, which has provided thousands of popular and award-winning books to children in need. Recently, DPLA announced with its Open eBooks partners the New York Public Library, First Book, Baker & Taylor, and Clever that well over one million books were read through the Sloan-supported program in 2016.

The DPLA's collections of free, online documents and books have now expanded to well over 15 million items available through its list of partners.

Genealogists benefit from this increase in ebook availability because any such increase inevitably adds books of genealogical interest. There is no accurate way to determine the total number of completely digitized and freely available books online, but the number has to be in the tens of millions. The Hathitrust.org website, alone, has 5,733,350 ebooks in the public domain and Archive.org, the Internet Archive, has 10,809,874 ebooks and there are hundreds of other websites with ebook collections.

I have commented previously on the phenomena that very few genealogists do research into these millions of available books even though the records in the books are in some cases the only available source for certain genealogical records.
Posted by James Tanner at 7:35 AM