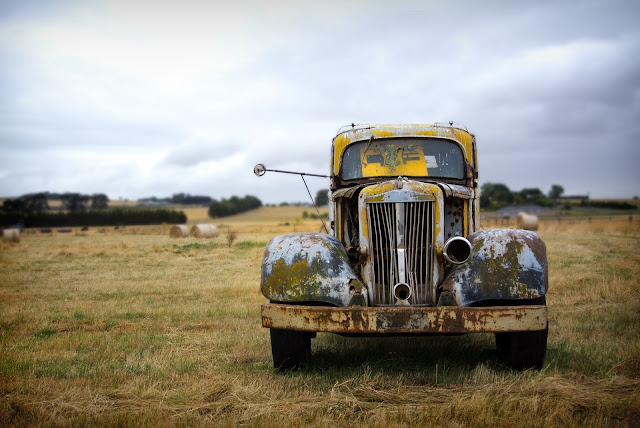 Intel Corporation formally announced its new 7th Gen Intel Core Processors codenamed Kaby Lake at CES 2017 (Consumer Electronics Show). New chipsets mean a new round of computers incorporating the new processing chips. How do I translate all this into something most genealogist can understand? Hmm. I think the old car photo above is a good analogy. When cars are manufactured and new models introduced, they are incrementally upgraded. New cars usually mean new exterior designs, new interiors, and some new gadgets to go along with the car. Some people have to run out and buy a new car every year, but most of us keep our old ones until long after they are completely paid for and start to have operating problems. The reason we can do this is because the main components of automobiles have not really changed all that much in the past thirty of forty years. I could buy that old truck in the photo and with some money and time, refurbish it completely and drive it into the nearest gas station and fill up with gas. In fact, if I looked hard enough, I could probably still buy most of the parts for that truck or even have those parts missing custom made. I could then license the car and drive it around town or anywhere else where cars are allowed to drive.

Can I do the same thing with my old computer? No. Not at all. If I still had an old computer (which I do have sitting downstairs in my basement) I can't rebuild it so it can operate today. I can't even use the same case to build another computer. Why is the computer different than more traditional consumer devices? I could put an entirely new engine in the old truck, but the computer is the engine. Let's suppose that all the new engines available today ran on a fuel other than gasoline and so gasoline, was no longer available. In this hypothetical situation, any older gasoline-based engine would be scrap metal. This is the situation with computers. It is not just that they are outmoded or out-of-fashion, they are scrap metal. The main processor that. is in essence, the computer's engine, i.e. the updated processor, often no longer works with the programs or the operating system.

This changeover when a new processor chipset, such as the Intel Kaby Lake, is introduced does not occur instantly. It may take four or five years for your old computer to become virtually useless. However, computers create their own illusion of utility. They keep running with your existing system and programs indefinitely. Hmm. Then we come to the program upgrades. Let's further suppose that you would like to run a program from the internet or you purchase a new program. Some day, you will suddenly discover that your computer's processor or the amount of memory you have will not allow you to upgrade an existing program or buy a new one. This is just fine if you like living in the dark ages of computing and don't care, but if you are trying to improve your skills and keep up with new ways of doing research, you may start to feel very frustrated.

In my case, I have an entirely different sort of problem. I find that over time my computer system bogs down with all the data, photos, and programs I normally use. My perception is that the computer is running slower and slower. The computer may have seemed amazingly fast when I first purchased it, but over time my expectations increase and the computers become unforgivingly slow. So, I keep buying new ones to get back to where I think they are fast again. This is a cycle that will never really end.

Now I am not advocating that you run out and immediately buy a new computer. But you should be aware that a new Intel chipset is one indication that you might was to look at computer coffin sizes and get ready to bury the old one and move to a new one.
Posted by James Tanner at 1:09 PM