Is Genealogy Public or Private or Both? 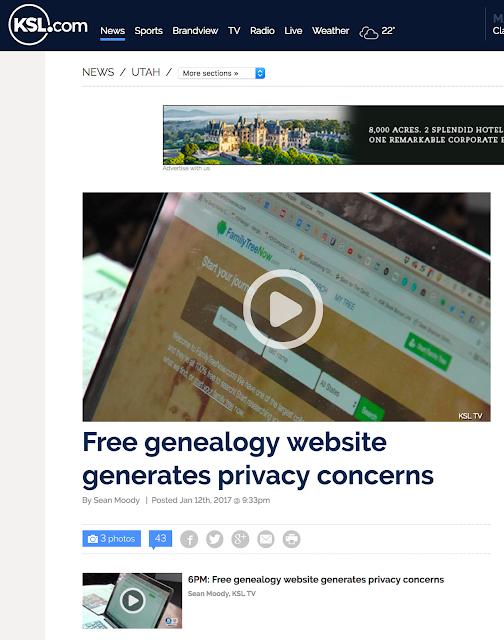 A major article in the Deseret News National Edition for January 29, 2017 and previous articles such as the one shown above from KSL.com with the title of "Free genealogy website generates privacy concerns," continues to circulate through the online community. The much longer January 29, 2017 article in the Deseret News National Edition with the slightly changed, misleading, and inaccurate title of "Free genealogy websites may compromise privacy," is apparently not available online.

I made some comments in a previous post when I received some email questions about earlier articles published nationwide. See "Alert! Is Your Private Information Online?" Despite its misleading and inaccurate title, the Deseret News National Edition article is a fairly good analysis of some of the issues between both the public and private nature of genealogical research. The fact is that you cannot compromise something you do not have. These online websites are simply reporting information that is already generally available on the internet. In the case of the particular website called FamilyTreeNow.com, the tie-in to genealogy is merely a promotional gimmick. The website identifies the developers as follows:


Our mission is to create the best free genealogy site in the world. We want it to be super easy to use for new users yet powerful for experienced genealogists. We're working really hard to improve the site and add great new features. If you have any suggestions please let us know your thoughts so we can improve!

FamilyTreeNow.com was launched in 2014 by some technology veterans who like taking services that typically cost money and making them free so everyone can use them. We have great offices in Roseville, CA where we draw up new features on our giant whiteboard wall and generally try to have a good time while also working really hard.

Family Tree Now, LLC was formed in March of 2015 in Roseville, California. It has one manager. See California Secretary of State Business Search. Its public statement of information is as follows: 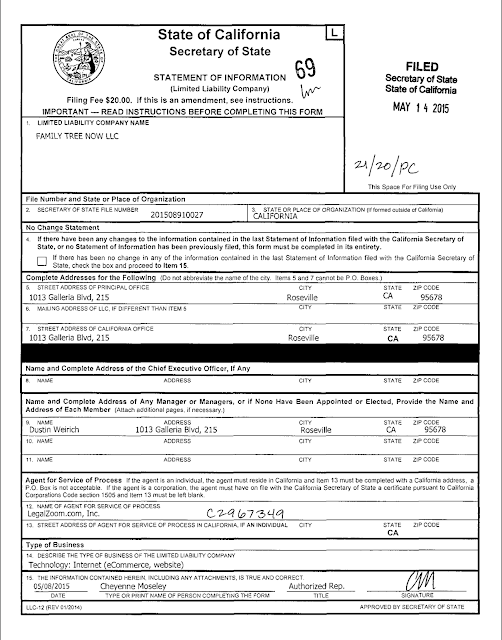 I include this to show how easy it is to find out specific information about just about anything you want to investigate online. The developer of the website was identified in a news article in the Sacramento Bee entitled, "Does this website make it too easy to find someone?" Quoting from this article:


The site apparently is the brainchild of Dustin Weirich, who is listed in California secretary of state records as its manager from a May 2015 filing.

A LinkedIn listing for a Dustin Weirich from the Sacramento area does not mention the site, but says he is the former founder of the Internet dating site DateHookup.com and sold it in 2012 to Match.com. It also lists him as CEO and founder of a firm called Blade Fire Studios that shares the same Roseville address as FamilyTreeNow.com.

The danger here for genealogists is to generalize their concern about privacy and dismiss all online family trees as "dangerous." In fact, this is not a speculative issue, I frequently talk to people whose main reason for not using an online family tree is based on privacy concerns. These privacy concerns arise, in most part, as a result of years of extraordinarily exaggerated claims concerning the incidence of personal identity theft in the United States made by companies that are selling "identity theft protection" schemes. As I have pointed out in many previous posts, the statistics for "identity theft" include complaints for items such as lost and stolen credit cards and do not focus on arrests or convictions.

It seems apparent to me from the information on the FamilyTreeNow website that the site is not a serious genealogy site at all. To test the website, I did a search for my grandfather, as follows: 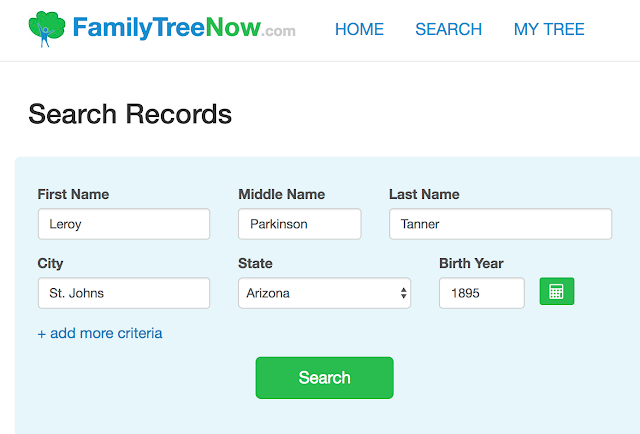 The results of this search were as follows: 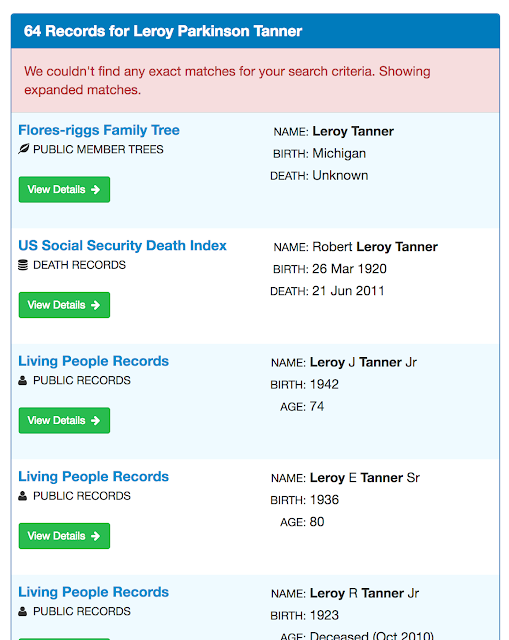 Here is a partial screenshot of the results of a Google search for "Leroy Parkinson Tanner" St. Johns Arizona: 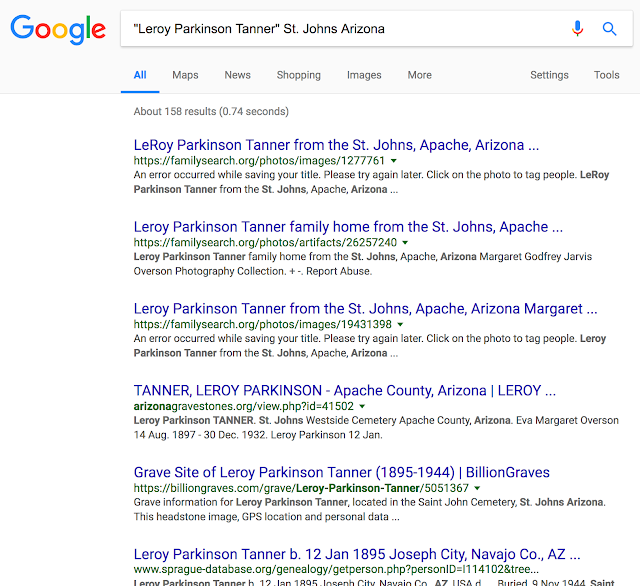 If the website is actually searching the records listed, it would have easily found this name. I would suggest that this site be simply ignored. But I would also suggest that those of you who are somehow bothered by the amount of public record information online, become educated about the issues and legislate for changes.