There was an old woman who lived in a shoe... 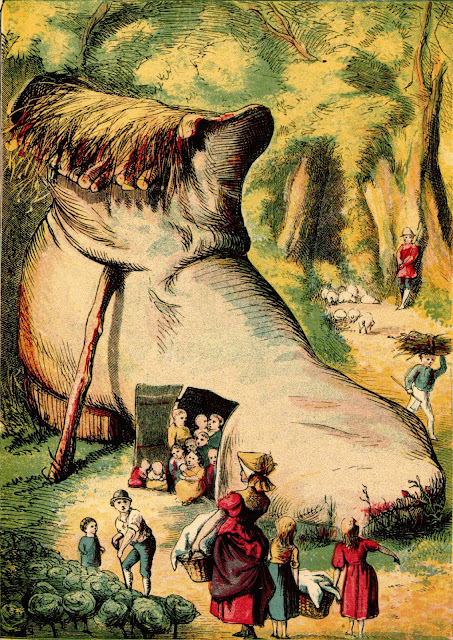 There was an old woman who lived in a shoe.
She had so many children, she didn't know what to do;
She gave them some broth without any bread;
Then whipped them all soundly and put them to bed.

The genealogical significance of this old nursery rhyme should be apparent. I often find family trees with families containing far more children that could reasonably be expected. At this point, I would usually quote some authority or statistic on the most children on record by one mother, but in this case the greatest officially recorded number of children born to one mother is 69, to the wife of Feodor Vassilyev (b. 1707–c.1782), a peasant from Shuya, Russia. In 27 confinements she gave birth to 16 pairs of twins, seven sets of triplets and four sets of quadruplets. See Guinness World Records, Most prolific mother ever.

Citing this fact can only encourage those who add anyone into a family who happens to have parents of the same name and is born in the same hemisphere. However, it must also be noted that independent verification of the number of births is in dispute. See Wikipedia: Feodor Vassilyev. Lest those who are counting the number of children and are doubting also be encouraged.

The number of children shown is not nearly as important as the details about where those children were born. A mother with 69 children (or any other more reasonable number) probably was not going to move around a lot.

When I am evaluating the consistency and accuracy of families I find in online family trees, I always look for the following items:
These and similar question almost always lead to more research on the family. It is also very common to find that some of the children are not part of the family. The number of children listed is not usually viewed as a disconcerting factor.