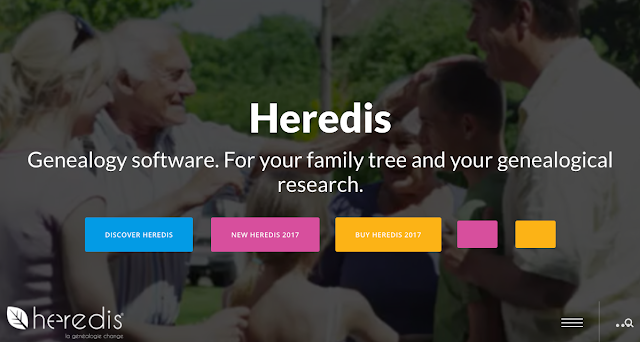 [Note: Apparently, the new version of the program is not yet ready in German as of the date of this post. Check the website for updates on availability.]

The Heredis Genealogy program from France is the most popular software program in Europe. You really do need to take a serious look at Heredis 2017 if you are maintaining a local, computer-based genealogy program. The program is in French, German and English. If you go to the website and find it in French, you might want to translate it into English with Google Translate.

Heredis 2017 has a new and unique dashboard feature. Here is a description of the new feature.


There was a time when genealogists had to make an effort to find out where they had stopped in their genealogy, to find what they had done lately. Or to know which branch they were working on with their current research. Which ancestors had they already found? Which actions did they lack?

Now that time is over. With the Dashboard, at a glance, genealogists know where they are: what they have already found and what they still have to do.

Like a real on board computer, genealogists conduct their genealogical activities very easily. They note their progression: the genealogical and demographic statistics give them valuable indications. Detailed information enables them to analyze their file in depth and to measure the progress of their work, to check the completeness of their sources, to identify what remains to be done and to identify goals. Also, genealogists can customize this workspace by following only the indicators or widgets they have chosen.

The program is extremely feature filled, but at the same time, it is easy to use. Heredis shows an extensive array of relationships on their family tree such as step, adopted and other types of relationships. This feature makes it easy to see blended or extended families.

I have to admit that the Heredis staff struggle a little with the English language in their promotional materials, but the program is entirely in English and is relatively easy to use. There are all the kinds of features that you could want in a genealogy database program. As an important feature, the program runs on both Windows and Mac OS operating systems as well as Android and iOS devices. It also shares its data files over all of these devices. Here are some notes on the versions, pricing, and availability.


For the Windows version: improved font of notes, in immediate family and extended family: display of the county name, improvement of Gedcom ...

For the Mac version: added occupations of spouses in descendant trees ...

AVAILABILITY
Heredis 2017 for Windows and Mac will be available on January 31, 2017 on heredis.com and the App Store.

Here are the system requirements and pricing: