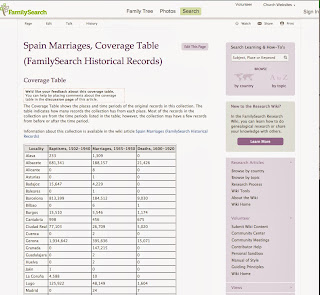 At 17:15 23 September 2013, the FamilySearch Research Wiki officially acquired its 75.000th article. The article is classified as

At one time, when the Research Wiki was growing more rapidly in numbers, I tried to add pages on different topics to see if I could be the one to reach the milestone of some arbitrary number. It turns out to be nearly impossible, because you have no idea who else is working on articles at the same time. I came close but missed the number by a few digits.

Looking beyond the mere number of articles, the Research Wiki has taken its place as the lead in making sense of the huge number of source records, both on the Web and still paper-bound around the world. When I talk about the Research Wiki with newly minted researchers, I get a variety of responses from cold indifference to overjoyed enthusiasm. Those who are enthusiastic are primarily interested in finding out about their families and willing to spend time learning. Those who are indifferent are impatient with finding names and see no use for a resource that has no names. I have huge stack of genealogical reference books, but all together they are only a very small part of the resources set out in the Research Wiki.

Thanks to all those who have contributed over the years and thanks to those who are still contributing. Special thanks to those on the "Support Team" and the FamilySearch volunteers, employees, missionaries and all of the others who have made this phenomenally valuable online resource. Finally, thanks to FamilySearch for allowing this project to grow and become so valuable.
Posted by James Tanner at 9:00 AM