Where Are We Today? -- An Overview of Genealogy -- Part Two

One of the most dramatic increases in genealogical activity seems to be occurring online with social networking sites. Some of the bloggers have seemingly transitioned to making most of their comments and contributing information through Google+ and Facebook. I don't see this as an abandonment of the blog format but merely an augmentation of the already significant growth in Internet activity.

Has genealogical activity on the Internet increased over the past year or years? This is an interesting question to try to answer. In March of 2008, Randy Seaver addresses the issue of Commercial Genealogy Site Statistics in a post. At least one of the websites he used as an example, Footnote.com, has now been acquired by Ancestry.com and become Fold3.com. He also used WorldVitalRecods.com as an example and significantly did not mention MyHeritage.com. Since 2008, MyHeritage.com has grown rapidly and acquired WorldVitalRecods.com. So the online landscape has changed, in some ways significantly, in the past five years.

If we focus on the three big websites, Ancesry.com, findmypast.com and MyHeritage.com/WorldVitalRecords.com, it might be interesting to see if the changes are significant. Randy focused on Daily Reach and Daily Pageviews. Going to Alexa.com, the resource used by Randy, I find that the parameters for comparison available to Randy in 2008 are no longer freely accessible. Now, you have to have a paid subscription. But you can still get most of the same information. I realize that Alexa.com is not always considered the most authoritative source for web information, but it is widely used and quoted. One interesting comparison is as follows: 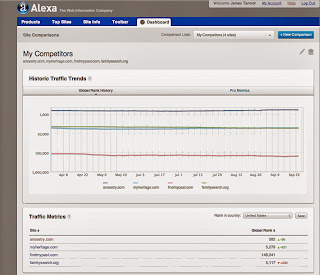 I also added in FamilySearch.org. The relative rankings seem to be about the same as they were back in 2008. Just for interest's sake, I added in the other two websites cited by Randy back in 2008 and you can see how they rank also: 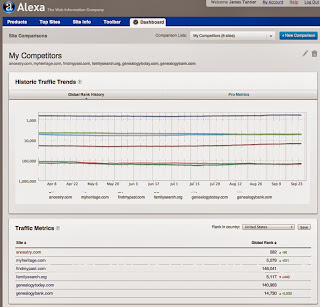 What this means is that, in my opinion, genealogy is holding its own online and may be picking up some steam.

Still to come. Comments on the followinga:
Posted by James Tanner at 2:13 PM