Travels on the Web -- Resources for Genealogists -- Hancock County, Illinois Part One

Establishing the County Creation and Boundary Changes if any

My destination in this post is Hancock County, Illinois. This post is going to have to be in more than one part because to look for county records requires some preparation. In this post, I will cover the basics of looking for Hancock County records. But bear in mind, that the same procedures and methods work for any county in America or any other jurisdiction in the World.

If you look at the map above of Illinois from 1820, you will see that the area near the big bend in the Mississippi River in Northwestern Illinois is marked as Military Bounty Land. Hancock County was not created until 13 January 1825 but it was created from Non-County Area 3 attached to Pike County; Hancock was not fully organized at the time and was attached to Adams County "for county purposes." (Ill. Laws 1824-1825, pp. 85-87, 92-96) See Newberry Atlas of Historical County Boundaries. On 3 August 1829 Hancock County was fully organized and detached from Adams County. (Scofield, 679)

To see graphically how any county in the United States developed, you can refer to the free online program called the Newberry Atlas of Historical County Boundaries. The program shows boundary changes and also has individual chronological lists of all the changes will references to the state statutes and law collections as shown above. Here is a screenshot showing the county boundaries after the 1829 separation from Adams County: 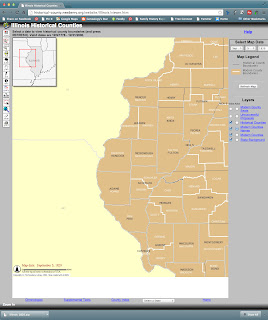 I choose Hancock County, partly due to my own ancestors who lived in the county because of the historical connection with Nauvoo and the pioneer history of The Church of Jesus Christ of Latter-day Saints (Mormon) and partly because I am participating in a Research Retreat there with the Family History Expos on the 17th through 20th of October. From an entirely different standpoint, Hancock County could be considered typical of many counties throughout the U.S. At the very least, as I observed above, the methodology for researching in Hancock County is the same as any other county.

As noted above and shown by the old map, Hancock County was part of the Military Tract of 1812. This huge parcel was designated by Congress to reward volunteers soldiers in the War against the British (War of 1812). The land included in the Military Tract was in Illinois, Arkansas and Michigan. See Wikipedia: Military Tract of 1812. The tract was surveyed in 1815–1816 and opened to settlement. Then warrants for land were issued by the government. Many of these land grants can be found by searching Illinois Public Land Sales in the Illinois State Archives.

The Illinois Public Domain Land Tract Sales Database contains information on the initial sales of public domain lands made in federal land district offices. Sales of federal lands resulted in land patents being issued at a later date by the U.S. General Land Office; patents for lands donated by the federal government to the state (i.e., school, saline, seminary, canal, and other internal improvement lands) were issued by the state. Lands donated to the Illinois Central Railroad never were conveyed by patents; clerks for that company executed deeds for those land sales. Today federal land patent records are maintained by the Bureau of Land Management (Eastern State Office), 7450 Boston Boulevard, Springfield, VA 22153.

Further, the na maintains land sale case files for those sales which resulted in federal land patents being issued. Inquiries for those case files should be addressed to: National Archives, Textual Reference Branch-Land (NWDT1), Washington, D.C., 20408. In writing the National Archives provide that agency the full entry referenced in the Illinois Public Domain Land Tract Sales Database as well as the type of land entry, the name of the land office where the business was conducted, and the final certificate number, all of which are provided by the Bureau of Land Management.

Hancock County was named after John Hancock, who signed the Declaration of Independence. For a short period of time Nauvoo was the most populous city in Illinois. The Mormons were driven out of Missouri by mob action and under an extermination decree by the Governor, and they sought refuge in Illinois beginning in 1839 and were driven out of their homes again in 1846. 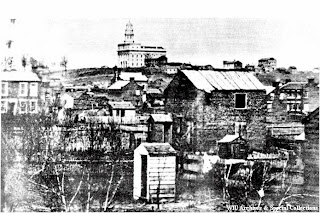 Before searching in depth in any county, it is a good idea to have, at least, a basic understanding of the state and local history. Here is a selections of books about Hancock County: