As genealogists, hopefully, we are aware of the huge online resources for finding cemeteries and gravemarkers. These large online websites include:


and various other state and local lists and resources. Perhaps you have missed one of the most comprehensive online lists of cemeteries available. That is the United States Geological Survey site called the U. S. Board on Geographic Names (USBGN). This site lets you search for existing cemeteries in any state or county in the United States. When available, it will also give you the geographic coordinates of the cemetery, but may only give you a reference to the entity that supplied the information concerning the location.  Here is a screenshot of the startup page: 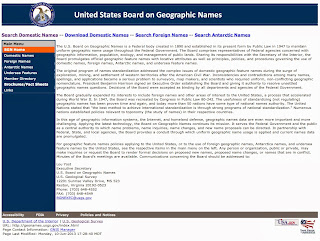 The U.S. Board on Geographic Names is described as follows:


The U.S. Board on Geographic Names is a Federal body created in 1890 and established in its present form by Public Law in 1947 to maintain uniform geographic name usage throughout the Federal Government. The Board comprises representatives of Federal agencies concerned with geographic information, population, ecology, and management of public lands. Sharing its responsibilities with the Secretary of the Interior, the Board promulgates official geographic feature names with locative attributes as well as principles, policies, and procedures governing the use of domestic names, foreign names, Antarctic names, and undersea feature names.

Essentially, these are all of the names, both current and in the past, of all of the geographic features that appear on any topographical map or other types of maps in the world. If you were to do a search for a domestic name (inside the United States) you would see the following screen: 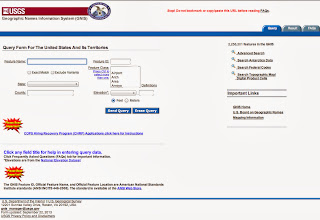 The key here is that no valid features (including cemeteries) are ever removed from the database but they are marked "historical" if they no longer exist. In your search, you can specify the state and county and also the type of feature you are searching. There is a category for cemeteries. A search for the term "cemetery" and by selecting the same category will give a list of potential cemeteries with most of them identified we geographic coordinates. The tip is that when the list comes up from the search, the list may include abandoned or physically lost entries.
Posted by James Tanner at 2:16 PM