A Lack of Provenance

Perhaps the concept of provenance is new to you. Provenance is defined as the place of origin or earliest know history of a historical artifact. This includes photos. I am particularly sensitive to this issue because I was involved, as an attorney, in a significant lawsuit concerning the provenance of an old photograph and a claim of copyright. In copyright cases, proving the provenance of a document or photograph is particularly important. More recently, my daughter and I got involved in a question of the provenance of particular photograph claiming to be of my Great-great-greatgrandfather, John Tanner. Here is a link to the long discussion and analysis that led us to the conclusion that the photo could not have been made during John Tanner's lifetime and therefore could not be him. Here is a copy of the daguerreotype in question: 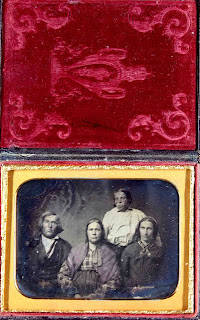 Establishing when and how the daguerreotype could have been taken was a fundamental issue in the determination of the identity of the people shown.

All three of the huge online family tree hosts, Ancestry.com, FamilySearch.org Family Tree and MyHeritage.com encourage their users to upload family photographs. The number of photos on just these three websites number in the millions. It is extremely rare that any of the photos have even a modicum of information about the subjects of the photos much less information about when and where the photo may have been taken. This huge pile of photos is an archivist's nightmare. For example, even though through careful analysis my daughter and I concluded that none of the people in the above photo are John Tanner, there are likely hundreds of copies of this photo out there on the Web claiming that the person on the left is John Tanner. So there are likely hundreds of people, perhaps thousands that now venerate this daguerreotype as a priceless artifact. Well, it is for the descendants of the people shown, but there is little chance that the actual people in the photograph will ever be connected to the right ancestral line.

What use are a million photos without any provenance? How many are misidentified? How many are really duplicates of one another? How many are important photographs of other people either not identified or attributed to the wrong family?

As genealogists we have made some progress in getting sources added to some of our files. But it appears that we have already lost the war, even before it began, with online photos.

What information do we need about a photo? Here is an example of the information attached to an online photo from the Library of Congress concerning the photo of Matthew B. Brady:

OK, so this is a lot of work. But absent at least some of the information, the photograph is an historical orphan without provenance. I realize that there is nothing I can do to stem the tide of uploading millions of more photographs, but imagine the plight of the future genealogists trying to disentangle this mess.