Visualizing Genealogy -- Does the interface make a difference? 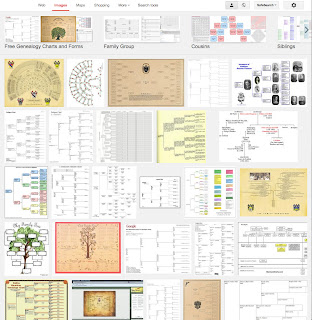 Last April I wrote a post entitled, "Why I am not a fan of fan charts." Just recently, I received the following comment:


I have to say a little something about fan charts. When I started doing research about 3 years ago, I was overwhelmed! I didn't know where to begin, it was very confusing to me. I kept saying to the awesome researchers who were helping me that I needed a "map"! Something to tell me where I was, where I was going and where I had been! After months of saying this to them, and a difficult year of discouragement...I finally laid eyes on a fan chart!!! I couldn't believe how much it made sense to me! I have dyslexia. I get lost when I turn the page. A fan chart is one page!! It saved me! I had a map! I finally could tell where people belonged....it's the only way I can tell if research is right, because I know who they are talking about. Before the fan chart I couldn't tell where in my tree I was. Chronology is miserable for my disorder! I prayed for a way to be capable of research...voila!..fan chart!:) Ironically I read your article because I googled fan charts so I could buy another "map" to do my husband's side of the family:) A fan chart isn't the destination, it's how you know where you're going:)

Frequently comments are thought provoking and sometimes critical or give an opposing view. From time to time, when a reply to a comment cannot be either simple or short, I use a subsequent blog post to respond to a comment or answer a question. As I said in the previous post, "I tolerate these printed charts but I am not a fan. I certainly do not wish to offend any of these people, nor do I wish to dissuade anyone from making a chart of their family. If it works for you, do it."

What I did not mention in my previous article was the fact that there are many types of charts that represent the human family tree. No one of those methods of visualization is perfect, all of them are a compromise with reality. The human family can take a huge number of different forms and none of the existing charting options are really adequate to reflect those variations. All of them have the goal, to a greater or lesser extent of presenting those varied relationships in a way that is supposed to help the viewer to relate to the families.

The point made in my earlier post can be expanded to apply to all such representations. For example, some of my ancestors had multiple marriages with offspring. No one two-dimensional chart, no matter how elaborate, can adequately show the relationships between the step-children in those families. There is no question that these underlying variations in family structure are obscured and somewhat ignored by the huge selection of chart formats. In every case where there are multiple marriages and other types of relationships, the charts rely on alternative pages to show those relationships. I sympathize with the commentator above because I have my own challenges and limitations. But the fundamental question still arises as to how the chart format influences and "guides" our way of thinking about our family.

I can illustrate this issue by elaborating on the situation found in one of my ancestral families. Only recently was the gravemarker for my Great-grandfather John Morgan modified to include all three of his wives. Here is a photo of the marker as it was modified: 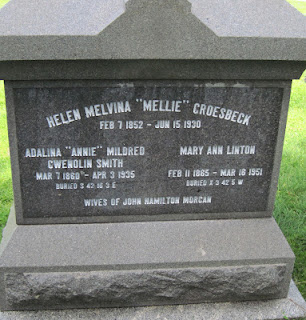 I am a descendant of the third wife, Mary Ann Linton. This project was started as a result of an observation by one of my relatives in a blog post entitled, "John Hamilton Morgan gravestone, October 2010." Basically, this project could only have happened long after John Morgan's death due to the prejudice engendered by the anti-polygamy movement that began in the mid-1800s. The simple question to ask in this situation is how does a chart show that the three wives of John Morgan were contemporaneous and not serial? How does a two-dimensional chart show the difference graphically and not by simply listing the wives and the dates, usually on a separately drawn chart?

Please do not misunderstand what I am saying. Charts have their place and use. As illustrated by the comment at the beginning of this post, they can overcome individual problems in visualizing the complicated relationships we deal with in genealogical research. But there is downside to the benefits of a graphic representation: important relationships may be obscured. My earlier comments were directed at the issue that fan charts, in particular, may lead researchers to focus on the missing people at the expense of verifying that the other people on the chart have been accurately represented. Should a chart be able to show the difference between a family where there were multiple wives at the same time as opposed to wives (or husbands) married one after another? Perhaps the common response would be, I'm not related to those other people, why should I care?

The answer to this question is seldom satisfying to most researchers. I am definitely in the camp of those who believe that families, no matter how complexly constituted, should be viewed as a whole. Not just a restricted view of "direct line" ancestors. Sometimes, information about preceding generations is only available from one member of a complex family unit. Failure to research the entire family may be the reason for the inability to find the next generation.