But they don't know the territory! 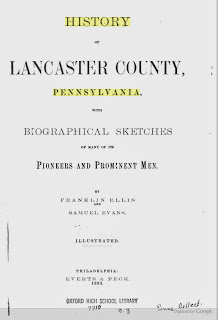 I realize that I am paraphrasing the Meredith Wilson musical, The Music Man, but the refrain that is lost on Harold Hill also seems lost on many of the genealogical researchers I encounter. They simply don't know anything about the territory they are researching. They seldom know when states became states and counties became counties. They are almost entirely ignorant of national, regional or even local history. Not knowing the territory presented some amusing problems for Professor Harold Hill, but that same lack of knowledge can become an insurmountable obstacle to finding an ancestor.

I find, almost without exception, that researchers, both old and new, are looking for people. Perhaps this a good thing since we are in the business of finding people. But before we find the people, we need to find the locations. Research should start with a person who has an event that can be tied to a specific location. Too many times, researchers start looking for an ancestor by name without knowing any specific location associated with the ancestor. How do you know you are looking in the right place? Genealogical records are normally created in the jurisdiction where the event occurred at the time of the event. But simply knowing the location of an event might not be enough. You may also need to understand the jurisdictions involved at the the time of the event and even more, you might need to know the history.


The existing 6000 slaves in Pennsylvania remained slaves, and the registered children of those slaves were slaves until their 28th birthday. The last slave child registered in Pennsylvania was Haley, born in 1811, and a freedman no later than 1839. Thus Pennsylvania was legally a free state when the Fugitive Slave Law of 1850 was passed as part of the Compromise of 1850.

There just might be some other facts about the county you would like to know that affect the location of records concerning your ancestor. Its not like there are no histories for Lancaster County. A quick Google Book search has 241,000 results. There is no lack of histories to consult.