The difference between merging, combining and deleting on FamilySearch Family Tree

In all the discussion online about FamilySearch.org and its Family Tree program, I have noted a significant amount of confusion about the terms merging, combining and deleting individuals. This post is intended to point out the significant differences between the effects of those three actions.

First, I will talk about combining. In the now old New.FamilySearch.org program combining was the action taken when duplicate individuals were found. Many of the duplicates were already combined when the program was introduced. Combining records for two different individuals who were (or perhaps were not) the same individual, resulted in a combined individuals page such as this screenshot shows: 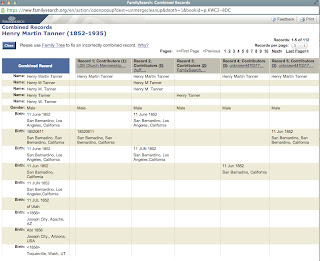 Originally, if the records were incorrectly combined, you could "uncombine" or separate the records. The entire process of combining records in New.FamilySearch.org has been disabled. At the present time, there is a substantial backlog of records that need to be uncombined but all such actions have to be done by FamilySearch and not by the user. Some individuals had hundreds of combined records.

The second process is not available in New.FamilySearch.org, but is reserved to FamilySearch Family Tree, that is, merging two records. A complete explanation of the merge function is found beginning on page 141 of the Family Tree Reference Manual (LDS) and page 137 of the general Reference Guide for all users. There is also a significant discussion of the merging process and the deletion process in a FamilySearch Blog post entitled "Common Mistakes Often Made With Family Tree Data."

When two records are determined to be the same person and merged, only one of the records survives in the database. However, there is a process to unmerge two records. In the old combining records in New.FamilySearch.org, the results were individuals showing up to 100s of combined records. Unfortunately, there is a limit to the number of combined records, leaving many records that cannot be combined and as long as Family Tree is connected to New.FamilySearch.org, there is no way to merge some of the records in Family Tree.

Deleting a record is just exactly like it sounds. The record is no longer shown in the database, but also the record will not appear again, unless someone uses the same name for an entirely different record. As the FamilySearch Blog points out:


If a person existed, he or she needs to have a record in Family Tree. When a person’s record is deleted but he or she really did live, then valuable information regarding that person, such as sources, photos, stories, discussions, and other information, is no longer visible in Family Tree.

Special care needs to be taken to avoid mistakes. People can be undeleted but it is much better to avoid the process in the first place.
Posted by James Tanner at 3:16 PM