Where are we today? -- An Overview of Genealogy -- Part Four 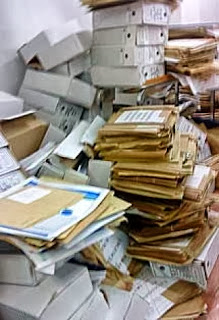 The most dramatic technological impact on genealogical research has been the rather complicated process of digitizing records and providing them online either free or for subscription. A byproduct of this process has been the monetization of those same records. Access to records, public or private, has always been an issue for researchers whether they were genealogists or had other interests. The classic image of piles of boxes stored in a basement is not far from the way many records have been maintained over the years. The numbers of records available online is steadily increasing with both local and national digitizing efforts going on day and night around the world. Increased communications methods and new computer-based devices add to the ability of researchers to view the records almost anytime in anyplace.

I view the availability of records as the driving force underlying all of the other changes to the genealogical community. Without computers and the Internet, genealogy would be in essentially the same condition it has been for the past 200 years. With those tools, genealogical research has become a pursuit open to anyone who owns a computer with a network connection. Notwithstanding the number of records that remain undigitized, there is a corpus of records already available that creates an immense opportunity for many to connect with their ancestors in a way never previously available.

The tide has already turned and there is no stopping the digitization of records. Eventually, so many records will become available, that even more obscure and local records will get sucked into the black hole of record gathering. This is an area where even the best predictions will probably fall way short of the coming reality.

Many people see the monetization of these records as a problem. I see this merely as a natural consequence of the cost of acquisition and maintenance. The advantage of monetization is that scenes, such as the image above with piles of records, will become less likely. As governments and other record keepers come to understand that their records are an asset, there will be a greater incentive to maintain the records in a manner that they can be easily digitized, if the original records are not already being kept in digital files.

As the online records from around the world continue to accumulate at an increasing speed, the concept of genealogical resources will change. The fundamental change will be a democratization of the availability of source records. In the past, researchers, especially academic researchers, have been an elite cadre of highly educated people, separated from the majority by educational opportunities and interests. As the resources for research become readily available to anyone who is even marginally interested, the elite will evolve into an entirely different makeup. Essentially, the elite become those possessing the computer skills first and the research skills second. But the most significant change will be the loss of the need to be academically connected in order to obtain access to the resources.

Much of the world's knowledge and a considerable amount of the genealogical information has been previously maintained in semi-closed cloisters essentially available only to the academic community. Those resources are being liberated from the control of the academics but not without a considerable amount of opposition from those in control. Even the university special collections are slowly being opened up to the general online community, albeit at a much slower rate than other records. This resistance to making the records available can be seen when the academic institutions pitifully claim "copyright" or reproduction rights to the records they maintain in a feeble attempt to prevent the changes I am talking about. The overall pressure to make these records available is irresistible and even the most guarded records will eventually become available to researchers who have long been excluded from their examination.

Another factor in the process of making genealogical records freely available or by subscription is the natural tendency for governments to preserve their state secrets even when the only interest they have in doing so is to protect their own interests from their own constituency. There is a real issue as to whether the whole structure of the Internet and the Web can maintain the free flow of information when faced with attacks from governments and other organizations around the world. A very local, but significant example has been going on for the last couple of years as the U.S. Legislature wrangles over access to the U.S. Social Security Death Index (SSDI). Various interests have used the SSDI as a political football to be kicked back and forth to support one agenda or another. In fact, one of the arguments in favor of limiting access to this record has been the free availability of the information to genealogists.

Well, governments will continue to be involved in all aspects of the record keeping and availability process and there will always be a conflict between those wanting to see and use the records and those wanting to keep them private for their own purposes whether it be governmental or academic.

In summary, technology and the societal changes caused by the technological changes are having a huge impact on genealogy today and will have in the future. Some trends can be seen and predicted but others will likely occurs in areas and is ways entirely different than anyone now can predict.

I am sure I will have more to say on this subject in the future. As usual, stay tuned.
Posted by James Tanner at 7:22 AM