Unfortunately, I cannot be in more than one place at one time (although I try hard at doing so) and I could not be in Provo for the Family History and Genealogy Conference and also in Colorado Springs for a Family History Expo. The number of conferences seems to be increasing and I am already booked for 18 events in the next year. Fortunately, The Ancestry Insider reported on some of the presentations in the Provo event. Two posts about presentations concerning upcoming changes in the FamilySearch.org Family Tree program merit close study: FamilySearch Family Tree Road Map presented by Ron Tanner and Merging People in FamilySearch’s Family Tree by Ben Baker. Both of these sessions were reported second hand by The Ancestry Insider, but he is very reliable and had access to the PowerPoints, so likely the main points are very accurate.

I thought it might help to point out which of the planned features have already been implemented and some of my thoughts on proposed new features.

The presentation by both Ron Tanner and Ben Baker included dozens of different items, some of which are only mentioned very briefly so details, for some, might presently be lacking. Here is a list of functions mentioned by The Ancestry Insider and attributed to Ron Tanner:

Helper Function: This is a feature already in use that allows sharing a user's screen without disclosing a password. Changes made to the data are attributed to the primary user, i.e. the one being helped. Here is a screenshot showing the link: 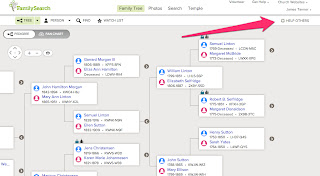 Associating a photograph as a source: This would be helpful if you could include images of documents not otherwise available online.

Migrating sources from New.FamilySearch.org (NFS) to Family Tree: Apparently, this is already in progress. I received an email asking if I wanted my sources migrated but haven't heard anything since. In some cases there are useful sources in NFS but most I have seen would be better left where they are.

Notes Section: Migrating Notes from NFS to Family Tree falls in the same category as sources. Some are valuable, some are not. It would work if you could delete meaningless notes.

Adding merging warning messages: This would be a good idea. Right now, it is easy to merge two individuals (assuming they are not IOUSs) and people can also be unmerged.

Setting preferred spouse: This can already be done. I just posted about this feature with screenshots.

Increase warnings for deleting a person: This does need to be done only when the person never existed. Otherwise, if the person is improperly merged the unmerging the individual is indicated not deleting. The consequences of deleting an individual need to be set out in detail.

List of top matching source records: This superficially sounds like a good idea. It is done by Ancestry.com but the danger is that the user will assume that the suggested sources are correctly identified, which may not be the case.

Automatic IGI Extracted Records source: This is similar to matching source records in general, if it chooses the right record, it would be a good idea. But, if the wrong records are chosen, it may create a misleading situation for those who cannot judge the accuracy of the records.

Separation from NFS: The day it occurs should be declared a national holiday.

Quality indicators: I definitely think this is a good idea. There should be a way to mark questionable data as well as rank sources according to reliability. But The Ancestry Insider indicates that what is meant by quality indicators are merely doing the math to see if the dates make sense. Helpful, but not as helpful as a scorecard ranking by users, sort of like movie reviews.

Impede changes to sourced individuals: I certainly would vote for this one. I think once a person has been documented to a certain level, basic information should be frozen and unavailable for change without some sort of application process.

Support for fixing bad NFS combines: This is one of the sore spots presently with FamilySearch. They are apparently overwhelmed with the number of bad combined records. It is unlikely that any progress will be made in this area until the programs are separated. Right now, if you have a bad combination of records, you have a very, very long wait before it will be fixed.

Internal messaging system: This was mentioned by The Ancestry Insider, but I am not sure what they mean. I assume it would be a way to communicate with other users inside the program. I thought we had this in the Discussion category.

Audio and video: I view the addition of audio and video files to be inevitable. This is more of a data storage issue than anything else.

Warring detection: Is this not available? This is a serious omission if not. This is an administrative issue not a user issue. Of course, the users get into a war, but it takes an administrator to stop the revert war and block changes.

Sharing ordinances: Good idea, but this is easier done with sharing the printed cards rather than creating an online system.

Bequeathing reservations: An interesting concept, but I think this carries the concept of "owning" the reservations too far. If you get into this area, you are, in fact, creating an ownership of the ordinance requests that may create more problems than it solves.

Google search of ancestors: Nothing stopping you from doing this now. I am not sure why this would benefit users of the program. Since a search on Google should include variations of the ancestor's name, I don't see that this would be a great feature to include.

Well, that is quite a list and I haven't even made it to the second post. Stay tuned.
Posted by James Tanner at 12:51 PM